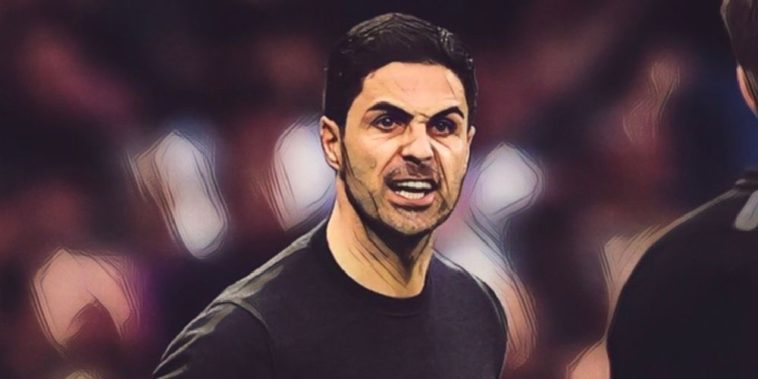 Arsenal’s top four hopes hit a bump in the road as they suffered a 3-0 loss to North London rivals, Tottenham.

It was a game that was due to be played back in January, though the rescheduling set up a perfectly poised top four shootout. Arsenal came into the game knowing that a win would confirm their Champions League qualification, while a Spurs win would move them to within a point of the top four places with two games to play.

After what was a tentative start to the high-stakes encounter, it was Spurs who struck the first blow as referee Paul Tierney pointed to the spot after Cedric Soares had clumsily bumped Heung Min Son off the ball inside the box. Harry Kane stepped up to face England teammate Aaron Ramsdale, before sending the Arsenal ‘keeper the wrong way to make it 1-0.

The goal seemed to rock the visitors, and in the 33rd minute, Rob Holding was shown a second yellow card in just seven minutes following a coming together with Son, leaving the referee with no option to flash the red as the Gunners’ disciplinary issues under Mikel Arteta reared its head once more.

Minutes after, and with Arsenal deciding against bringing Ben White on as a substitute, Spurs took advantage of their man advantage at a corner, Rodrigo Bentancur’s flick-on being met by Kane at the back post who stooped to nod home from close range for his 13th goal against the Gunners.

Within 90 seconds of the half-time restart, Spurs made it three as Kane produced some strong centre-forward play to hold off Gabriel in the box, before the ball rolled invitingly to Heung Min Son who stroked home to extend his side’s lead.

Spurs controlled the game from there on in, and while Arsenal had the odd half-chance, they never really looked like pulling a goal back, with the two sides separated by just a point going into the final two games of the campaign.

4 – Rob Holding made four fouls against Spurs leading up to his dismissal, with all four of them coming on Son Heung-min. His four fouls are the most he has ever made in a Premier League game, despite only playing 33 minutes. Unrestrained. pic.twitter.com/d8ksuoqslf

Speaking afterwards, Mikel Arteta insisted he was ‘proud’ of his players while refusing to discuss the decisions of the referee.

“I am not unhappy with my players. I am proud of my players. I want the referees to come in front of the camera and explain his decisions. It’s a shame because such a beautiful game was destroyed today.

“The decision was made. We can’t change it. The referee has to make a decision in football.”

After Holding’s sending off, Ben White appeared to start to get ready to enter the fray, though, for some reason, Arteta decided against bringing him on, with Arsenal going on to score quickly after.

“To take that risk [of bringing on Ben White] in the situation of the game made no sense,” he said. “Our focus is Newcastle. This game is history. He felt something so hopefully Ben will be fit and Gabriel will recover as we do not have enough players in the backline.

“This game is history. Now it’s Newcastle. This is gone. It went out of our hands and we have to accept it. Now we need to be the team that you saw from the beginning. You lose a football match in the conditions we lost them. It’s painful. But we have a huge match on Monday so we will try to beat them.

“We have two games to play each. It’s in our hands and now we have to do our jobs. We showed from the beginning in this game.”

Arteta is just not being honest with himself here, aside from Arsenal’s initial bright start Spurs soon got the measure of them, and outplayed them in every department. Holding simply could not deal with Son’s pace and ability and got his just desserts with two yellows in relatively short succession and deserved to go. This was a resounding performance from Tottenham showing just how capable they have become under Antonio Conte. For me it was clear from Arteta’s body language that he knew his team just had no answer against a rampant Spur’s