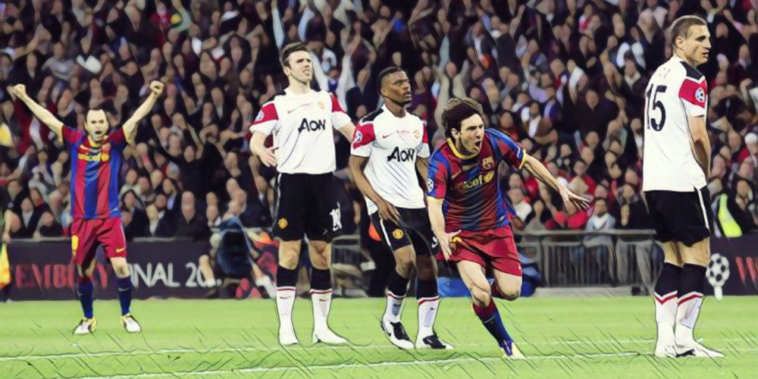 The UEFA Champions League final is the biggest fixture in club football, an occasion in which the planet’s finest go head-to-head in front of the watching world.

Great players rise to the occasion when the stage is at its biggest and throughout the modern era we’ve seen several stars produce defining performances in Champions League finals.

Thiabaut Courtois is the latest name to have written himself into the competition’s folklore, following a heroic goalkeeping performance in Real Madrid’s 1-0 win over Liverpool at the Stade de France.

Following his superb display of shot-stopping, we’ve decided to look back at five of the best individual performances in Champions League final history.

AC Milan’s destruction of Barcelona in 1994 remains one of the Champions League’s most iconic final performances, with the Rossoneri securing the biggest winning margin in a final despite heading into the clash as rank underdogs.

An understrength Milan side thrashed Barcelona’s fabled ‘Dream Team‘ 4-0 in Athens, as Fabio Capello’s side – who incredibly scored just 36 league goals on their way to winning Serie A – producing an uncharacteristically devastating attacking performance.

Dejan Savicevic scored a brilliant individual goal and was a stand-out, but it was arguably the performance of Marcel Desailly which inspired Milan to Champions League success.

🔴⚫️ #OnThisDay in 1994, AC Milan produced one of the great #UCLfinal performances before lifting the #UCL 🏆 pic.twitter.com/Yl6aZCCDXf

The midfielder became the first player to win the competition in back-to-back seasons with different clubs and was a domineering presence in the Milan midfield, overpowering the shell-shocked Spaniards in a brilliant final performance.

Desailly’s drive and determination was encapsulated with the fourth goal of the evening for Milan, as the Frenchman powered into the box to score a fine fourth and put the finishing touch on an unforgettable display from the Italians.

Steven Gerrard was often looked to for inspiration during a long career at Liverpool, perhaps never more so than the club’s captivating comeback against AC Milan in Istanbul.

Seemingly dead and buried after trailing 3-0 at the half-time whistle, Liverpool fought their way back into the Champions League final with Gerrard at the centre of their comeback.

Gerrard’s never-say-die drive led Liverpool’s revival, scoring a superb header to reduce the deficit and spark a frantic six-minute spell in which the Reds roared back to level the game.

He won the penalty for the third with a rampaging run into the Milan box and was an all-action defensive presence during the latter stages and extra time, plugging gaps at right-back following Steve Finnan’s half-time substitution.

The end result was Liverpool’s fifth coronation as European champions, after riding their luck to emerge triumphant on penalties.

Gerrard had previous for taking games by the scruff of the neck, but to do so on club football’s biggest stage – and against opposition as talented as AC Milan – etched his name into European Cup history.

Barcelona’s 3-1 win over Manchester United is often viewed as the best performance in Champions League final history, as arguably club football’s greatest ever side produced a display of spellbinding football at Wembley.

Lionel Messi was the architect of a performance that lives long in the memory, tormenting two of world football’s best centre-backs in Rio Ferdinand and Nemanja Vidic with a conductorial role as the Catalan’s free-floating false nine.

Messi was majestic with evasive dribbling and threaded passes, as the Red Devils struggled to get near a Barcelona team at the peak of their powers under Pep Guardiola.

The Argentine scored the crucial second with a driven effort from outside the penalty area, becoming one of a select group of players to have scored in multiple Champions League finals in the process.

The scoreline failed to reflect the true disparity between the two finalists and Messi was head and shoulders above everyone else on the pitch, one of the defining performances from a footballer many regard as the greatest of all time.

Gareth Bale was a notable omission from the Real Madrid team sheet for the 2018 final against Liverpool, named among the substitutes despite a past record in influencing big European occasions.

The Welsh winger was introduced on the hour and within minutes had made a stunning contribution, scoring one of the Champions League final’s all-time great goals with an outrageous overhead kick that flew beyond Loris Karius.

Bale added a second goal with a swerving effort from distance that Karius fumbled into his own goal, with his match-winning brilliance having changed the narrative of the final in Kyiv.

There have been better all-round performances than Bale’s brace, but few examples of a single player’s ability transforming the complexion of a Champions League final.

Thibaut Courtois has long been one of the world’s finest goalkeepers and reasserted that status with a heroic performance in Real Madrid’s Champions League win over Liverpool.

Courtois has enjoyed another superb season for the Spanish champions and capped off his campaign with an iconic performance, as Real Madrid held firm to edge a narrow 1-0 win in Paris.

Liverpool were the dominant side for much of the final and had 24 shots on goal in comparison to Real Madrid’s four, a huge nine of those finding the target and subsequent resistance of Belgium’s number one.

He made a brilliant save to turn Sadio Mane’s effort against the post and was a formidable frame in the Spaniard’s goal throughout, continually frustrating the Reds with moments of agility and commanding goalkeeping.

Courtois became just the third goalkeeper to be named as Man of the Match in a Champions League final and the first in more than a decade, following on from Oliver Kahn (2001) and Edwin van der Sar (2008).

Without him, it is almost certain that Real Madrid would not have been celebrating a 14th European crown.