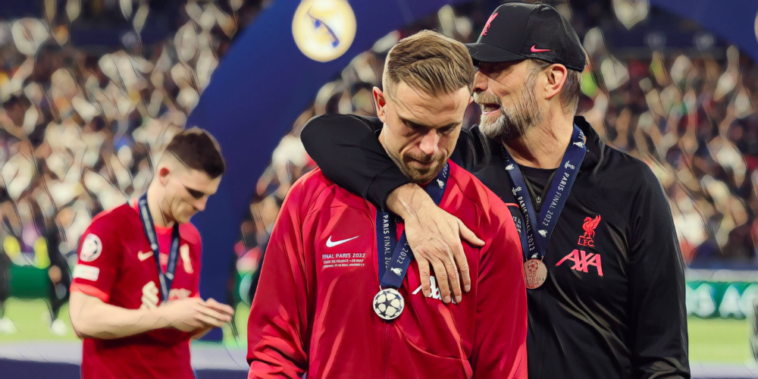 Liverpool suffered heartbreak in their hopes of winning the Champions League last weekend, losing out to Real Madrid at the Stade de France.

For the fourth time in five seasons and English side has ended up on the losing side in the Champions League final, with the Reds edged out 1-0 in Paris despite dominating the chances.

Following Liverpool’s loss, we remember the nine occasions in which Premier League teams have lost in the Champions League final.

Arsenal reached the Champions League final for the first time during the 2005/06 season, with the Gunners brilliant defensive record – keeping 10 consecutive clean sheets during their Champions League campaign – setting up a final showdown with Barcelona in Paris.

The North London side’s hopes suffered a cruel blow as Jens Lehmann became the first man to be sent off in a Champions League final, as the goalkeeper’s challenge on Samuel Eto’o saw him dismissed after just 18 minutes.

Despite their man disadvantage, the Gunners took the lead through Sol Campbell’s thumping header, but were unable to hold on as Barcelona – inspired by substitute Henrik Larsson – scored twice late on to seal a first European Cup since 1992.

🔝 Who was your man of the match❓@FCBarcelona | #MondayMotivation | #UCL pic.twitter.com/ocrXZRhWXp

Arsenal failed in their quest to become London’s first Champions League winners and have not been back to the final since.

AC Milan gained revenge for their 2005 Champions League final defeat against Liverpool with victory in Athens, exorcising their demons from an infamous collapse in Istanbul two seasons earlier.

Milan had lost on penalties despite leading 3-0 at half-time in the previous final meeting between the teams, though there was no repeat as the Italians saw out the win to be crowned champions.

Filippo Inzaghi scored twice for the Rossoneri, his first a fortuitous opener as Andrea Pirlo’s free-kick deflected off the forward to open the scoring.

Inzaghi sealed the win with a second eight minutes from time after rounding Pepe Reina, with Dirk Kuyt’s header a minute from time proving little more than a consolation for Liverpool.

The first-ever all-English final saw Manchester United and Chelsea meet in Moscow, with the Red Devils winning on penalties at a rain-soaked Luzhniki Stadium.

The two teams had fought out a tense title race with United coming out on top, before Sir Alex Ferguson’s side made it a famous double with Champions League success in Russia.

Cristiano Ronaldo’s towering header opened the scoring, though Chelsea hit back before half-time through Frank Lampard and a tight final went all the way to a shootout.

John Terry’s infamous slip saw him miss the chance to win it for Chelsea, before Edwin van der Sar saved from Nicolas Anelka and extended the Blues’ wait for European success.

Lionel Messi scored the second as he rose to head home Xavi’s cross and seal Barcelona’s triumph, ending a special season for Guardiola and the Spaniards who added the Champions League to their La Liga and Copa del Rey successes.

Two seasons later Barcelona and Manchester United renewed rivalries, in a performance which has become known as one of the great Champions League final masterclasses.

United were unable to live with Barcelona’s brilliance in a stunning performance from Pep Guardiola’s team at Wembley, as the Spaniards dominated the game with Lionel Messi in inspired form.

Messi was irresistible as the Red Devils failed to get near the Ballon d’Or winner, who orchestrated a free-flowing display from arguably club football’s greatest ever side.

“Nobody’s given us a hiding like that. In my time as manager, it’s the best team I’ve faced,” Sir Alex Ferguson memorably said following his side’s defeat.

Liverpool suffered a second final defeat of the Champions League era in 2018, losing out to Real Madrid as the Spanish side secured a third consecutive triumph.

No side had previously retained the trophy in the Champions League era before Real’s 2017 success, and the Spaniards sealed a hat-trick of successes thanks to Gareth Bale’s brilliance from the bench.

Sadio Mane had cancelled out Karim Benzema’s gift-wrapped opener for Real Madrid, before Bale came off the bench to score one of the greatest goals in Champions League final history.

The Welsh winger added a second following another goalkeeping mistake from Liverpool’s Loris Karius, as the record winners added a 13th European crown to their unmatched collection.

Liverpool bounced back the following season to win the Champions League under Jurgen Klopp, beating Tottenham in the second all-Premier League final.

A lacklustre final swung in the opening moments after Moussa Sissoko was penalised for a contentious handball inside the area, with Mohamed Salah stepping up to slam home the resulting penalty and put Liverpool ahead after just two minutes.

Both sides created chances but failed to find a breakthrough, until Divock Origi ensured a sixth European Cup headed to Anfield with a late second off the bench.

Origi – the hero of the semi-final win over Barcelona – fired home a low angled finish to end Klopp’s wait for a major trophy on Merseyside.

For the third time two Premier League teams contested the Champions League in 2021, with Chelsea prevailing to extend Manchester City’s wait for a maiden trophy.

Kai Havertz scored the only goal of the game as Chelsea were crowned European champions for a second time, latching on to Mason Mount’s pass to find the decisive breakthrough.

Pep Guardiola’s decision to start without a recognised defensive midfielder was criticised as the Spaniard’s wait for a third Champions League success extended to a decade.

Liverpool’s hopes of adding the Champions League to their FA Cup and League Cup wins ended in disappointing fashion in Paris last weekend, as Real Madrid found a way to win at the Stade de France.

Jurgen Klopp’s team dominated the chances but found Thibaut Courtois in inspired form, whilst the Reds failure to score meant that the club had been kept goalless in all three major finals in 2021/22.

Mohamed Salah had the best chances but was unable to find a way past Courtois in goal, as the Real Madrid goalkeeper produced a superb individual performance in the French capital.

Real Madrid celebrate with their supporters in the Spanish capital 🏆🎉#UCLfinal pic.twitter.com/dq2d1T5q3U

The defeat was a second major disappointment in just six days for Liverpool, whose quadruple chase had ended after the club also missed out on the Premier League title on the final day of the campaign.