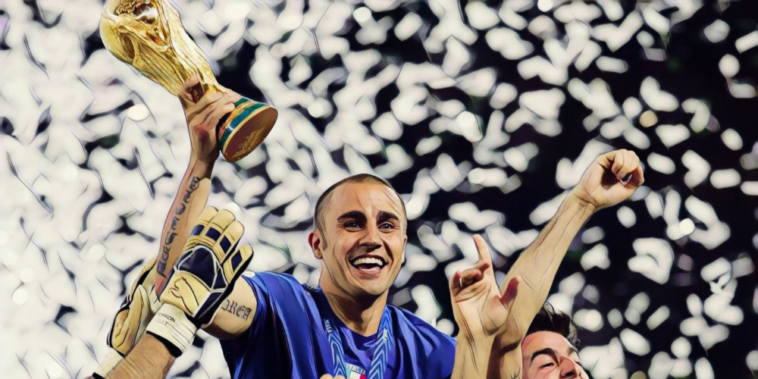 Manchester United have agreed a deal to sign Lisandro Martinez from Ajax, with the Red Devils set to pay a fee of £57m to sign the Argentina defender.

Martinez was named as Ajax’s Player of the Season in 2021/22 and will reunite with former manager Erik ten Hag in English football, as the Dutchman restructures his squad ahead of his maiden campaign.

Much has been made about the 24-year-old’s relative lack of stature for a centre-back, with the defender just 5ft 9in.

Central defenders have typically been towering in height, but some of the game’s all-time greats have lacked the physical attributes often associated with elite centre-backs.

Here are five of the best ever centre-backs under 6ft.

Franz Beckenbauer is an icon of the global game, having become a figurehead for German football and the first defender to win the Ballon d’Or, an achievement since matched on just two occasions.

Having began his career in midfield, Beckenbauer created his legend in a defensive role and is credited with revolutionising the ‘libero’ position, acting as a sweeper behind the rest of the backline.

Beckenbauer’s greatest successes at club level came with the great Bayern Munich side of the 1970s, with which he won four Bundesliga titles and the European Cup in three consecutive campaigns.

He made 584 appearances for the Bavarians, scoring 75 goals, and earned 103 caps for West Germany. At international level, he captained the national side to success at the 1972 European Championship, before winning the World Cup in 1974.

The first captain to win the European Cup, World Cup and European Championship, Beckenbauer – who stood at 5ft 11in – was an excellent reader of the game and distributed the ball with purpose from deep.

He was twice named as winner of the Ballon d’Or, earning a second success in 1976 after becoming the first defender to claim the accolade four years earlier.

Italian football has a lineage of defenders to rival any nation on the planet, with the Azzurri having long taken pride in producing elite defensive minds.

At the very top of the pantheon of Italian icons is Franco Baresi, whose elegant defending over a one-club career with AC Milan saw him write his name into the record books.

Baresi was a brilliant defender who used brain over brawn, a thinking defender who outwitted and outthought the world’s finest forwards at his peak.

Boasting a technique and composure that rivalled the game’s best midfielders, Baresi was the defensive lynchpin of Arrigo Sacchi’s dominant AC Milan side. He won six league titles in the colours of the Rossoneri and lifted the European Cup on three occasions.

Baresi – who had been rejected by rivals Inter Milan as a teenager – was nicknamed ‘Piscinin’ (little one) following his emergence into the Milan first team, before cementing his status as one of the game’s all-time greats.

The number six shirt remains retired at the San Siro in his honour.

Ronald Koeman was a unique defender, one who boasted a goal record comparable with leading forwards of his era.

Koeman won four league titles during spells with Ajax and PSV and won the European Cup with the latter, before joining Johan Cruyff’s revolution in Barcelona.

The Dutchman – who was capable of playing both as a defender and as a midfielder and became renowned for his long-range shooting – was a vital part of the ‘Dream Team’ era in Catalonia, scoring the decisive goal as Barcelona won their first European Cup in 1992.

He made 264 appearances in all competitions for the Spanish side and formed part of the Netherlands team which ended the nation’s wait for a major tournament at Euro ’88.

Fabio Cannavaro became the third defender to win the Ballon d’Or in 2006, with two of that trio having been under 6ft.

Cannavaro became one of Italy’s great defenders and captained the Azzurri to World Cup success, with Marcello Lippi’s side conceding just two goals – one an own goal and the other a penalty – on their way to being crowned world champions.

What Cannavaro lacked in height he made up for in timing and determination, often rising above taller forwards to win aerial duels with huge leaps.

At club level he won major trophies with Parma and Real Madrid, in addition to representing Italian football giants in Inter Milan and Juventus.

His finest football came in 2006, a year which saw Cannavaro win the World Cup as captain, the FIFA World Player of the Year, Ballon d’Or and Serie A Footballer of the Year awards, a remarkable sweep of success for accolades usually dominated by names further up the pitch.

Carles Puyol might not have been the most physically dominant or technically gifted defender, but he departed Barcelona as an undisputed club legend after a stunning one-club career in Catalonia.

Puyol made 593 appearances for Barcelona and collected a vast number of honours, winning 18 trophies with the Catalans including six league titles and three Champions League trophies

The centre-back was both an aggressor and a leader, never giving forwards a moment’s peace as he hounded opponents into making mistakes.

Having began his career at full-back, he switched to a central role and became the backbone of Barcelona’s success. Puyol’s raw love for defending defined his game and added a sense of security to a club side regarded as arguably the best ever during Pep Guardiola’s reign at the Camp Nou.

Success also arrived on the international stage, where he formed part of the Spain team that ended a 44-year wait for a major trophy at Euro 2008, before winning the World Cup for the first time in 2010.

Read Also – Rating every Argentinian to play for Manchester United