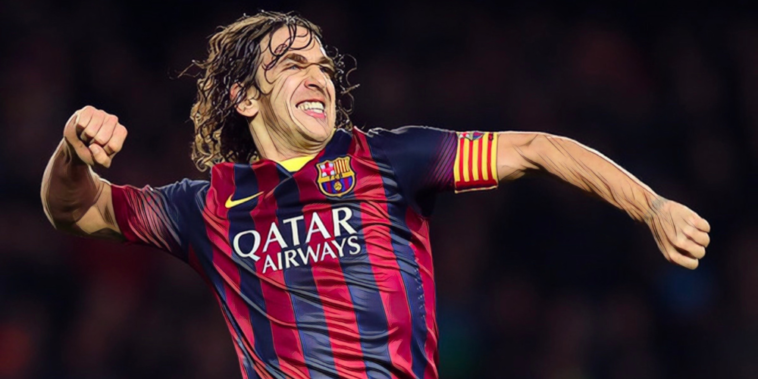 As Catalan cheers serenaded the newly-crowned European champions at Wembley in 2011, Carles Puyol removed the captain’s armband from his sleeve and placed it upon the bicep of Eric Abidal.

Abidal had missed much of the season as he bravely battled against cancer, before returning to the play his part in Barcelona’s Champions League final win over Manchester United.

For Puyol, it was the simplest of gestures, but one which visibly impacted the emotional Abidal as he hoisted aloft club football’s biggest prize.

That instance was a microcosm of the career of Puyol, a warrior on the pitch and gentleman off it. Across a decorated career as one of Barcelona’s all-time greats, the centre-back ensured the levels of his teammates never slipped. None, however, were ever left behind.

Puyol had to work harder than most to take his place among the club’s most revered figures. Born in Lleida, Catalonia, his was a late introduction into the world-famous academy system of the region’s footballing behemoth.

While future teammates in Xavi and Lionel Messi had several years of schooling at La Masia, Puyol arrived as a shaggy-haired 17-year-old who, whilst talented, was both raw and without a natural position.

He struggled to find a breakthrough during the late nineties and came close to an exit from the Camp Nou, after Barcelona accepted an offer from Malaga for his services in 1998.

Set on realising his dream, however, he turned down the move, arguably the first show of the strength of character that would later come to define him.

After working tirelessly to make an impression on Louis van Gaal, his senior debut came the following season, coming on as a late substitute at Valladolid.

The following season saw the defender earn acclaim for a brilliant El Clasico performance, as eternal rivals Real Madrid were beaten at the Camp Nou. A fixture that needs little amplifying had reached fever pitch as Luis Figo made his first return to Barcelona.

Figo had been an idolised figure in Catalonia before committing the ultimate treachery, moving to the capital club in a world-record transfer. Puyol, relentlessly robust throughout, allowed Figo little room to breathe in the hostility of a baying Barcelona crowd.

Puyol began to grow in stature, with the assets to his game soon making him a firm favourite. What he lacked elsewhere, he more than made up for with drive, determination and sheer will-to-win.

Taking pride in every appearance in the famous red and blue stripes, his anticipation and strength frustrated opponents as he bounded across the pitch – distinct flowing mane in tow – to crash into challenges.

Having broken into the senior side as a full-back, it was a shift to centre-back that truly unlocked the defender’s potential. Frank Rijkaard’s arrival as manager helped end a chaotic period at the Camp Nou, with the Dutchman leading Barcelona to a first league title in six seasons in 2004/05.

That campaign was Puyol’s first as captain, having been voted as the club’s chosen leader ahead of the new era.

Another league title followed in 2005/06, a season which also saw the defender claim Europe’s biggest prize. His staunch defending provided the bedrock of Barcelona’s Champions League winning team, as Arsenal were beaten in Paris to win the trophy for the first since 1992.

Rijkaard’s period of success failed to last however, with two seasons of underachievement following. Soon, however, would begin the defining period of Puyol’s career and perhaps Barcelona’s history.

Former teammate Pep Guardiola took charge in the summer of 2008 and his impact was nothing short of incredible. His debut season saw Barcelona conquer all before them, becoming the first Spanish side to win a Champions League, La Liga and Copa del Rey treble.

Puyol, intense and imposing, was the leader of their history-making side. Alongside him was Gerard Pique, who returned to Barcelona that summer after a four-year spell at Manchester United.

Having been schooled in La Masia he had tried his luck in England with modest success, but excelled under the guidance of Puyol as the older statesmen took his fellow Catalonian under his wing.

Pique paid a glowing tribute to Puyol upon his retirement, calling his centre-back colleague his ‘guardian angel’ in a social media post.

“I met you 6 years ago. You were the captain and the emblem of the team and I was just a kid arriving, set on conquering the world,” Pique wrote on Facebook.

“From day one we had a great relationship, both on and off the field. By your side I felt protected and I knew that if one day I made a mistake you’d always be there to save me. You were my guardian angel.

“I know that I will miss our talks in the locker room, your advice and especially you giving us hell on the pitch. You are unique; a one-off. I find it amusing when they talk about signing “the new Puyol”. They can look all they want, but they’ll never find it.”

Puyol had returned to begin his first pre-season under Guardiola as a major tournament winner with Spain. La Roja travelled to Euro 2008 as one of the favourites, but were a team scarred from past disappointments.

Regarded as one of international football’s great underachievers, a summer of superb football ended with Spain crowned European champions – securing a first major tournament success since 1964 – and with Puyol named in the Team of the Tournament.

Spain’s success was followed with a World Cup triumph in 2010, as La Roja were crowned world champions for the first time in South Africa. Puyol produced one of the tournament’s defining images, rising magnificently to head home the semi-final winner against Germany.

🗣️ “At half-time ‘Puyi’ said, ‘We’ve had three or four corners. Put the next one near the penalty spot and I’ll come charging,” recalled Xavi.

Once again Puyol was a commanding figure in a dressing room that, despite fierce club rivalries and political differences, united in collective ambition.

Injury ruled the centre-back out of Spain’s unprecedented third major tournament in succession at Euro 2012, with the last of his century of caps coming in 2013.

Back at club level, the trophies continued to arrive at a stunning rate and Guardiola’s team evolved to new levels. Regarded as arguably the greatest club side of all time. While the fluidity of the football was frightening, their success was nonetheless built upon the axis of Puyol and Pique in central defence.

Aggressive but fair, Puyol was an example and ensured nothing less than 100% was ever deemed acceptable. His clenched fists and bellowing roars became a familiar sight, with his drive to win infectious.

Fitness problems began to plaque Puyol towards the latter period of Guardiola’s reign however, and he featured only as a late substitute during the aforementioned 2011 Champions League final win.

When humbly handing the trophy over to Abidal, it was the third time he had celebrated becoming a European champion.

It was a compassionate act he repeated in 2013 when allowing Abidal, recently recovered from a liver transplant, and manager Tito Vilanova, suffering from throat cancer that would sadly claim his life, to lift the La Liga trophy.

That success was the sixth title win of Puyol’s career and sits among 18 major honours won in club football, alongside his prominent role in Spain’s greatest triumphs.

Eventually, as time and recurring injuries brought an end to his career at the Camp Nou, he decided to walk away from a club that had been all he had ever known.

One-club icons are a rarity in modern football, rarer still when at a club of Barcelona’s size and in an era where the football on show appeared alien at times. It is a testament to Carles Puyol and his heart-on-sleeve heroics that he departed the game regarded as one of Catalonia’s favourite sons.