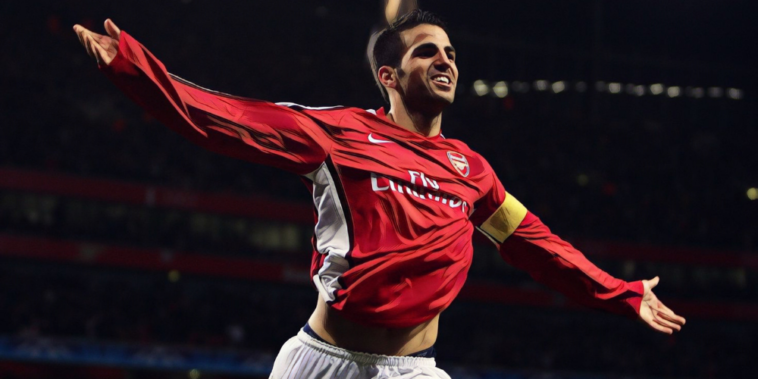 Arsene Wenger’s faith in emerging talent saw several stars flourish under his guidance, with the former Arsenal boss having been insistent that his side created and not coveted superstar footballers.

From unknown quantities captured from foreign markets to promising prospects with room to grow, Wenger had an eye for unearthing talent and in the signing of Cesc Fabregas pulled off one of his greatest market masterclasses.

Concerned with the hurdles in his path to first-team football at Barcelona, the midfielder moved from La Masia to London in search of a clearer route to stardom, signing for Arsenal as a teenager.

Across the next eight seasons Fabregas emerged as the lead of a new generation at Arsenal, as the Gunners looked to transition from the success of the club’s double-winning and Invincible sides of the early 2000s.

Fabregas’ decision to move to England was vindicated as he became Arsenal’s youngest-ever first team player when making his debut, aged just 16 years and 177 days.

After featuring regularly the following season, the departure of Patrick Vieira to Juventus in 2005 soon accelerated both the break-up of the Invincibles and Fabregas’ development, with Wenger placing his faith in the untested teenage Spaniard.

He featured prominently as the Gunners reached the 2006 Champions League final, before being named as Arsenal’s Player of the Season in consecutive campaigns in the seasons that followed.

The latter of those saw Fabregas named as the PFA Young Player of the Year in 2007/08, but it was two seasons later when we saw the peak of the midfielder in Premier League colours.

As the lead figure in Arsenal’s new generation and the symbolic representation of the aesthetic perfection Wenger sought in his side, the 2009/10 season was Fabregas at his quite brilliant best.

His sensational season began from the very first whilst as Arsenal thrashed Everton on the opening weekend, securing a 6-1 win at Goodison Park that saw Fabregas – now wearing the captain’s armband – devastate their Merseyside opponents.

Fabregas scored twice – his second after running from inside his own half – and created two more as the Gunners produced a scintillating showing of attacking football, cutting apart Everton with clever combinations to equal the joint-biggest opening win in Premier League history.

Fabregas continued to prove the creative heart of Arsenal’s emerging side, leading a talented if inexperienced side that contained names such as Samir Nasri, Robin van Persie and Theo Walcott.

He struck again as Arsenal bounced back from successive defeats to the Manchester clubs to beat Wigan, before providing the assist as the Gunners edged Fulham 1-0 at Craven Cottage.

The Arsenal sides of the era mixed performances of spellbinding football with a soft underbelly, but when in the mood there were few better sporting spectacles than the red-shirted Gunners combining in free-flowing fashion.

Wenger’s side were fun but fragile, often unstoppable but occasionally unrecognisable, their balance shifted rather more towards guile than grit.

When on song, however, it could be footballing fantasy and Blackburn found themselves on the receiving end of an electric Arsenal performance during an early October meeting in 2009.

Fabregas was again the architect of a 6-2 thrashing for the north Londoners, scoring once and creating four goals for his teammates as Wenger’s side ran riot at the Emirates.

His goal was special, a sweet strike to lash a bouncing ball home from the edge of the area, whilst his full range of passing was on show as he carved open the visitors were awareness and accuracy. He remains one of just seven Premier League players to have registered four assists in a single fixture.

He added another special goal before the end of October, this time in a north London derby with Tottenham on home soil.

Fabregas’ game has often revolved around the intricacies of his passing range, but his goal to take the game away from Spurs showcased the individualism also amongst his armoury.

Arsenal emphatically questioned Spurs’ challenge to their north London supremacy with a 3-0 win, scoring twice inside just 11 seconds during a dramatic end to the first half.

Robin van Persie had opened the scoring after meeting Bacary Sagna’s cross, before Fabregas doubled the advantage with a stunning solo goal from kick-off to put Arsenal in control at the break.

Wilson Palacios gifted possession to the midfielder, who charged through a succession of Spurs challenges to fire home as the visitors pressed the self-destruct button against their fiercest rivals.

When Fabregas tore Tottenham apart all by himself 🤯pic.twitter.com/E0QjrPpspS

Fabregas was also leading Arsenal’s campaign in the Champions League’s group stages, scoring three times across the Gunners opening four fixtures, in addition to laying on crucial assists against both Standard Liege and Olympiacos.

His performances helped Arsenal to the quarter-finals, though their challenge was ended by European champions Barcelona and the brilliance of Lionel Messi in the last eight.

In the post-Invincible era it had become Fabregas who took on talismanic status, a match-winning intervention off the bench against Aston Villa amongst his finest moments of the campaign.

Named as a substitute given a hamstring issue, Wenger called upon the club captain with the game goalless and Fabregas delivered with a brilliant brace. He bent home a fantastic free-kick to open the scoring, before netting a second with a first-time finish to put the result beyond doubt.

Fabregas had led a new generation of midfielders, small in stature but huge in influence. The all-action midfielders that had dominated the Premier League had a new challenge, with the Spanish schemer quick in his footwork and even quicker in mind.

Content to receive possession in any area and at any angle, his technical talent saw him manoeuvre through opposition engine rooms before finding the perfect weight of pass.

His latter years – including a spell at Chelsea – saw him mould more into a deep-lying dictator, setting the tempo of clashes from the base of the midfield. In an Arsenal shirt, however, he was often the driving force of their most devastating displays.

Still just 22 years old, he had emerged as one of the most effective players in the Premier League, with only Frank Lampard – in the midst of his best goalscoring campaign for Chelsea – outscoring Fabregas amongst midfielders.

Lampard (14) was also the only player to provide more than Fabregas’ 13 assists in the division, though the England international featured in eight more fixtures than the Arsenal midfielder, who saw his campaign curtailed as a result of hairline fracture.

The premature ending to Fabregas’ stunning season did not prevent his inclusion in the Premier League’s Team of the Season, however, a just reward for a footballer who reached new levels as the north London side’s inventive centre-piece.

From cute and cutting passes to marauding runs into opposition penalty boxes, Fabregas was often sublime during a season in which he registered 40 goal involvements in just 37 appearances across all competitions.

Arsenal’s failure to win silverware has perhaps seen Fabregas’ finest football in the club’s colours become overlooked, but there is little doubting his best performances saw him star as one of the Gunners’ great modern talents.

The lure of Barcelona ultimately proved too strong in the summer of 2011, with Fabregas departing for a dream return to Catalonia in pursuit of silverware.