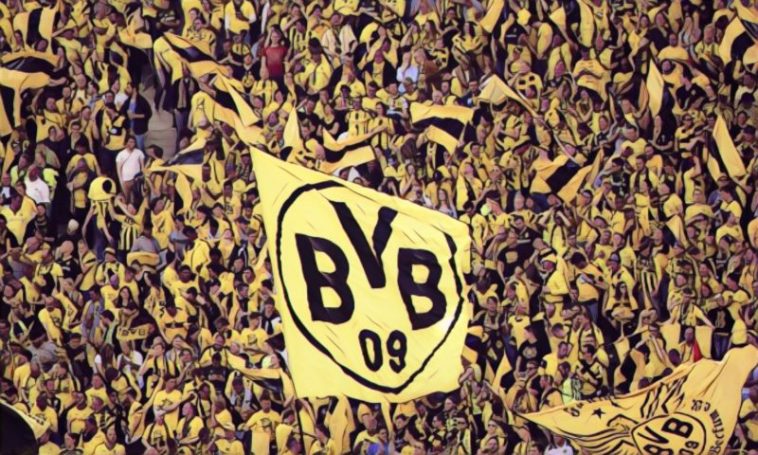 Could Ultras fan culture improve the atmosphere at Premier League grounds, or is it a performative production that adds little to the ebb and flow of a match?

Fans of Borussia Dortmund may have left London disappointed after their beloved club were demolished 3-0 by Spurs in the opening leg of their Champions League last 16 clash on Wednesday night, but they certainly arrived intent on creating a special atmosphere at Wembley.

As did fans of Paris St. Germain, who filed into England’s northwest armed with flares, flags and drums, ready to raise the noise level by several hundred decibels while their team defeated Manchester United 2-0 at Old Trafford.

PSG ultras now in full voice – Liverpool fans will tell you, they are something special! pic.twitter.com/SMFOlI0jwk

Safe to say PSG fans have taken over Exchange Sq. this song has been going on for about 10mins. Loads of red flares. Guy with a loudspeaker. @MENnewsdesk pic.twitter.com/VNsPLgkldB

While BVB fans are more well known for their creative displays and full voiced chanting than their Parisian counterparts, both sets of supporters embodied the Ultras culture that follows the two teams wherever they play.

The absence of such a culture in English football means that a substantial number of fans in this part of Europe tend to look on in awe whenever Ultras groups arrive for a game, commending them for the atmosphere they create, as happened this week.

Dortmund fans at Wembley easily drowning out Arctic Monkeys on the stadium PA feels like a sad metaphor for the respective states of English and German football culture.

Haha look at contrast between the Dortmund and Spurs fans here😂

Not everyone is enamoured by Ultras culture, however, with some criticising it for monotonous chanting, while others suggested it does not create the kind of genuine crowd reactions one might see at a game in England.

Unpopular opinion: The ultra fan thing looks and sounds impressive but because its constant and does not change as the game changes, it essentially becomes white noise and I'm not convinced lifts teams or actually creates the most exciting atmospheres. You need peaks and troughs. https://t.co/N4KIPqYwXK

The modern football fan seems obsessed with these types of displays. As if a match can only have an atmosphere if there is loads of flags, flares and stuff. https://t.co/sZSAerTURO

Some of these points are not without merit, but they miss the precise rationale behind the praise; the sanitisation of English football grounds since the early nineties and the sterile atmospheres that inhabit them, particularly in the top flight.

The transition of terraces into all-seater stadiums following the Taylor Report, published in the aftermath of the Hillsborough disaster, has had a major effect. The advent of the Premier League and subsequent pricing out of younger fans has contributed to the quieting of the masses as well.

That’s without even mentioning modern stadia, which have evidently had a detrimental effect. Wembley, the scene of Spurs midweek rout, has been characterised as a soulless bowl and is relatively typical of the type of stadium being built in recent years.

These same factors inspired Dortmund’s The Unity and the Collectif Ultras Paris to drum up an atmosphere at games.

Renovations to the Westfalenstadion over the past couple of decades have sucked much of the noise out of the stadium, while the sheer size of the Sudtribune — where the famous Yellow Wall resides — also mean that the ultras have to work twice as hard to make as much of a clamour. Fortunately for the fans, the club had their best interests in mind when a decision had to be made on keeping the south stand a terrace or not, even though they could make more money with seats.

Les Parc des Princes, meanwhile, suffers from the influx of tourists and celebrities that have glommed onto the PSG bandwagon since Qatari oil money turned the club into a superpower.

While there is a sense of self-consciousness in the pageantry of it all, that the fan groups are performing for a wider audience, one cannot deny that this kind of fan culture could immediately add something to — if I may be permitted to use the language of marketers — the matchday experience. Dave Gould’s argument that it doesn’t “lift teams”, however, is apocryphal, and while peaks and troughs add to the flow and reflect the tension of a game, the peaks are far too rare while the troughs are all too frequent in Britain.

One other factor that is not being considered in the criticisms either, is that of identity. While one does not need to beat a drum or wave a flag to feel a connection to a club, being able to identify with each other in such a way as Borussia and PSG fans do, expressing their esprit de corps with such colour and energy, is something for which many fans of Premier League clubs clearly yearn.

If British football supporters are reticent of importing the Ultras culture yet still want to improve the atmosphere at their club’s ground, they need not ape or imitate their European counterparts. What’s most important is fans organising and working with the club to get what they need. We have already seen this with the Green Brigade at Celtic and, to a lesser extent, the Holmesdale Fanatics at Crystal Palace, both of whom have brought a continental vibrancy to their respective stadia.

However one chooses to roar their team on, the first step is organisation. After that, everything else follows.