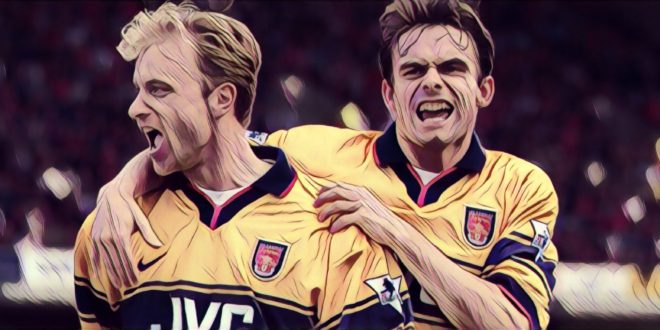 For a country with a population of roughly just 17 million people, the Dutch tend to produce some seriously talented footballers.

Since its inception in 1992, the Premier League has hosted some of the finest talent from across the North Sea, with a whole host of Oranje internationals making a huge impact on English football.

We’ve decided to create an all-time Premier League Dutch XI, and whilst the 3-4-1-2 formation favours flair over balance, it’s quite some team…

It took Sir Alex Ferguson six years to fill the Peter Schmeichel-sized void between the posts at Old Trafford, with a series of replacements having failed to convince.

Signed from Fulham for just £1.5m, the veteran goalkeeper proved one of the Scot’s shrewdest purchases. A calming presence and excellent shot-stopper, Van Der Sar won four league titles and the Champions League during six years at Old Trafford.

A versatile player capable of playing across the back and in midfield, the Dutchman spent ten seasons in the Premier League with spells at three different clubs.

After five seasons at Chelsea, Melchiot departed Stamford Bridge shortly before Jose Mourinho and their maiden title arrived, but was a reliable and dependable performer across his career in English football.

Stam was a formidable defensive presence, winning three league titles, one FA Cup and the Champions League in three seasons at Old Trafford.

He departed for Lazio in 2001 in acrimonious circumstances, a decision Sir Alex Ferguson later described as a mistake. Despite his relatively short spell in the Premier League, the towering centre-back is widely recognised as one of the competitions greats.

The world’s most expensive defender following his £75m move to Anfield in 2018, Van Dijk has since established himself as one of Europe’s finest centre-backs.

A once leaky Liverpool backline has been transformed by the commanding defender, whose strength, reading of the game and leadership have him earmarked as a future Reds captain.

Having arrived in English football in the twilight of his career, Gullit began life at Stamford Bridge as a sweeper. Manager Glenn Hoddle soon realised the veteran could still influence games from midfield, and Gullit soon shone once restored to a more familiar midfield role.

Runner-up to Eric Cantona for the 1995 Player of the Year award, Gullit proved to be one of the pioneering foreign signings of the Premier League era.

Having been squeezed out of the Real Madrid picture by the likes of Kaka and Cristiano Ronaldo, classy playmaker Rafael Van Der Vaart arrived at Tottenham in 2010.

He departed in 2012 for former club Hamburg, a move he later described as a mistake.

Perhaps the best of Robben came post-Premier League, but the Dutch winger was still a true talent during his time at Chelsea. Signed as a 20-year-old from PSV in 2004, the wide man was an influential presence as Jose Mourinho and the Blues secured back-to-back Premier League titles in 2004 and 2005.

He left in a £24m deal to Real Madrid in 2007 before enjoying 10 trophy-laden years at German giants Bayern Munich.

Voted the 12th greatest player in Arsenal’s history despite spending just three years at the club, ‘Flying Dutchman’ Overmars terrorised full-backs during his short spell in the Premier League.

Part of Arsenal’s double-winning team of 1997-98, he scored a crucial winner to beat Manchester United as Arsene Wenger’s side came from behind to pip Alex Ferguson’s to the title before later scoring in the FA Cup final that year.

He left Highbury to join Barcelona in 2000.

Perhaps the greatest Dutch player to have graced the Premier League, Dennis Bergkamp was the influential heartbeat in Arsene Wenger’s great Arsenal teams.

Having arrived from Inter Milan in 1995, Bergkamp lit up the Premier League with deft touches and stunning goals, forming lethal partnerships with Ian Wright and later Thierry Henry.

He won three Premier League titles and four FA Cups in North London, where a statue of the forward now sits outside The Emirates Stadium.

Manchester United had to wait a year to secure the services of prolific forward Ruud Van Nistelrooy after a major knee injury delayed his move from PSV, but the then British-record signing certainly proved worth the wait.

After falling with an up and coming talent by the name of Cristiano Ronaldo, Van Nistelrooy was sold to Real Madrid in 2006.

For a player of immense talent, Van Persie’s 11 years in English football delivered very little in terms of team silverware. Eight years and 132 goals at Arsenal saw the forward win just one FA Cup, and when the opportunity arrived to join Sir Alex Ferguson’s Manchester United in 2012 Van Persie took his chance.

He left English football to join Turkish side Fenerbahce in 2015, having twice won the Premier League Golden Boot in 2011/12 and 2012/12 and being named PFA Player of The Year and FWA Footballer of the Year in his final season at Arsenal in 2011/12.