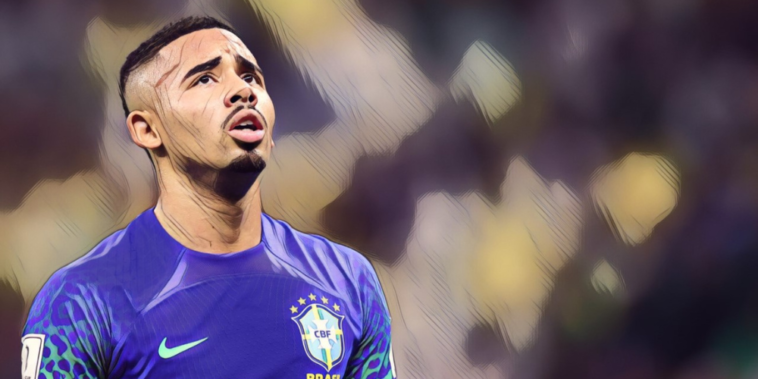 Arsenal are sweating on the fitness of Gabriel Jesus after the forward was ruled out of the World Cup with a knee injury.

Jesus has left the Brazil squad in Qatar to return to London, after sustaining a knee injury during the 1-0 defeat to Cameroon. The Gunners will discover the extent of Jesus’ issue when he reports to the club’s training ground on Monday for assessment.

According to the Sun, Arsenal are fearful that Jesus’ could be out for up to three months and scans will decide whether the 25-year-old requires surgery.

His extended absence would be a massive blow for Mikel Arteta’s side, who sit top of the Premier League. He is not expected to return before the new year and could be absent for crucial clashes against Tottenham and Manchester United next month.

Jesus has impressed since his summer arrival from Manchester City, having recorded five goals and five assists in 14 league appearances.

Eddie Nketiah will be expected to replace Jesus in the side, with Arsenal lacking alternatives at centre-forward.

Nketiah has failed to start a Premier League fixture so far this season, but has three goals in seven starts across the League Cup and Europa League.

Read – Five of the most memorable World Cup surprise packages