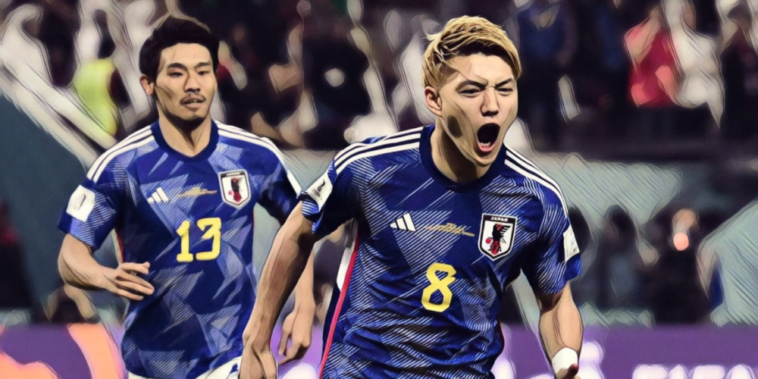 Japan take on Croatia in the World Cup’s last 16 on Monday, with the Samurai Blue having been one of the surprise packages of the tournament to date.

Hajime Moriyasu’s side will be looking to take another significant scalp against Croatia, who reached the final four years ago in Russia.

So for those of you interested in gambling and online casinos, we preview the fixture’s best betting odds.

Despite claiming impressive group stage wins over Germany and Spain, Japan remain underdogs ahead of a fixture with the 2018 runners-up.

Croatia are unbeaten in nine consecutive fixtures, having last tasted defeat to Austria during the U|EFA Nations League in June. That run has included wins over Denmark (2) and France, while both Belgium and France were also held to draws.

Zlatko Dalić’s side have conceded just once in the tournament so far, keeping clean sheets during their group stage clashes with Morocco and Belgium. Japan, meanwhile, are without a clean sheet despite progressing as Group E winners.

The two teams have met just three times previously, with the results evenly shared at one win each and one draw. In the World Cup meetings, Croatia are unbeaten in two encounters. Their most recent was in the 2006 edition in Germany as the teams played out a goalless group stage draw.

None of the last-16 ties have required extra time to date, with the Netherlands, Argentina, France and England all booking a place in the quarter-finals within 90 minutes.

Should Japan vs Croatia need an additional period, the Asian nation are 13/8 to qualify by any means for the next stage. Croatia are odds on, at 1/2.

Who would lead the line for Croatia was a source of contention heading into the tournament, with Zlatko Dalić possessing a wealth of options. Andrej Kramaric has started each of their three fixtures and scored twice in the 4-1 win over Canada. The Hoffenheim forward has 22 goals at international level and is the bookmakers’ favourite to open the scoring at (11/2).

Ivan Perisic – Croatia’s third-highest goalscorer of all time – can be found at 7/1, while Takuma Asano is the shortest priced Japanese player to open the scoring at 15/2.

Luka Modric (9/1) is expected to take penalties for Croatia and could be an intriguing option. Elsewhere, Daichi Kamada has had a slow start to the tournament but shone in the second half of the win over Spain. The 26-year-old has been in excellent form for Eintracht Frankfurt this season with 12 goals in all competitions and is 10/1 to open the scoring.

Ritsu Doan has scored 50% of Japan’s goals at the World Cup so far, coming on as a substitute on both occasions.

Impact from the bench. 💥 pic.twitter.com/ohDe6xlEUV

Ritsu Doan – who came off the bench of equalise against Germany and Spain in Japan’s famous comeback wins – will hope to have done enough to earn a start and is also at 10/1.

Luka Modric (13/2) made more fouls per game (2.3) than any other Japan or Croatia player during the group stage, with Marcelo Brozovic (3/1) and Wataru Endo (4/1) next highest with an average of two fouls per game.

Croatia’s three fixtures had an average of six corners per game during the group stage, with none of their 2022 World Cup clashes having exceeded eight corners to date.

Japan’s three fixtures saw more than eight corners on just one occasion, during the 2-1 win over Germany (12). Their most recent win against Spain saw the Samurai Blue fail to win a single corner.

Japan’s comeback wins over Germany and Spain saw the Samurai Blue trail at half-time, before second half fight-back secured famous victories and progress to the last 16.

Hajime Moriyasu’s side are 33/1 to repeat that feat against Croatia, while another score of 2-1 to the Japanese can be found at 14/1.

Croatia’s sole win of the tournament so far also saw them come from behind to win, though the Checkered Ones were ahead at half-time after responding rapidly to Alphonso Davies’ early goal for Canada.