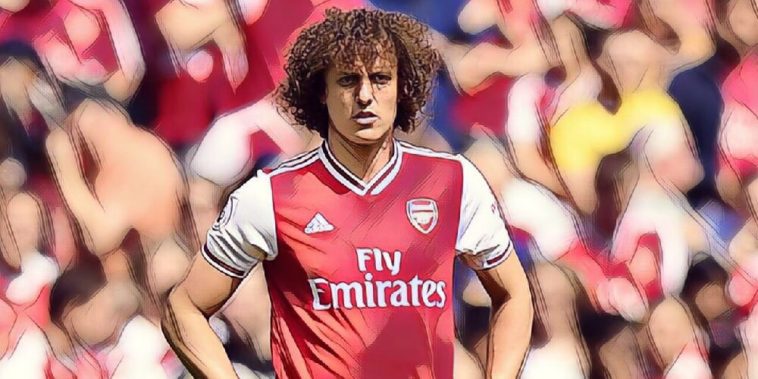 On transfer deadline day Arsenal were congratulated by some for what was seen as the shrewd acquisition of veteran central defender David Luiz from Chelsea.

Unai Emery was about to embark on his second season in North London and was charged with correcting a leaky Arsenal defence that had shipped an unhealthy 51 Premier League goals in 2018/19.

Luiz was seen as an experienced head to come in and give the Gunners that bit of leadership and guidance they so desperately needed. Or so that was the theory anyhow.

11 matches into the new season and that £8m fee is starting to look like money that could have been better spent elsewhere. Worse still, Arsenal’s porous defence continues to be their glaring and obvious Achilles heel. It’s a problem that has not been improved by Luiz’s addition to the ranks. With uncertainty now starting to shroud the former PSG boss’s future in North London, the decision to sign the big-haired, erratic Brazilian defender could well prove to be very costly indeed for Emery.

It has been common knowledge amongst Premier League fans for a while that Luiz is a bit of a live wire. His talent going forward and distribution with the ball is not in question, but that is not what Arsenal needed this season. Their fragile defence had chimed in with a combined 13 errors leading to goals during 2018/19 and the likes of Shkodran Mustafi and Sokratis Papastathopoulos did little to inspire confidence that a corner had been turned as Champions League football evaded the club once again.

The loss of veteran defender Laurent Koscielny’s in the summer left Emery with a void to fill and his decision to invest his faith in Luiz made sense to a degree on the surface of things. The 32-year-old had a mound of top-class experience with Chelsea and PSG. He was a serial prize winner and seen as a big character who may be able to inject some much needed know-how into a depleted back four.

However, his erratic and at times ill-disciplined approach to the art of defending was well documented. From Gary Neville’s infamous “PlayStation” rant on Sky to his up and down reputation with the Brazil national team after he started that infamous 7-1 defeat to Germany in the World Cup back in 2014, this was a player who wasn’t exactly going to be a silver bullet solution for Arsenal and their charitable defending.

Arsenal fans already have a decent sample size of games to draw off this season as they try and gauge where their club is headed. Their ratio of goals conceded per match is already higher at 1.36, than it was in their last campaign. 15 goals have been shipped in the league, and they have surrendered the leads on a regular basis.

Arsenal have failed to win despite holding a two-goal lead in three of their last 11 matches.

Before that, they did it twice in 370 matches.

None of this makes for encouraging reading and while the fault cannot be left solely at Luiz’s door, his arrival has simply not had the desired effect. Any good side needs a stoic defender to come in and marshal the back four into shape and consistency.

Liverpool have flourished since they signed Virgil Van Dijk, Manchester United have looked better at the back since Harry Maguire arrived, while their city neighbours look a little less formidable without the commanding Aymeric Laporte at the back.

Now it’s obvious that Luiz was never as good defensively as any of the above examples but the principle is the same; the Gunners needed a leader, a figurehead at the back if they were to break the crippling repetition of their horror show defending. His arrival has not engendered any more confidence in his defensive colleagues and he is not exactly barking orders out to those around him on the pitch.

Arsenal's centre-backs have been finding the net early… just not always the right one. 🙃 pic.twitter.com/MBzcuf5ttc

That Arsenal opted to shell out £70m on rapid winger Nicolas Pepe whilst trying to play the savvy transfer card when they bagged Luiz on a cut-price deal says a lot about their current football priorities. You cannot help but feel they have this the wrong way around.

Emery has not been able to fix the blight at the back and it could well prove to be the end of him at the Emirates. The Spaniard’s mantra and plans for moving the club forward already seemed a little muddled, and the fact he has been unable to even address the glaring defensive issues he faced when he succeeded Arsene Wenger in 2018 is damning to say the least.

Luiz is a not a bad option for your squad as third or fourth choice but his days of winning titles look to be in the distant past, as do Arsenal’s if they continue with their costly policy of playing health hazards at the back.

Rating every Arsenal captain of the Premier League era

Five of the most notorious divers in Premier League history