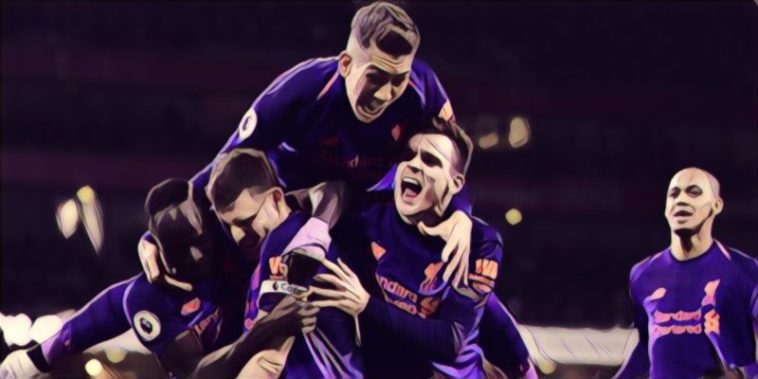 An evenly matched encounter between Arsenal and Liverpool ended in stalemate. Liverpool thought they had the winner through James Milner but it was cancelled out by Alexandre Lacazette as the Gunners threw everything they had at the Reds.

Here are five things we learned…

A Clash of Styles

The control of the match went back and forth between the two teams as a contrast in style meant each team had to bide their time. Arsenal tried to play the game in a typically Unai Emery style with quick and frequent passing. However, they continuously came up against a brick wall when they got as far as the Liverpool defence.

On the other side was Liverpool who played a significantly more direct style. The Red’s initial thoughts were always to try and play Salah in behind the high Arsenal line. Due to the threat of Bellerin, Mané was forced to track back and as such, left Salah isolated.

Where the teams clashed was when the ball was in the midfield area. Arsenal were outnumbered three to two in midfield and consistently lost the ball as they tried to play it around the extra man. When Liverpool won the ball back, they were often too rash in their decision making resulting in possession turning over again as Arsenal were able to advance up the pitch.

Arsenal and Liverpool have both looked impressive in the league this season but the difference between them and title favourites Manchester City is their inability to dominate the game by playing it on their own terms. This match was very evenly contested and is why they will probably have to work harder if they are to be champions come the end of the season.

Fabinho Out of his Depth

With injuries to Jordan Henderson and Naby Keïta, Liverpool were left with a midfield three of Fabinho, Milner and Wijnaldum. Fabinho should theoretically have fit in perfectly to this game as his physical presence should have taken Ozil out of the game and limited the influence of Lacazette.

What transpired though was Fabinho completely misreading the game and unable to contribute to the overall team effort. The Brazilian clearly needs time to adapt to life at Liverpool. The pressure he was under meant that he didn’t have time to look up and find a teammate which would have come instinctively if he had spent more time in the starting XI.

His performance did improve in the second half however. Fabinho seemed to grow into the game as he won possession back more often. Strangely the booking he received improved the quality of his game. Fabinho went from consistent fouling to more well-timed tackles as he had to concentrate more to avoid a second yellow.

During the last few years of Arsene Wenger’s reign at Arsenal, the Gunners were synonymous with defensive frailty. That has improved somewhat under Unai Emery but they still found life difficult against a strong opposition.

A number of mistakes when in possession of the ball and a lapse in concentration particularly at set-pieces blighted what otherwise would have been a very strong performance from Arsenal. The centre-back pairing of Mustafi and Holding did well in the most part but there were far too many errors to warrant a clean sheet.

Arsenal are only a few months into a new chapter for the club with Unai Emery at the helm and he should be commended for the improvement throughout the team. However, it’s clear there could still be some improvement in defence and he deserves plenty of time to make that happen.

To those who paid a close attention to Liverpool may have noticed that they played an unusually high number of formations throughout the match. It was most likely caused by Klopp and his coaching staff unsure how to deal with the threat that Arsenal posed. The result though was a severe lack of fluidity and consistency as they struggled to control the game.

Following the goal though Liverpool were constantly altering their formation. In some ways, it paid a lot of respect to Arsenal as the alterations usually came about as Arsenal made increasingly more offensive substitutions. Had Liverpool stuck to their most successful formation during the match it may have been a different outcome.

In Lacazette’s time at Arsenal under Wenger, he struggled to get going and never showed the true ability that he possessed. His struggles under Wenger and rise under Emery mirror Arsenal as a whole.

The striker was in incredible form at Lyon and has rediscovered it under Emery, the only time he struggled was under Wenger. He struggled to get the best out of Lacazette which backs up the belief that it was the time for the manager to leave.

With Lacazette at his best, Arsenal are a completely different proposition. Many had Arsenal down to finish outside the top four but with a striker in as good a form as Lacazette they must surely be doubting themselves. Lacazette is the striker that Arsenal have needed for years.