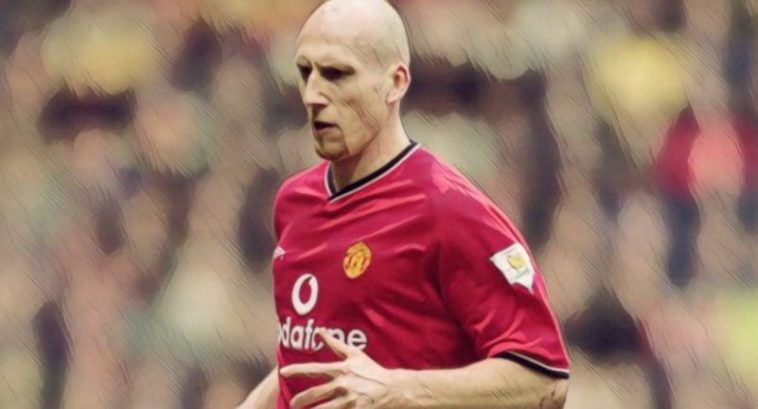 Our latest nostalgic trip through the Premier League archives takes us the 2000/01 season, a campaign which saw Manchester United continue their dominance of English football by winning a third consecutive top-flight title.

Elsewhere, newly-promoted Ipswich Town proved the surprise package of the season in finishing fifth and securing UEFA Cup qualification, whilst Leeds make their impression on Europe by reaching the semi-finals of the Champions League under David O’Leary.

We’re continuing our look back at the stars of each Premier League campaign, here is the PFA Team of the Year for the 2000/01 season:

Manchester United’s succession plan following the departure of Peter Schmeichel had failed to prove successful with the hapless Mark Bosnich and Massimo Taibi failing to grasp their opportunity, but Sir Alex Ferguson looked to have solved the club’s goalkeeping woes with the capture of Fabien Barthez from Monaco.

The Frenchman had won the Champions League and World Cup amongst his honours, and arrived in the Premier League having just helped France to further success at the 2000 European Championships.

Barthez began in fine form and instantly endeared himself to the Old Trafford crowd with his eccentric style, often taunting opposition forwards and producing a series of stunning saves. The goalkeeper played his part as United finished 10 points clear of runners-up Arsenal – becoming just the fourth club in English football history to win three titles in succession.

Stephen Carr was a dependable servant for several seasons at Tottenham and twice earned inclusion in the PFA Team of the Year during his time with the north London side, on each occasion being the only representative from a team outside of the Premier League’s top three.

The former Republic of Ireland international’s first nomination came during the 2000/01 season, where he was rewarded for his tenacious and consistent displays despite featuring for a Spurs side which slumped to a 12th-placed finish.

Carr’s season saw him make 33 appearances in all competitions and score three goals – the joint-best haul of his career.

Sir Alex Ferguson regards allowing Jaap Stam to leave Manchester United amongst his biggest managerial mistakes, and it’s easy to see why following the performances of the Dutch defender during his three-year spell in English football.

Stam was an intimidating presence at centre-back, a powerful defender with lightning pace and a cornerstone of United’s three successive Premier League titles.

The former Netherlands international was arguably the best centre-back in world football at his peak and player whose spell in the Premier League proved all too brief before he headed to Lazio in acrimonious circumstances at the end of the 2000/01 campaign.

It’s an all-Manchester United pairing at centre-back with Wes Brown voted alongside Stam by his fellow professionals, the defender recovering from a serious injury which ruled him out of the entirety of the previous campaign to enjoy the best season of his career to date.

Sir Alex Ferguson declared Brown as his side’s ‘most talented defender’ following an impressive season that saw the youngster form part of the division’s best defence, the academy graduate thriving at the heart of the backline to earn inclusion in the Team of the Year and a nomination for the PFA Young Player of the Year award.

Sylvinho became the first Brazilian ever to play for Arsenal after arriving from Corinthians in 1999, though his spell would prove brief as he spent just two seasons in the colours of the north London side.

The marauding full-back was signed as a long-term replacement for Nigel Winterburn and wasted little time in making an impact, establishing himself as a fixture in the side and enjoying an impressive 2000/01 season – one which included a stunning late equaliser at London rivals Chelsea.

The left-back was voted as the finest in the Premier League at the end of the season, but moved on following the emergence of a young Ashley Cole and reported issues with his passport.

No player has been included in the PFA Team of the Year on more occasions in the Premier League era than Steven Gerrard, who earned the first of his nominations following a season which saw Liverpool win a treble of trophies under the management of Gerard Houllier.

The midfielder enjoyed a breakthrough campaign and formed part of a young core of British talent in Houllier’s side, starring alongside the likes of Michael Owen, Jamie Carragher and Emile Heskey as the Reds lifted the FA Cup, League Cup and UEFA Cup in a memorable campaign.

Gerrard scored ten goals in all competitions, including a stunning strike from distance against Manchester United and a goal in the thrilling UEFA Cup final victory over Alaves in Dortmund, his performances recognised with the PFA Young Player of the Year award and inclusion in the division’s best XI.

Keane had been named as the Premier League’s finest player the previous season and was in similarly impressive form for Manchester United throughout the 2000/01 season, captaining the side to title success to earn the second of three consecutive inclusions in the PFA Team of the Year.

The Cork-native made 44 appearances in all competitions and scored three goals, including netting in an iconic 6-1 thrashing of title rivals and eventual runners-up Arsenal at Old Trafford.

The midfielder was once again the beating heart for Sir Alex Ferguson’s side as the claimed the title in record-breaking fashion, clinching the championship with an entertaining 4-2 victory over Coventry on April 14 – the earliest date any side has ever been crowned as Premier League champions.

Patrick Vieira’s domineering midfield presence had seen the Arsenal star establish himself amongst the most influential players in English football during the late nineties and early 2000s, with the Frenchman’s all-action displays once again recognised by his fellow professionals.

Vieira’s status grew following the departures of key figures in Marc Overmars and Emmanuel Petit, the box-to-box star driving Arsene Wenger’s side forward as runners-up in both the Premier League and FA Cup.

He scored six league goals in 30 appearances – the joint-best goalscoring season of his Arsenal career – to earn the third of a record six straight inclusions in the Team of the Year, a feat only matched by Alan Shearer and Steven Gerrard in the history of the division.

An integral part of Manchester United’s all-conquering side, Giggs was named amongst the Premier League’s finest for the third time in his career during a 2000/01 season that delivered yet more silverware success to Old Trafford.

Thierry Henry overcame a difficult start to enjoy a hugely impressive debut season at Arsenal the previous year, before enhancing his reputation as one of the Premier League’s finest forwards by scoring 22 goals in all competitions during the 2000/01 campaign.

That haul saw Henry match his league tally from the previous season with 17, and ensured Arsenal secured Champions League qualification once more after finishing as runners-up to Manchester United.

Henry’s haul included a sensational winning goal against the eventual champions and a first ever Premier League hat-trick against Leicester, whilst his tally of nine assists was bettered by only Manchester United’s David Beckham and Newcastle’s Nolberto Solano.

15 of the best quotes on Arsenal legend Thierry Henry

Teddy Sheringham’s move to Manchester United from Tottenham had paid dividends with the forward winning a host of major silverware – including a historic treble – during a four-year spell at Old Trafford, his evergreen talents adding to a deadly attacking contingent containing the likes of Andy Cole, Dwight Yorke and Ole Gunnar Solskjaer.

The final season of his time with the club delivered a vintage campaign for the veteran forward, finishing as the club’s leading goalscorer during their title-winning campaign to claim the PFA Player of the Year and FWA Footballer of the Year awards.

Sheringham scored 21 goals in all competitions as United once again dominated domestically, a perfect farewell for the star who returned to Spurs at the end of the season following the arrival of Ruud van Nistelrooy from PSV Eindhoven.