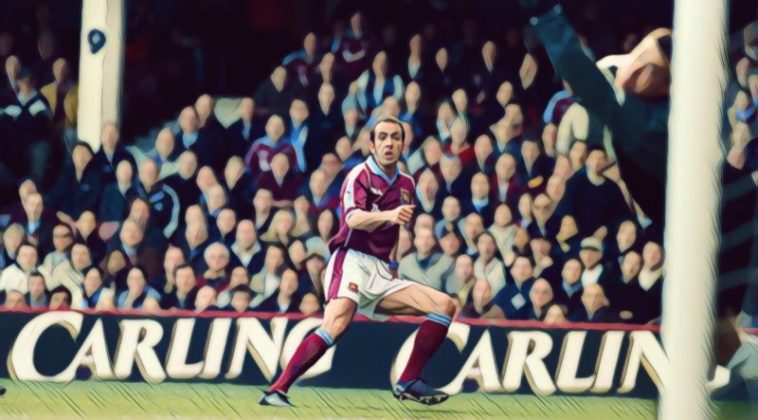 With a lack of football at present amid the current global pandemic, what better time to rewind through the archives and look at some of the game’s greatest moments from yesteryear.

Our latest offering revisits a decade of continued change within English football, the noughties ushering in a new millennium and seeing the arrival of billionaire investors that would forever alter the dynamics of the Premier League.

This feature takes us through a collection of glorious goals from a memorable decade, here is every Goal of the Season winner from the noughties:

One of the Premier League’s most iconic goals scored by one of its most colourful characters, Di Canio’s effort against Wimbledon is one that remains vividly in the mind of English football fans.

The Italian forward became a firm fans’ favourite during a four-year spell at Upton Park, his palpable passion and ability to produce magical moments endearing him to the East End faithful.

No moment, however, captured Di Canio quite like this goal against Wimbledon in March 2000.

Drifting into the far side of the penalty area, Di Canio awaits a long diagonal cross from Trevor Sinclair before executing a perfect scissor-kick volley which flew past Neil Sullivan into the far corner.

Di Canio will always be associated with his goal against Wimbledon, one which remains unique over two decades later and is arguably the best the league has seen.

Another sublime volley secured the second Goal of the Season accolade for the noughties, Charlton’s Shaun Bartlett winning the award for this stunning effort against Leicester at The Valley.

The South African watches the ball travel half the length of the field – including the added difficulty of coming over his shoulder – before unleashing a rifled left-foot volley into the far bottom corner.

Bartlett was far from a prolific goalscorer during his six seasons in the Premier League, but this display of flawless timing and technique ensured he will forever be remembered by the Charlton supporters.

There are volleys – and then there are *these* volleys ?

Some players – such as the aforementioned Di Canio – will always be remembered for one special goal, but even in a career of magical moments, the name of Dennis Bergkamp is perhaps most synonymous for this genius effort against Newcastle.

Arsenal headed to St James’ Park with both sides holding aspirations of winning the title, only for a piece of Bergkamp brilliance to break the deadlock and set the Gunners on their way to a precious three points.

Receiving a pass from Robert Pires with his back to goal, the Dutchman manipulated the spin of the ball with one touch, turning in the opposite direction past the bewildered Nikos Dabizas before collecting it on the other side of the Greek defender and rolling the ball home.

It was a breathtaking moment of attacking instinct and innovative skill, a goal which set Arsenal on their way to a domestic double and is yet to be recreated in the years since.

A goal on this feature that seems to have it all in terms of quality and setting, a stunning solo effort in the hostility of a north London derby.

The gap between Arsenal and Tottenham may have been a little larger in the early noughties, but that makes Henry’s sensational individual effort no less special.

Picking the ball up deep inside his own half, Henry surged towards the Spurs goal, holding off the challenge of Matthew Etherington. The Frenchman’s blistering pace was evident as he charged into enemy territory, with the visitors defence continuing to back off.

Henry sidestepped a feeble challenge from Stephen Carr, before taking another touch to steady himself and fire low past Kasey Keller.

Having travelled almost the length of the pitch to score, Henry proceeded to set off on a pitch-length sprint in celebration finished with customary knee slide.

The former Germany international was an understated and perhaps underrated presence in the Liverpool midfield during seven seasons on Merseyside, a fine defensive midfielder who often provided the assurance for the club’s attacking talents.

Scoring goals – Hamann scored just eight in 191 league appearances – was not the player’s forte, but when he did trouble the scoresheet it tended to be in spectacular fashion.

None more so than a thumping effort against Portsmouth at Anfield in 2004, a volley of precision and power that set Gerard Houllier’s side on their way to a routine victory.

After the Portsmouth defence had failed to adequately clear Harry Kewell’s high corner, Michael Owen kept the ball alive on the byline before seeking a cross. Spotting the unmarked Hamann on the edge of the penalty area, Owen lofted a ball in the direction of the German with thunderous consequences.

Hamann met the ball first time on the volley, slicing across the ball to add swerve as it nestled into the top corner, becoming the first Liverpool player of the Premier League era to win the Goal of the Season award.

Wayne Rooney’s first season as a Manchester United player delivered plenty of memorable moments, including a stunning hat-trick on debut against Fenerbahce in the Champions League.

The talented teenager scored 17 goals in all competitions for Sir Alex Ferguson’s side, including two brilliant goals during an FA Cup victory over Middlesbrough in January 2005.

The first was a perfect chip from distance over the stranded Mark Schwarzer, before winning the Goal of the Season award with a thumping effort to secure a 3-0 victory.

Louis Saha flicked on a clearance from goalkeeper Roy Carroll into the path of the precocious youngster, who let fly with a dipping volley that flashed past Schwarzer and sealed United’s place in the next round.

Cometh the hour, cometh the man and rarely has a player delivered on the biggest occasions more than former Liverpool captain Steven Gerrard.

The midfielder scored in four separate cup finals – including the Champions League – throughout his career, but never in more timely or spectacular fashion than his FA Cup final equaliser against West Ham in 2006.

Liverpool were heading towards a cup final upset following an enthralling topsy-turvy encounter with the Hammers in Cardiff, trailing by two goals before efforts from Djibril Cisse and Gerrard brought Rafael Benitez’s side level.

Paul Konchesky’s fortuitous cross-shot put West Ham back in front, and as time ticked away hope looked lost. As the four minutes stoppage-time was announced to the Millennium Stadium, a headed clearance dropped towards a fatigued Gerrard who had been stricken with cramp just moments earlier.

What resulted was the sweetest strike of football from the Liverpool legend’s right boot, Gerrard hitting an unstoppable effort past the despairing Shaka Hislop to force extra-time. Liverpool later emerged victorious following a penalty shoot-out, the final forever immortalised as ‘The Gerrard Final’.

Beauty, of course, is in the eye of the beholder and great goals are no different.

Whilst some prefer unstoppable efforts from distance or solo runs, others prefer the ruthless nature of a rapid counter-attack, with few more memorable than Wayne Rooney’s effort for Manchester United in 2007.

After a long throw into the United penalty lands at the feet of Cristiano Ronaldo, the Portuguese plays a one-two with Rooney deep inside their own half. After receiving Rooney’s clever flick, Ronaldo surges forward into the opposition half, before once again finding his teammate free.

It was a goal that symbolised an era in which a young Rooney and Ronaldo terrorised Premier League defences, the former finishing the quick-fire move off with a superb chip over the advancing Jussi Jääskeläinen, with the ball hitting the net just seconds after Bolton had threatened at the opposite end.

Emmanuel Adebayor may be a named despised by Arsenal fans following his antics since leaving the club, but the forward enjoyed arguably the best spell of his career in north London including a brilliant 2007/08 season that saw him finish second in the race for the Premier League’s Golden Boot.

Amongst his 24 league goals that season came a fabulous flick and volley in the north London derby at Tottenham, smashing the ball past Paul Robinson to claim the Goal of the Season award.

The Togo international’s goal was part of a brace as Arsenal came from behind to win at White Hart Lane, securing a 3-1 victory at the home of their bitter city rivals.

Having emerged as a promising teenager at West Ham before struggling to make an impression at Chelsea, Johnson flourished during a three-year spell on the South Coast with Portsmouth to establish himself as a fixture in the senior England side.

The right-back’s overriding qualities were always in an attacking sense, but even the most optimistic of Pompey fans must have been questioning the defender’s logic in winding up a 30-yard volley on his weaker side against Hull in November 2008.

What resulted was one of the finest Premier League goals witnessed at Fratton Park – and at any ground for that matter – Johnson taking a clearance on his chest before launching a sublime dipping volley into the far top corner.

The goal wasn’t quite enough to secure three points for Tony Adams’ side, but did land Johnson the BBC Goal of the Season award, the first – and so far only – Portsmouth player to win the accolade.

Read – Remembering every PFA Player of the Year from the Noughties