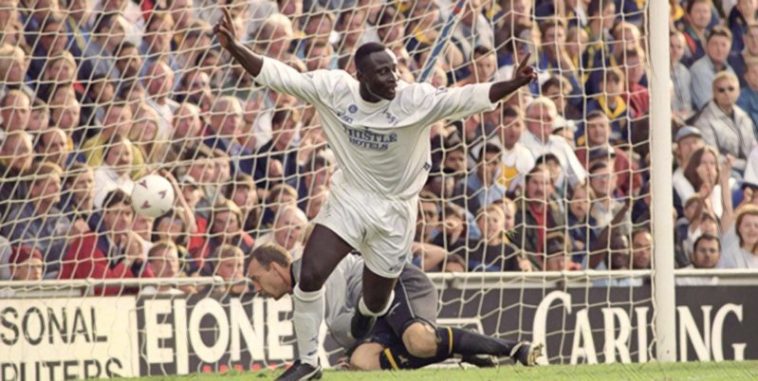 With a lack of football at present amid the current global pandemic, what better time to rewind through the archives and look at some of the game’s greatest moments from yesteryear.

We’ve decided to revisit a decade that would change the landscape of football forever, the nineties seeing the introduction of the Premier League and with it the creation of world football’s biggest domestic league.

This feature takes us through a collection of glorious goals from the early seasons of the newly-formed division and FA Cup, here is every Goal of the Season winner from the nineties:

The winner of the Goal of the Season award during the Premier League’s inaugural season was Dalian Atkinson, a player who possessed sublime talent but perhaps failed to truly fulfil his true potential during spells at the likes of Ipswich, Real Sociedad and Aston Villa.

At his best, however, Atkinson was a formidable opponent and his goal against Wimbledon in the early nineties captured the forward at his rampaging best, picking the ball up deep inside the Villa half before embarking on an incredible solo effort.

His driving run saw him turn away from one player before surging past two further Wimbledon challenges, his pace and power evident in addition to flawless close control. Approaching the edge of the penalty area he still had it all to do, but after pausing momentarily, executed a delightful chipped finish over the helpless Hans Seger.

Atkinson spent four years with Villa before leaving for Fenerbahce, the forward tragically losing his life in 2016 after an incident in which he was tasered by police, aged just 48.

Wallace helped Leeds to the league title in the season prior to the formation of the Premier League, eventually spending seven years with the club and being a key part of the side during the early seasons of the rebranded division.

An exciting attacking talent, Wallace won the Goal of the Season award for the 1993/94 season, courtesy of a wonderful individual effort against Tottenham at Elland Road.

The forward evades three challenges during a mazy dribble from the left-hand side, driving forwards from inside his own half before curling an unstoppable effort into the far corner.

Wallace’s brother, Danny, had won the Goal of the Season award whilst playing for Southampton 10 seasons earlier and Rod’s solo goal saw the duo become the first – and so far only – brothers to win the award.

Few players in Premier League history possess a goal collection quite like Southampton great Le Tissier, the maverick forward a regular contender for the Goal of the Season awards with his penchant for the spectacular.

‘Le Tiss’ would claim the honour during the 1994/95 season – a campaign in which he twice won Goal of the Month – with a stunning effort from distance against Blackburn at Ewood Park.

Picking the ball up just inside the Rovers half, Le Tissier jinked away from a couple of challenges in trademark style before executing a powerful dipping effort past the despairing Tim Flowers.

The goal mattered little to eventual champions Blackburn, however, Le Tissier’s stunner in vain as Rovers secured a 3-2 victory on their way to the Premier League title.

The name Tony Yeboah will forever be remembered amongst Premier League supporters courtesy of a memorable two-year spell at Leeds, a period which saw the Ghanaian score two of the greatest goals in the division’s history.

Yeboah became the first player in history to win consecutive Goal of the Month awards during the 1995/96 season for efforts against Liverpool and Wimbledon, the latter being announced as the finest of the Premier League season.

Taking a headed clearance on his chest, the forward juggled the ball forward before feinting past some rather hopeless defending. Whilst Wimbledon’s defensive play may have lacked quality, the execution of Yeboah’s finish certainly did not – hitting a thunderous effort that flew in off the underside of the crossbar.

Tony Yeboah – king of the thunderbastard.

There’s something ever so aesthetically pleasing about an overhead kick, and Trevor Sinclair’s for QPR against Barnsley is one of the most perfectly executed efforts English football has seen.

The 1996/97 Goal of the Season was awarded to Sinclair following his brilliant acrobat effort at Loftus Road, an incredible display of technique during an FA Cup fourth round meeting between the London side and their second tier rivals.

David Bardsley’s cross seemed to pose little danger until Sinclair improvised with spectacular effect, a brilliant display of athleticism and audacity to score one of the most memorable FA Cup goals of all-time.

Barnsley would prove to have the last laugh, however, earning promotion to the Premier League, whilst Stewart Houston’s QPR fell short in their bid to reach the play-offs.

After the previous campaign’s Goal of the Season was awarded in a cup competition, it was time for the Premier League to take centre stage once more as Dennis Bergkamp claimed the first of his two career awards in 1997/98.

That campaign saw the true birth of Arsene Wenger’s Arsenal as the north London side secured a domestic double, Bergkamp the undoubted star of the show to be named as the PFA Player of the Year and FWA Footballer of the Year.

Amongst the Dutchman’s highlights was a breathtaking hat-trick in a thrilling 3-3 draw at Leicester – widely recognised as the greatest treble in the division’s history – the third of which was named as the best goal of the Premier League season.

The goal was simply Bergkamp at his very best, cushioning a diagonal ball from David Platt with effortless brilliance on his right foot, flicking the ball past the wrong-footed Matt Elliott with his left, before steadying himself to fire past Kasey Keller in goal.

Bergkamp finished in first, second and third for August’s Goal of the Month competition in 1997, the only time in history that one player has achieved the feat.

Denis Bergkamp: 15 of the best quotes about the Dutch master

The final Goal of the Season accolade for the nineties was bestowed upon Ryan Giggs, the Welsh winger’s sensational slaloming effort against Arsenal immortalised in FA Cup history forevermore.

Sir Alex Ferguson’s Manchester United and Arsene Wenger’s Arsenal were in the early years of an iconic rivalry for English football’s biggest prizes, the former looking to wrestle back the ascendancy after the Gunners had claimed a domestic double the previous season.

Embroiled once more in a tight title race, the two sides also met in the semi-finals of the FA Cup and played out a classic encounter at Villa Park, David Beckham opening the scoring with a fine effort from distance before Dennis Bergkamp’s deflected equaliser.

A topsy-turvy encounter saw Roy Keane later sent off and Peter Schmeichel deny Bergkamp from the penalty spot in extra-time, before Giggs produced a moment of magic to send United through.

Pouncing on a wayward pass from Patrick Vieira inside his own half, Giggs embarked on an incredible solo run into Arsenal territory, skipping past a succession of challenges before firing high past David Seamen.

An iconic goal was matched with an iconic celebration, Giggs exuberantly swinging his shirt over his head and allowing the world to set eyes upon what can only be described as a chest-rug.

United marched on to the Wembley final to beat Newcastle, adding the FA Cup to their Premier League and Champions League triumphs in a historic treble-winning season for the club.