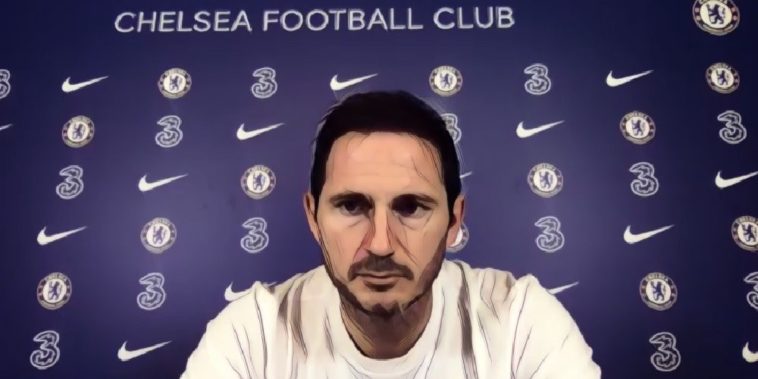 Frank Lampard has refused to discuss talk linking Chelsea with a move for Kai Havertz as he focusses on steering his side into next seasons Champions League.

Having already secured the captures of Hakim Ziyech and Timo Werner ahead of next season, Chelsea are reportedly looking to continue their impressive recruitment drive with the capture of Havertz, the 21-year-old having scored 12 goals and provided six assists in his 30 Bundesliga appearances this season.

Chelsea are said to be in talks over a potential £80 million move for the Germany international, the west London club potentially able to outspend their rivals thanks to their transfer restrictions of last summer, combined with the sale of Eden Hazard to Real Madrid.

However, Lampard unsurprisingly refused to discuss his apparent interest in the Bayer Leverkusen playmaker, focussing on Wednesday night’s clash against Premier League champions Liverpool at Anfield.

“I’m not talking about Kai Havertz,” the former midfielder said at his pre-match press conference. “I’ve said before, he’s a player of another team.

“Looking at the game tomorrow, which is so huge for this club, the last thing I want to do is talk about players for other teams.”

Chelsea currently sit third in the table, a point ahead of both Leicester and Manchester United, with a game in hand over the Foxes, as all three teams fight for just two Champions League places in this final week of the season.

The Blues have also reached next month’s FA Cup final following their 3-1 win over Man Utd at the weekend, though Lampard insists that this season’s achievements are not an indication that his side are ready to challenge for the title next season.

“It’s the competition in front of you,” he said. “It’s the one where you have to produce the most consistency, it’s a gauge of where you are as a club and the prestige of wanting to stay in the Champions League.

“We have done it a lot over the years at Chelsea. This year I think it was probably the most testing time to be in there, and if we are, I will be happy.

“Does it mean we will challenge for the league next year? No. It means we have made a step, if we get there.”

Chelsea require just three points to confirm their place in next season’s Champions League, their final game of the season a home tie against Europa League hopefuls Wolves.