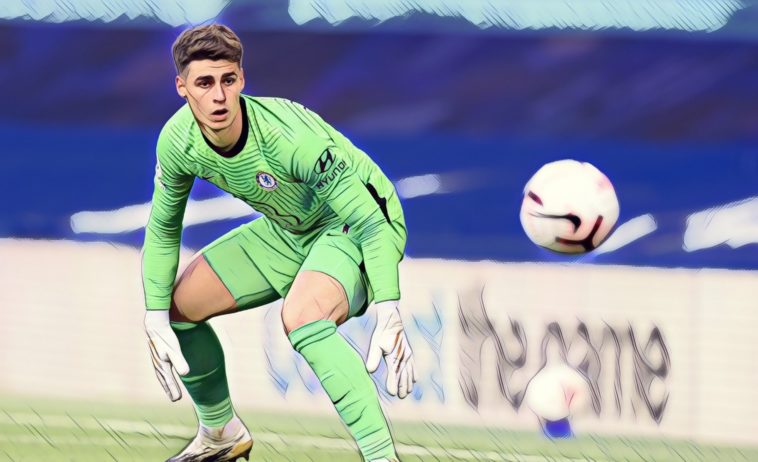 2020, by every metric and by every definition, was an atrocious year.

A global pandemic brought the world to its knees, while in the UK the promise of Brexit lingered in the background like a stale gammony trump. Speaking of Trump, he took us to the brink of WWIII back in January, killing some high-level Iranian dude. 2020 even took Diego Maradona from us.

So, with a new year thankfully upon us maybe it’s best that we forego the usual tradition of compiling a team of the year or throwing a virtual garland around a special player. There is little to celebrate here besides the fact that we got through it all.

Instead – fittingly – let’s put together a team of eleven players who truly stunk up the place these past twelve months. This lot would lose to Sheffield United right now. Collectively they sum up 2020 to a tee.

All the way back in January a damning statistic revealed that the Spanish international had the worst save percentage in the Premier League. Incredibly, he was 127th out of 132 from Europe’s top seven leagues.

This was a problem for a player representing a top six club who cost an eye-watering £71.6m, a world record for his position. The occasional rick could be overlooked but not being able to properly perform a basic requirement of his job?

The 26-year-old’s fate was compounded this season when a series of howlers necessitated Chelsea to seek out a replacement.

Incidentally, Jordan Pickford deserves an honourable mention at this point. Like Kepa, the Everton mad-head can always be relied on to be unreliable.

There’s really not much to say about the former Liverpool loanee beyond that he is persistently and consistently a little bit rubbish.

Like several others in this line-up it’s actually genuinely impressive that he has carved out a career in the top-flight given that he is Championship level at best and with Newcastle’s summer signing Jamal Lewis also having a rotten 2020 the Magpies can lay claim to having the worst full-back pairing around.

It’s not a trophy but at least that’s something, right?

The chunky defender was never going to be a favourite of Mikel Arteta because in chess terms he is a rook, capable of only moving forwards or sideways. In his preferred left-back role that makes him predictable.

So it was that Kolasinac was drafted in as an emergency centre-back post-lockdown and arguably injuries to team-mates has extended his stay at the Emirates. Even so, the Bosnian failed to grab the opportunities with both hands and realistically his only chance of remaining at Arsenal is if his manager leaves before he does.

On paper at least the recruitment of the 36-year-old Serb on a twelve-month deal made sense for the Baggies.

Versatile across the back, vastly experienced and with three Premier League titles in his cabinet to boot, Ivanovic was a shrewd addition to the squad as Slaven Bilic’s men adapted to life back in the top flight.

The problem arrived when Bilic – concerned at his side shipping in ten goals from their opening three fixtures – began to play him and worse yet, play him regularly.

Seeing the aging defender compete with the best strikers around brings to mind an oil tanker racing a speedboat and in hindsight we can say that having Ivanovic on the periphery would have been a plus: putting him front and centre makes him a liability.

Ivanovic coming on for the final 4 mins. I love Big Sam😭

It took a good while for people to realise that Chelsea’s defensive problems didn’t begin and end with Kepa. Their hapless Dane is also a major contributing factor. We could highlight his many flaws and damn his woeful decision making but why do that when the stats speak so plainly.

This season Christensen has played 405 minutes in the league. It would have been 450 minutes but he was sent off against Liverpool, his dismissal proving costly.

While on the pitch his side have conceded a goal every 40 minutes. Without him, Chelsea have kept opponents out on average every 135 minutes.

Just five months in as a Newcastle United player and the Irish midfielder is already proving himself to be a great big flop in the North-East. “He’s actually so bad, it’s not even funny,” claimed one well-established blog. “Jeff Hendrick gets a lot of grief but to be fair, Jimi Hendrix would struggle to hit the right notes under this manager,” was a more sympathetic take on Twitter.

Hendrick’s inability to make even the slightest impact on games will come as precisely no surprise to Burnley fans who saw the player’s form plummet last season before giving up the ghost completely.
Even arriving as a free transfer it could be said that Mike Ashley was robbed.

The Icelandic international had a stormer against Chelsea recently, heavily involved throughout and instrumental in gaining his side three precious points, yet Evertonians will know not to get carried away.

That’s because ever since the attacking midfielder joined the Toffees from Swansea in 2017 for a club record £40m this is what he does: occasionally reminding everyone of what he’s capable of before sliding back into prolonged periods of anonymity and mediocrity.

This was Sigurdsson’s make or break year after a hugely disappointing spell on Merseyside. With just two goals and three assists last term and a further slew of underwhelming displays this time out, if anything he is going backwards.

⚽️ Gylfi Sigurdsson has scored his first away PL goal since Feb 2019, ending a run of 29 away PL apps without scoring since his brace in a 3-0 win at Cardiff pic.twitter.com/YHb4lbkfAl

As recently as December 2019, Bernardo Silva was being seriously talked about as a Ballon d’Or contender, such was his significant impact on a Manchester City side that has accrued 198 points across two seasons and a Nations League-winning Portugal.

Blessed with impish feet and a bewitching range of tricks the ex-Monaco ace also put the graft in, harrying and hustling like an energetic box-to-box midfielder of old. It really was like having two players rolled into one.

3 points against a very tough side 🔵🔵 pic.twitter.com/U43gHBFK2f

Mystifyingly both of those players have disappeared in 2020, leaving an ineffective shell in their place. Passes have gone astray too often. The mileage has dropped. Where once he was everywhere now it’s possible to forget he’s even playing.

A good many players put in worse performances than Bernardo Silva this year. But very few compare so poorly to their former selves.

Best of 2020: Seven incredible non-football moments from the Premier League this year

When Pepe joined the Gunners for an exorbitant £72m it was inevitable that comparisons with Thierry Henry would follow. Both had explosive pace and tricks to spare. Both tore up Ligue 1 in their early twenties. The Arsenal connection cemented their similarities.

That, however, is where any likeness ends.

I think it's quite telling that 18 months after signing for Arsenal Nicolas Pepe still hasn't cemented a first team place.

Just prior to Christmas, Mikel Arteta revealed that he planned to counsel his young winger after a terrible run of form had resulted in him sliding down the pecking order behind frankly better talents in Gabriel Martinelli and Bukayo Saka.

If Pepe’s first troublesome campaign could be excused as he found his feet, this season has sadly revealed both of them are left.

A lesson we all learn in life is never to settle for second-best. Because second-best is not – as the term implies – the next best thing. Often it’s a really bad alternative.

This is what Everton have discovered to their great cost after missing out on signing Wilfried Zaha from Crystal Palace in the summer of 2019 and instead turning their attentions on Alex Iwobi from Arsenal, splashing out a ludicrous £34m in the process.

So abject and impotent has the Nigerian been at Goodison Park that it’s tempting to believe the transfer was a very expensive and elaborate prank.

How’s Your Christmas ?
Hope You’re Having A Cracker
🥁😉 pic.twitter.com/WZlxKbv5rg

Common consensus has it that if the Seagulls had a reliable finisher they would worry the top ten. Alas, they do not.

Last term only Neal Maupay reached double figures and though they have collectively become more clinical of late the distinct lack of goal-threat posed by Aaron Connolly continues to undermine their efforts.

Aaron Connolly (‘00) wins his third penalty in the Premier League – the most of any Brighton player under Graham Potter.

Since breaking into the side early into the 2019/20 season the likeable Irishman has notched a goal every 449 minutes and that ratio is only showing signs of worsening, not improving.

Rumours that opposing goalkeepers actually cheer when his name is included in the team-sheet remain unconfirmed.

Read: Required Reading – Five of the best football books of 2020

See Also: Best of 2020: Five of the greatest goals from the past year of club football