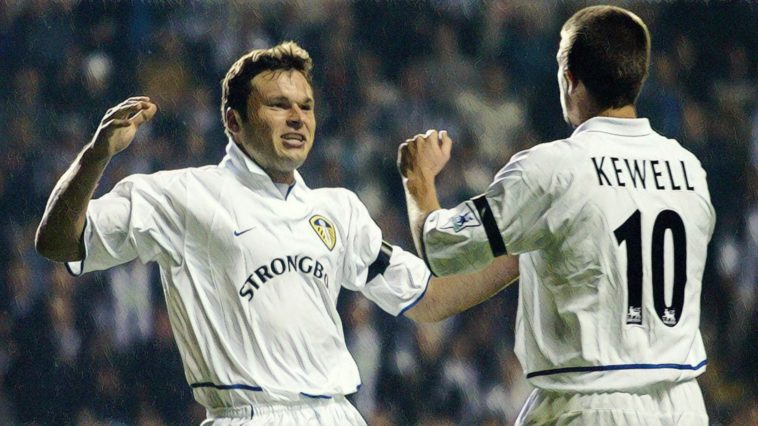 With Leeds firmly back in the big time following a 16-year absence from the Premier League, Marcelo Bielsa has awoken one of English football’s sleeping giants.

The club’s promotion to the top flight as Championship winners in 2020 ended a long, agonising wait for the Yorkshire side’s supporters, who will hope their return is the start of a rise back towards England’s elite.

Leeds United were amongst the finest sides in the division at the turn of the century with a host of leading names starring at Elland Road, and we’ve decided to look back at the club’s greatest goalscorers from the Premier League era.

Here are the rankings of Leeds’ top five goalscorers in Premier League history:

The hometown hero who became a firm fans favourite before a controversial exit, Smith burst onto the scene at Elland Road as a teenager after coming through the club’s academy ranks.

Smith’s robust style instantly endeared him to the Leeds support, the crowd enamoured with the ‘local lad made’ good whose committed displays symbolised the ‘everyone hates us, we don’t care’ mentality for which the club have become famed.

Smith – for all his tenacity and willingness to upset opposition defenders – was more than just a nuisance in attack, however; he was a fine finisher with great awareness and flawless first touch.

The forward formed a fine partnership with Mark Viduka during Leeds’ run to the semi-finals of the Champions League in 2000/01 and finished that season with 18 goals in all competitions, his 11 league strikes part of a tally of 38 scored for Leeds before his controversial departure.

Smith stayed until the very end, his exit following the club’s financial meltdown and relegation. He left for bitter rivals Manchester United in 2004 – after claiming he would never play for the club.

Another player brimming with youthful enthusiasm in an exciting Leeds side at the turn of the millennium, Bowyer established himself as one of the Premier League’s best goalscoring midfielders during a productive seven season spell at Elland Road.

Bowyer signed for the club as a teenager from Charlton before becoming a key figure under the management of David O’Leary, helping the Whites to memorable runs in European competition as Leeds became regulars in continental competition.

The midfielder became a firm fans’ favourite despite a series of off-field problems throughout his career, twice being named as Leeds’ Player of the Season and scoring 38 Premier League goals for the club.

Bielsa’s Apostles: 12 players whose careers have been hugely influenced by the Leeds United manager

A member of the side that were crowned champions of England in the final pre-Premier League season, Rod Wallace was an important player for during the first few seasons of the newly branded division, an exciting forward talent capable of exceptional pieces of brilliance.

The diminutive star possessed electric pace and was a live wire in attack, comfortable playing centrally or on the flanks and a scorer of some brilliant individual efforts – including a Goal of the Season winner during the 1993/94 campaign.

Wallace, however, failed to deliver consistently during an era of mediocrity under Howard Wilkinson before becoming an experienced fixture under the guidance of George Graham and later David O’Leary, his seven seasons delivering 42 Premier League goals.

Harry Kewell is amongst a group of players whose career burned brightly during its initial stages before faltering in his latter years, but for a time at Leeds the winger looked capable of becoming one of world football’s finest.

Kewell joined the Yorkshire side as a teenager and won the FA Youth Cup before making a first-team impression, the Australian emerging as the most exciting talent amid David O’Leary’s crop of precocious players.

The talented forward established himself as one of the stars of the Premier League and won the PFA Young Player of the Year award in 2000, his elegant style and ability to produce something out of nothing marking him out as a firm fans’ favourite at Elland Road.

Kewell was the poster-boy of an emerging Leeds side and tore opposition defences apart in tandem with compatriot Mark Viduka, scoring 45 league goals for the club before signing for Liverpool in 2003.

His latter career was sadly decimated by injuries despite flashes of his natural ability, Kewell regarded by many as the most talented player Australian football has produced.

Leeds’ leading goalscorer in the Premier League and an underrated presence amongst forwards from the noughties, Viduka arrived in English football following a goal-laden spell at Celtic that saw the Australian named as the PFA Scotland Player of the Year.

The burly forward wasted little time in making an impact south of the border, scoring 22 goals in all competitions during an impressive debut season at Elland Road, including a four-goal haul in a thrilling 4-3 victory over Liverpool.

Mark Viduka was prolific for @LUFC during the 2002/ 03 season…#PLMoments pic.twitter.com/gZkhtAg3sq

Viduka spent four seasons at the club and reached double figures for goals in each campaign, his finest individual season seeing the forward net 20 league goals to save Leeds from relegation in 2002/03.

The forward thrived as the focal point of the Leeds attack, the ‘good touch for a big man’ cliché perhaps never more fitting than for Viduka – a player whose sublime technique laughed at preconceptions of powerfully built strikers.