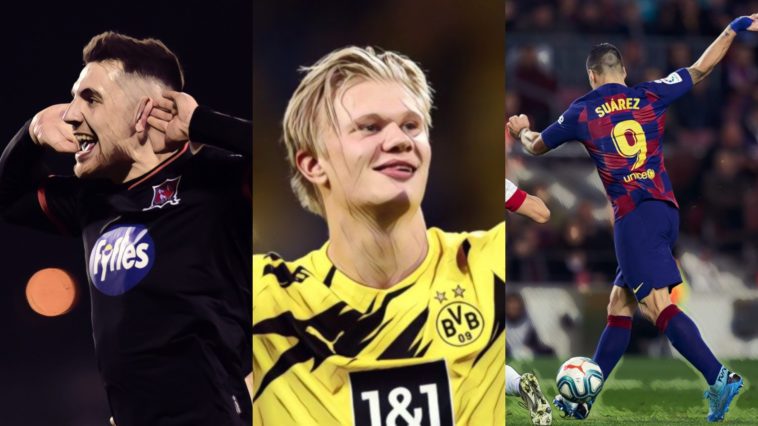 It’s been a weird year of football, but one thing we could still enjoy were some pure, unadulterated golazos. Well, unless VAR got in the way, of course.

2020 saw some spectacular goals, ranging from bullet strikes to finesse finishes. We’ve done our best to find some of the very finest from outside of the Premier League that deserve recognition.

Whittling it down to just five goals was not a straightforward task, but this list is by no means definitive. What one lover of football considers a great goal may not be so by another. The only criteria we’ve applied is that the goals included have to be worthy of rewatching over and over and over again.

Erling Braut Haaland exploded onto the scene with Salzburg in the group stages of last season’s Champions League, but he reached a whole new level of stardom with his performances with Borussia Dortmund after joining the German Bundesliga club in January.

BVB came up against PSG in the knockouts, where the Norwegian prodigy scored a sensational goal from range to put his new team in the driving seat in the first leg.

The club couldn’t get the job done in the return leg, but Haaland proved he belonged at the top echelons of the game with his performance that night.

Some spectacular goals have come from the feet of Luis Suarez, but when his career is over and his greatest moments are compiled for posterity, his back heel flick to scored against Mallorca might become his defining goal.

📽️ The highlights you've been waiting for…

Messi scored a hat-trick and @LuisSuarez9 a ridiculous backheel (0:57) in a memorable @FCBarcelona win! 💙❤️#BarçaRCDMallorca pic.twitter.com/CH7mH5lVuj

The audacity alone to try this is just outrageous. And yes, it should have won the Puskas Award this year.

A specialist at long range strikes, Ruben Neves hit his sweetest in the Europa League meeting with Espanyol last season. Controlling a high ball with his chest, the Portuguese midfielder put his foot through the ball to send it flying past the helpless goalkeeper.

Few goals in the past year have been as astonishing and remarkable as Jordan Flores’ volley for Dundalk during their 3-2 defeat at Shamrock Rovers. Meeting a corner that is whipped in at considerable speed, the Wigan native somehow angles his leg to hit the ball while it’s still around five feet in the air. It looks like something out of Shaolin Soccer.

It was the highlight of an entertaining contest and, while Dundalk could only come third in the league this year, they did reach the group stages of the Europa League, where Flores also bagged a rocket against Molde and another cracking strike against Arsenal.

It was ‘only’ Tranmere on a muddy pitch in the fourth round of the FA Cup, but there is still something mesmerising about Harry Maguire’s goal for Manchester United on that January day.

Perhaps it’s the fact you wouldn’t expect such a strike from a player such as himself. Maybe it’s the Cantona-esque nonchalance of the celebration after he’s scored the best goal of his career. Whatever it is, it’s a bloody great goal.

Read: Turkish Delight: Five of the best Turks to ever play in the Premier League