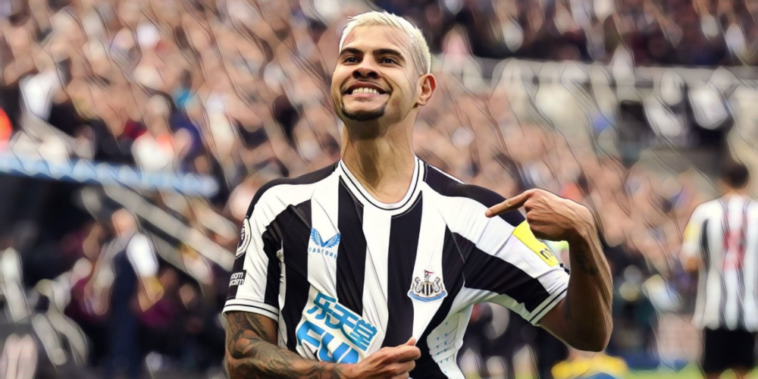 “Newcastle is a project, not just for one or two seasons. I think they are here to stay.”

So said Pep Guardiola when recently asked about the Magpies’ almost inevitable ascendancy to the upper echelons of English football following their takeover last year by Saudi Arabia’s Public Investment Fund (PIF). At the time the takeover was accompanied by an avalanche of press coverage, all approaching this sensational development from various angles. The end of Mike Ashley’s unpopular tenure was celebrated in print. Concerns over Saudi Arabia’s atrocious human rights record were aired. From a footballing perspective, PIF’s ginormous net worth was the headline news. With an estimated fortune of £320 billion it – in effect – instantly made a club that last won a trophy in 1955, the wealthiest in the world.

There was of course a pertinence to Guardiola’s words, the Catalan presiding over the finished article of the last club that was furnished with ridiculous resources, and this too was an angle explored last autumn. The similarities between Manchester City in 2008 and Newcastle United today were highlighted. The acknowledgement of who City have become, and the fabulous team they possess, were parlayed to the sizable potential of the Magpies.

And initially at least, in those first mad few days following the official confirmation of the takeover, there were definite echoes of 2008, not least in the excitable imagining of which superstar may be purchased to make a strong opening statement to a watching world. In Newcastle’s case, this took the form of Kylian Mbappe, photoshopped repeatedly on Twitter wearing the famous black and white stripes. For City, back in the day, it was Kaka, discussed in hushed tones among their fanbase on Myspace.

A few days in, however, and a discrepancy became apparent and the difference between then and now was a substantial one at that.

Because when the Abu Dhabi United Group took control of City 14 years ago, Financial Fair Play was still a rumour of an idea in the pipeline. Granted, ADUG rightly took it seriously enough to accelerate their spending from the off, so as to get ahead of its curve, but at that stage the established elite of European football were merely worried about the competitive threat posed by foreign, ludicrously loaded owners, not outright terrified.

So it was that City, in those first few transfer windows, were free to spend as they wish, and boy did they take full advantage of that privilege. Star players from rival clubs were purchased. Household names were lured to East Manchester. The previous season’s Player of the Year winners were bought. It was a frenetic shopping spree that exclusively targeted the top shelf and quickly – some might say, inevitably – City’s greatly improved squad roster took the club from one level to the next, to the next.

Three years into their grand, expansive project, the Blues won their first trophy for 35 years while crucially securing a top-four placing in the Premier League. Twelve months later they won the league.

Compare and contrast that rapid rise to the financial restrictions placed upon Newcastle’s new owners last year, with FFP regulations an entrenched set of measures within football.

According to the most reliable reports, Newcastle have £200m to spend across their first four transfer windows – with a lot less to spend thereafter – and though that sounds like a fortune it’s not when you break it down, not really. Not when you consider the considerable, and extremely expensive elevation that ultimately is their goal: to go from relegation strugglers to top four inhabitants, challenging for major silverware.

Is it realistic therefore, or in any way feasible, that Newcastle could be expected to undertake such a quantum leap in stature with the addition of a singular player? A player surrounded by team-mates who have repeatedly demonstrated they are lower top-flight fare.

It would be akin to buying a gold-plated exhaust for a Ford Fiesta.

So instead, the new Newcastle powers-that-be opted for another way, focusing on a slow-build; concentrating on incrementally improving, one solid block at a time.

In their first window, Bruno Guimaraes was bought from Lyon. Already viewed as one of the best midfielders in the Premier League, and already having gained icon status among the St James’ Park faithful, the Brazilian was a star-in-the-making over an established superstar, with all the baggage that comes with the latter. Subsequently, he cost a bargain £38m.

That window too Chris Wood, Dan Burn, Kieren Tripper and Matt Target were drafted in, all with the intention of strengthening the squad, bringing in the quality and experience to ensure relegation was avoided.

Moving to the most recent window, Alexander Isak, Sven Botman and Nick Pope joined the North-East revolution, each identified as the right player to improve a key position. Each prompting a nod of approval from those who favour common sense over financial profligacy.

Revealingly, the club swerved on a long-term target Hugo Ekitike this summer when his agent’s demands encroached on £1m.

In the dugout meanwhile, PIF went with Eddie Howe to provide a steadying influence and implement logical management. Who else thought they would head-hunt a continental big-name, coming as much for the pay-check as the opportunity? Everybody, that’s who. Everybody thought that.

All told, it is a pragmatism that is far-removed from the spend first, think later mandate that many expected and more so, it is a strategy that is handsomely paying off.

To date, Howe’s side have lost only once this term, and that to a 98th minute winner at Anfield. They are handily positioned on the shoulder of giants in sixth and for each home game, St James’ Park is a cauldron of passion and noise, its residents feeling connected to a team that is showing togetherness and fight.

Admittedly, they are still short of one or two top-class players, but they will duly come in time. It is after all a slow-build. An incremental rise.

Pep was right, you know. Newcastle really are here to stay.