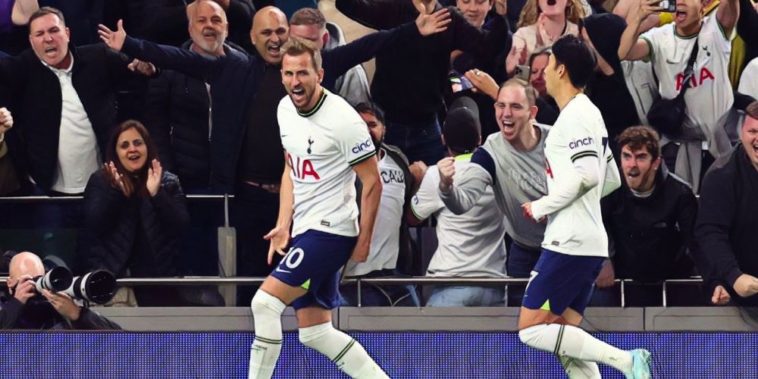 Tottenham Hotspur ran out 2-0 winners against Everton in North London to consolidate their position in third in the Premier League.

Tottenham dominated the possession during the first 45 minutes in north London, though it was Everton that fashioned the better of the first-half chances.

Former Evertonian Richarlison sent an early header over the bar from an Ivan Perisic delivery from the left, though on the whole, the Blues – who came into the game with the joint-best defence in the league – dealt with the hosts attacking threat well, before Demarai Gray and Amadou Onana both blazed over the bar from inside the box.

An injury to Richarlison early in the second half prompted Antonio Conte into a change of shape, bringing in Yves Bissouma to make a midfield three, and the decision seemed to give Spurs much more control in the middle of the park.

In the 57th minute, Spurs would be gift-wrapped an opportunity to take the lead, with Jordan Pickford spilling Matt Doherty’s initial effort before the Toffees ‘keeper brought down Harry Kane who had pounced onto the loose ball. The England captain stepped up against his international teammate to despatch a thunderous penalty.

Everton failed to muster a challenge to get back in the game – not having a single shot in the entire second half – and in the 86th minute, Spurs sealed the three points. Harry Kane received the ball and showed good patience to hold it before releasing it to find the overlapping run of Rodrigo Bentancur. The midfielder fired a cross all the way across the box to pick out Pierre-Emile Hojbjerg, before he took his time and slotted past Pickford.

Going under the radar because of Haaland but Harry Kane is having a fantastic start to the season.

Superb form ahead of the World Cup 🔥 pic.twitter.com/3EfZUOwmQD

Speaking to Sky Sports, Harry Kane – who netted his ninth Premier League goal of the season – said Spurs got their rewards for being patient against a tiring Everton.

“We had to be patient. The spaces opened up as they got tired; thankfully we kept knocking on the door and got a couple of chances. It was a really good win.”

Kane’s goal follows up a miss from the spot in Spurs’ midweek win over Eintracht Frankfurt, and he was asked about stepping up against Three Lions teammate, Pickford.

“He made a couple of good saves and I snuck the penalty past him. Happy to get on the scoresheet again; it has been a tough week with loads of games. We’ve got to recover well and get ready for Wednesday.

“Whenever you miss a penalty the next one is the most important one. I’ve practiced so many against Jordan and I feel like I’m coming up against a lot of English keepers this season. It was nice to get that one, it was really important.”