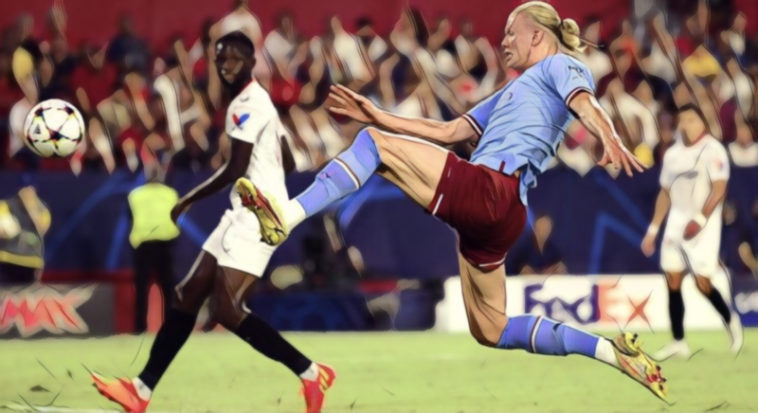 Manchester City began their Champions League campaign by comfortably beating Sevilla 4-0 away in Spain in their opening group stage game.

Sevilla started the game in a confident fashion, but after 20 minutes the freak of nature that is Erling Haaland had snuffed out any hope the struggling La Liga side had of causing an upset. The 22-year-old ghosted towards the back post where he was found by the brilliant Kevin de Bruyne and Haaland duly added the finishing touch from close range.

Just before the hour mark Phil Foden made it two, the young England international twisting and turning in the box before despatching a low strike into the bottom corner.

On 67 minutes Haaland had his second, Sevilla ‘keeper Bono could only parry a Foden shot into the centre of the goal and the lethal striker raced in to slot home.

A minute into injury time and centre-back Ruben Dias put the icing on the cake when the Portugal international tapped home a Joao Cancelo cross from the right.

Erling Haaland is the first player EVER to score 25 goals in his first 20 Champions League appearances 🔥 pic.twitter.com/tcsOYugRYa

“I think his numbers across his career, not just here, is quite similar,” Guardiola told BT Sport.

”So he has an incredible sense of goal. We have incredible numbers in scoring goals, so we want to continue like that. Another battle next Saturday against Tottenham, so hopefully he can continue scoring goals.”

Guardiola went on to reveal that he was also delighted to see academy graduate Phil Foden get on the scoresheet.

”Phil has an incredible thing, lately he is not playing so good like normally. But he’ll always do a job and always run and always fight for the team. I’m pretty sure the goal and the assist today will help him.”