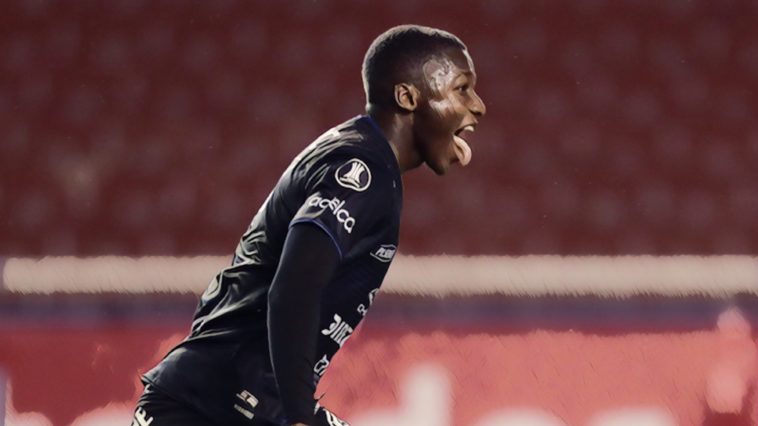 Moises Caicedo is on the verge of signing for a Premier League club, but who is he? And what sort of player is he?

Manchester United‘s recruitment seems to have taken a shift in recent years. While the club made a significant outlay on the purchase of Donny Van de Beek from Ajax and signed veteran striker Edinson Cavani on a free transfer, Ed Woodward seems reticent to splash the cash on big-name, glamour players in the same way he once did.

The acquisitions of Facundo Pellistri and Amad Diallo suggest that Man United are adopting a more long-term approach with their transfers, seeking to purchase young players and develop them within their own ranks. Given this shift in strategy, their links to Ecuadorian sensation Moises Caicedo make perfect sense. That they have reportedly turned down the opportunity to sign the precocious youngster is, therefore, somewhat bewildering, but that is no slight on his immense promise.

Manchester United are now oriented *not* to sign Moises Caicedo. 🔴

He’s been scouted and Man Utd were in control of the situation because Moises’ dream was to join #mufc, but he’s not the priority. It was *never* a done deal.

‘Caicedo race’ is now on with many clubs involved.

At just 19-years of age, Caicedo has already been capped for his country and cemented himself as a key player for Independiente Del Valle. While he rose to prominence as a defensive midfielder, Caicedo has since established himself as an eight in Miguel Ángel Ramírez’s side. Playing in a 4-3-3 or 4-1-4-1, Caicedo primarily occupies the right half-space while sometimes dropping deeper to assist his team in build-up.

Defensively, Caicedo demonstrates excellent ball-winning ability. He often tackles with one outstretched leg, which allows him to keep his body upright and more easily recovers it once it’s knocked loose from an opponent. It also makes him less likely to commit needless fouls because his challenges are easier to time. His physical attributes obviously aid him in his ball-winning. Caicedo’s mobility means he can easily get on the ball-side of an opponent regardless of his starting position, while his strength means his challenges are routinely effective.

But there’s much more to Caicedo’s defensive ability. When a player squares up to him, he shows excellent composure and judgment, rarely committing too early and reading the direction his opponent will attack in well. He shifts his feet with small steps so that he can maintain his balance and make it harder for opponents to go past him. He’s constantly turning his head and scanning the pitch when he’s out of possession as well, allowing him to find pockets of space to receive the ball, find potential passing options for when he gets the ball, and position himself in the ideal place to retrieve possession for his team. These are just some examples of the ways in which Caicedo shows sound technical and tactical skills, ones that will serve him well in his transition to European football.

Caicedo’s biggest issue from a defensive standpoint is his lack of intensity. He can sometimes be lethargic when regaining his position during defensive transition, while also being reticent to pressure players if they break free from their opposite marker. According to Statsbomb, he ranks in the 2nd and 4th percentile for pressures and pressure regains respectively in the Ecuadorian Liga Pro, a dismal showing for a player of his profile.

Caicedo prefers to hold his position and only make a challenge when necessary rather than actively instigating challenges. This isn’t a uniformly bad thing, but ideally, Caicedo would be able to pick and choose when he is more passive and when he is more proactive. At present, he doesn’t demonstrate the stamina and intensity that allows him to aggressively cover large swathes of space. This is perhaps one of the reasons Caicedo has been moved away from being a number six to becoming a box-to-box number eight.

Another reason for this is his impressive passing ability. His long passing is excellent, capable of switching the play across the width of the pitch or finding advancing runners with more vertical passes. He can execute penetrative passes through lines of opposition pressure and seems capable of consistently playing these passes even when under pressure from an opponent. There are also moments where Caicedo shows immaculate vision and control, playing delicately chipped through balls or back-heel flicks.

That isn’t the primary part of his passing repertoire, but it shows an impressive range of abilities. Caicedo isn’t always as adventurous with his passing as he could be, and he is also prone to loose touches and simple passes which can invite defensive pressure from opponents. Ultimately, though, his passing is generally a positive aspect of his play and he shows the raw technical abilities to suggest he can be a better progressor of the ball in the future.

One somewhat surprising aspect of his play, given that he first emerged as a defensive midfielder, is his goal-scoring. He routinely makes smart third-man runs to give Independiente Del Valle another option from crosses. Caicedo is particularly excellent at finding space in the box, often changing the direction of his runs into the area to deceive opposition markers. He’s not amazing in the air, his shot is powerful but not particularly accurate, but his awareness and intelligence in the box mean that goal-scoring can potentially be a significant feature of his game in the future.

It’s little wonder why Caicedo has been the subject of interest from a host of Premier League clubs. His passing range will be a useful addition to a team that thrives on quick transitions and attacking space in behind, while his tackling and positional sense will provide the sort of stability that can allow more creative players to dictate play from higher up the pitch.

However, he would need to show greater defensive intensity to be a viable box-to-box midfielder in the modern game. Of course, his greatest challenge will be making the transition from the Ecuadorian league to English football. He’ll likely spend his first couple of years in England on loan in lower divisions or in the U-23’s to ease that transition over a period of time.

Caicedo has been linked with Everton, Newcastle and West Ham United, but it looks like Brighton are going to win the race for his signature. With Yves Bissouma reportedly on the verge of an exit from the Seagulls, Graham Potter could fashion the Ecuadorian into his replacement. While not quite as well-rounded and energetic as Bissouma, he can still bring a lot to Brighton’s midfield and be the latest addition in a young squad with an engaging play style.

Irrespective of where he goes, Moises Caicedo has the talent ceiling and tactical profile to be an excellent, modern-day box-to-box midfielder.

Read: Dele Alli, Liverpool centre-backs and the narratives that will dominate the January transfer window

See Also: The Premier League’s most underused players who need to move clubs this month