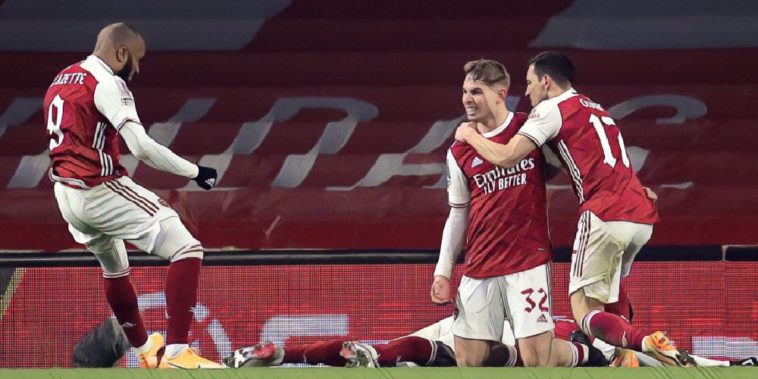 Arsenal needed extra time to book their place in the fourth round of the FA Cup with a 2-0 win over Newcastle.

It was a frustrating first half from both sides, and in all honesty, the second half wasn’t much better, with both teams guilty of some wasteful finishing.

Pierre-Emerick Aubameyang and Joe Willock missed chances for Arsenal, while Andy Carroll had two excellent opportunities for the visitors to open the scoring, including one at the death which was smartly saved by Bernd Leno.

There was a bit of drama as the game ticked into added time as youngster Emile Smith Rowe was shown a straight red card for a challenge on Sean Longstaff, though was quite rightly downgraded to a yellow upon review by VAR.

With replays off the agenda in this year’s FA Cup amid the congested fixture schedule, the game went to extra time and in the 19th minute of the additional period, the game finally had its breakthrough, Smith Rowe striking low past Martin Dubravka from a narrowing angle following a flick on from Alexandre Lacazette.

The FA Cup holders confirmed their place in the fourth round with three minutes to play, Granit Xhaka slipping a well weighted ball into Kieran Tierney who fizzed a first time cross into the centre, with Aubameyang netting from close range.

Speaking after the game, goalscoring substitute Smith Rowe said the result highlighted the Gunners’ togetherness, the north London side having recovered from an awful run of form to now win their last four games, while insisting his challenge on Longstaff ‘wasn’t intentional’.

“I was really happy, a bit of a relief for me with the [red card] incident before – it definitely wasn’t intentional – happy to get the goal and get through to the next round,’ the youngster told BBC Sport.

“We knew how tough it was going to be, they’re a tough opponent. It was about breaking them down. From a young kid I have always wanted to play for this club, I am really happy.

“It shows how together we are, we have been working off the pitch to get closer as a group and it shows.”

Next up for Arsenal is a home game against Crystal Palace.

Player Analysis: Is Moises Caicedo the Premier League’s next starlet?