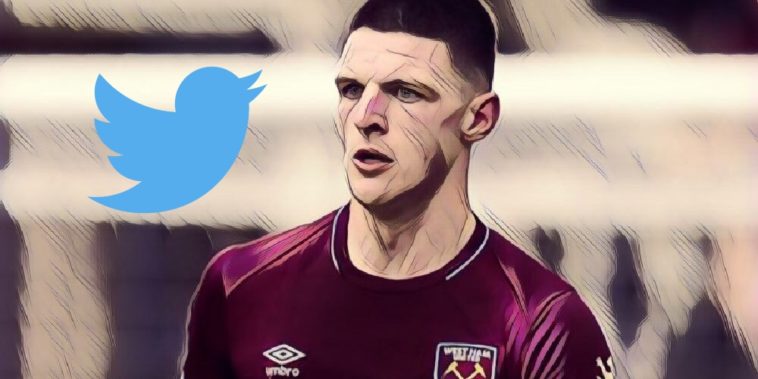 Declan Rice’s declaration that he was switching international allegiance from Ireland to England received a huge response on Twitter, some of it angry, a LOT of it very funny.

Unless you’ve been under a rock for the past few hours, you’re aware of the announcement of a certain West Ham United defensive midfielder over which country he has chosen to play for.

Yep, after months and months of speculation, Declan Rice picked… England. Football fans took to Twitter to express their delight, anger, confusion and memes on the #Decision, with predictably hilarious results.

England fans were naturally delighted with the decision:

Getting Declan Rice from Ireland is probably the only successful trade deal the UK are going to negotiate with the EU this year.

There were a lot more Ireland supporters who, unsurprisingly, were not:

If you’re a “proud Englishman” then why play for us in the first place?

Declan Rice: "I am a proud Englishman"
Ireland: pic.twitter.com/rcCojq42DU

Declan Rice has declared for England. That's a tough one to take for Irish football – and a reminder of the perils of being too reliant on players you don't produce yourself

See some people wishing Rice well with England. I'm not a nationalist. I don't hate England. But to be honest, I'm not sure I can wish him well really. I don't wish him ill either. Maybe its best to say that he's just dead to me now.

Declan Rice hates Irish football so much he made his announcement in the run up to the LOI kick off.

Thank fuck this is over. He's prouder of his English heritage than his Irish one – fair enough. Only regret is he ever put on the green in the first place. Let's learn that lesson, at least. Onwards.

Devastated Declan Rice has declared for England, he would have been perfect up front with Declan Chips and Declan Curry-Sauce.

How could you kiss the badge of a country and then move pic.twitter.com/YJOrOs65HP

Others meanwhile pointed to the major problem in all this, which is FIFA’s eligilibility rules allowing a player to switch allegiance despite being capped:

We have lost a player who could turn out to be amazing (likely, given the season he is having), but most galling is the fact that he won three SENIOR caps. Whatever about underage switches, this rocks the integrity of international football. FIFA need to take stock.

Declan Rice declaring for England is especially disappointing considering the fact he played for Ireland the whole way up and was even capped by the senior team three times. Irish football is a mess though so you can see why he made the decision.

Meanwhile, some chose to see the upside of the whole episode:

The up side to the whole Declan Rice thing – @iresimpsonsfans will have some absolute gold today. pic.twitter.com/6QPwjg7kQj

Read: Ranking the Champions League round of 16 matches in order of intrigue