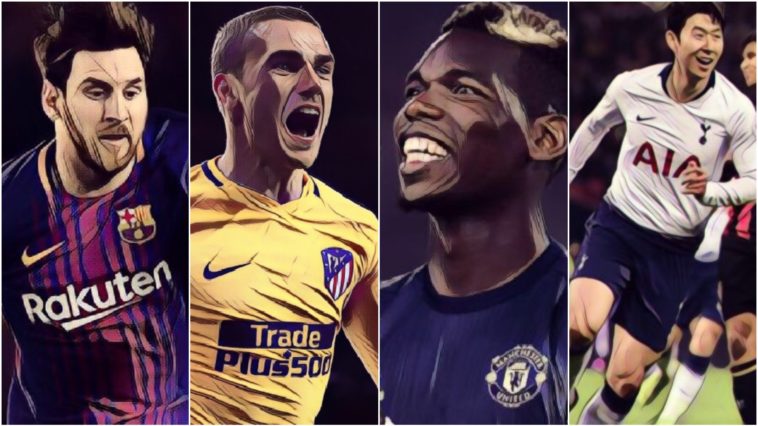 The Champions League is back and there are a host of tantalising match-ups to look forward to, with a whole host of teams capable of going all the way to the final in Madrid.

For the past five years ol’ mouse ears has been a distant dream for European football’s most ambitious sides, unless of course your team name happens to be Real Madrid or Barcelona. No other club has come close to disrupting the Iberian duopoly since Bayern Munich won an all-German final back in 2013, with Los Blancos winning four of the five since then.

Don’t say it too loudly now, but this could be the year someone else comes along and claims the prize for themselves. The playing field looks more open than ever before: the Spanish giants will be in contention no doubt, but the likes of Juventus and Manchester City offer a sterner challenge than in previous years, while Atletico Madrid and Liverpool will be desperate for another bite at the cherry following recent final disappointments.

Then there are the pretenders: Spurs, PSG, Borussia Dortmund, Manchester United and Roma, none of whom would be considered favourites, but could engineer themselves into the picture with a deep run in the competition. The upcoming ties, and the potential ones in the next round, look positively tasty as Europe’s middle-class closes the gap on the super clubs.

We’ve been here before though, and what appears to be a competitive field turns into a procession for Real. Whether anyone can take them down is another topic for another day, but for now, let’s take a closer look at the fixtures we’re looking forward to the most.

Unfortunately this has all the makings of a highly uncompetitive tie, with Schalke coming up against Man City just as the Premier League champions are getting their mojo back. The Gelsenkirchen club have only won two of their last five Bundesliga fixtures and lie seven points outside the Champions League qualification spots, and there’s every chance they could miss out on Europe next season altogether. You probably won’t be missing much if you don’t happen to catch this game.

An intriguing tie given how much trouble the French side gave Man City in the group stages, and Barcelona haven’t exactly been stellar themselves this season. A forward line of Nabil Fekir, Moussa Dembele and Memphis Depay could give their defence a torrid time over the next few weeks. Still, La Blaugrana are probably slight favourites to win the whole thing and they should come through this fixture relatively unscathed, even if OL give them a few scares.

Neither of these teams can call the Champions League a realistic goal this season, but Roma had a terrific run to the semi-finals last year, while Porto have an impressive pedigree in European competition. Both sides have good squads, play good football, and would look at this as a winnable contest. It promises to be a close one.

When the draw was made, Ajax probably couldn’t be blamed for being relatively happy with their pairing. After all, Real Madrid were in crisis, had sacked their manager, and could barely win a game in LaLiga. The reigning Champions League winners have rediscovered at least a semblance of form under new boss Santiago Solari, returning to second in the table after a big win over Atleti in the Madrid Derby on Sunday.

No one would be surprised to see the 13-times winners get to another final amid all the madness, but this tie is a fascinating clash between the greatest collection of young talent in the world versus the most decorated and successful team on the planet.

This game looked more competitive when Harry Kane was still fighting fit, but his absence hampers Spurs’ chances a great deal. Borussia are no longer the team of Robert Lewandowski, Ilkay Gundogan and Mats Hummels, the star power that drove them to the Champions League final in 2013. Instead they now rely on youthful prospects like Jadon Sancho and Chelsea-bound Christian Pulisic, with a sprinkling of wily veterans in between.

BVB are five points ahead of Bayern Munich in the title race, but they haven’t won their last three matches in all competitions, which means it could be the right for Spurs to ambush the North Rhine-Westphalia club. The most interesting aspect of this tie should be the tactical battle between Mauricio Pochettino and Lucien Favre, both of whom have a history of maximising their team’s shot efficiency.

A proper clash of heavyweights, both clubs have five European Cup trophies apiece and are determined to add another to the honours list. Istanbul is beginning to feel like a long time ago for the Reds at this stage, while Bayern are aiming to show their desire for glory by winning a second in the space of six years.

Luckily for Liverpool, this is not a vintage Munich side, with the Bavarians struggling domestically under new manager Niko Kovac for much of the season, but that doesn’t mean they don’t have the weapons to hurt them. The Merseyside outfit, after all, are keeping their defence together with gaffer tape thanks to recent injury woes, although the return of Trent Alexander-Arnold is a boost. The anxiety of a title race could also pull them off course.

With Liverpool’s penchant for absorbing European battles and Bayern’s firepower in the final third, this could be the most fun bout of the lot.

There’s a decent chance this fixture will not be as entertaining as the above one, but it will be engrossing for the narrative aspect alone as this tie has the potential to define an entire season. Year in year out, PSG’s season essentially begins (and often ends) at the last 16, with French domestic competitions more or less a foregone conclusion. For Man United the positivity and optimism of Ole Gunnar Solskjaer’s unbeaten start to life as caretaker manager could be popped like a balloon at a children’s birthday party, sucking the joy out of the whole thing in one go.

United should be confident going into this however, especially since Neymar was ruled out through injury and Edinson Cavani appears to be a major doubt to play in the first leg as well. What a difference a few months makes, as United were not deemed to have a chance when the draw was revealed, such was the toxicity surrounding then-manager José Mourinho. This will be a must-watch encounter.

Speaking of season-defining games, the stakes could hardly be higher for a round of 16 tie. Juventus have put all their eggs in the Champions League bucket by drafting in Cristiano Ronaldo, hoping to end over twenty years of final heartbreak. Atletico, meanwhile, are running out of opportunities to finally reach the summit of European football, having conquered just about every challenge bar their cross-city rivals under Diego Simeone.

It might not be the most aesthetically pleasing game of ball of the round, but it will be the most tense, and possibly the most thrilling in that sense. Atleti are a stressful team to support, with important games going right down to the wire as they come under more and more pressure. While many would consider their approach as defensive, they are as aggressive as any team in Europe and won’t give an inch to anyone. Oh, and the final is in their home ground.

Juve’s new Ronaldo-shaped dimension gives them the ultimate key to unlocking Europe’s most prestigious prize, but it is the smattering of stars around him that will determine how far he can take them. Whoever comes out on the other side of this will lay down a marker for the rest of the tournament.