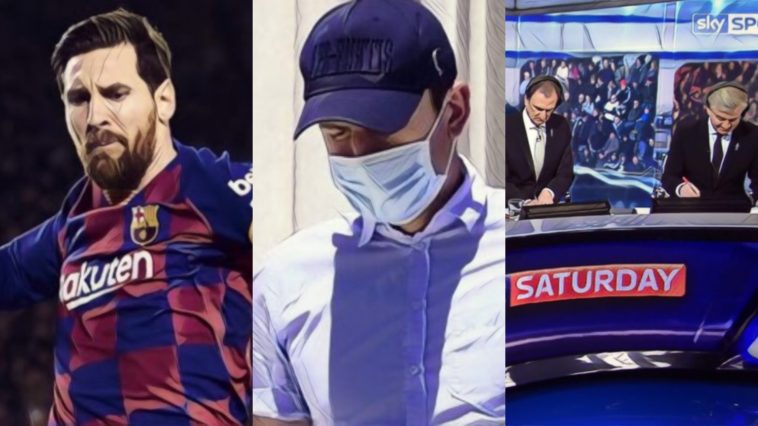 Here are the best football tweets of the week, featuring the recent developments in Lionel Messi’s bid to leave the Nou Camp, Harry Maguire receiving his sentencing in Greece, the beloved Soccer Saturday getting their marching orders, and more.

The world has changed so much since Messi first signed for Barcelona.

Signed by napkin, left by fax. An analogue man in a digital world

If he can’t sort out his contract issue with the club, who knows what lies ahead in his future?

If I were Messi I’d give up on football and learn coding, it’s the future

It’s a global story, but you should always look for that local angle.

The question is: where to next?

“Why I’m Joining The Athletic,” by Leo Messi.

No matter what he decides to do next, he has the backing of his mates.

Another penalty for United https://t.co/nnh9FszFzw

Harry Maguire found guilty on all charges in Greek court

The story took a lot of twists and turns.

I am in tears. This has gone from a fight in a pub to the plot of Taken ? https://t.co/fKHs5ZybIY

The Man United captain will need to repair his reputation.

Live footage of Harry Maguire after his guilty verdict… pic.twitter.com/cG6z03D9ai

Maguire claims he thought he was being ‘kidnapped’ while in Mykonos

At least his job is secure for now, unlike Phil Thompson, Charlie Nicholas and Matt Le Tissier at Sky Sports.

SACKING at Soccer Saturday….but WHICH way has it gone…?

The new panel will raise a few eyebrows.

Is this the new Soccer Saturday panel? pic.twitter.com/TuonQSx0Vf

Pre-season has both started late and come around very quickly at the same time this year.

Ah, here it is – every year, without fail – the uniquely pre-season Impossibly Slow Goal-Celebration Jog. The slowest run the human body can break into. pic.twitter.com/7zvzuLNBqK

So this is the fabled ‘United Way’.

Van De Beek transfer apparently ‘imminent’ so translated into Man United context that means another 3 weeks of price haggling for the deal to fall through and be abandoned. Can’t wait ??? pic.twitter.com/Vyo3vPUxDt

Wigan Athletic have started a brilliant campaign to try and save their club.

? The time is now to save OUR club…https://t.co/wicUgtWmjR

? A huge thank you to James McClean who has pledged £5,000 to Save Our Club ?https://t.co/HwN8xDOgPo#wafc #scfc pic.twitter.com/RVMHfiAkDn

Patrice Evra does not look right in a number 11 jersey.

The Middlesex County League side were beaten 3-2 by North Greenford Unitedpic.twitter.com/uyv1u1bOIH

This one cut me deep.

The most underwhelming Premier League kits of the 2020/21 season

I have no idea what to make of this video.

And finally, let’s end on a pun.

See Also: How Everton legend Neville Southall became a voice for the voiceless