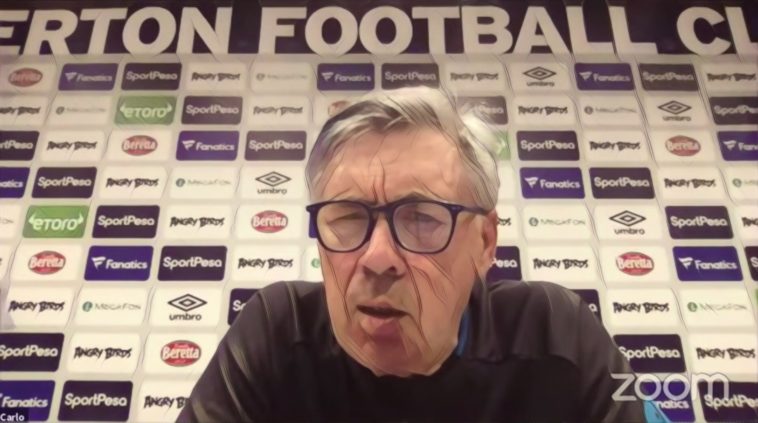 The best tweets from the world of football this past week, featuring Liverpool getting battered and bantered, Premier League managers rated as potential step fathers, a very confused Carlo Ancelotti and so much more.

They won the league but everyone enjoyed seeing Liverpool getting hammered by Man City this week.

When they said City were gonna give us a clap today, I wasn’t expecting this

Considering they must have been partying without sleeping for the last 3 days, I think Liverpool are playing very well.

They won the all-important pre-match battle, though.

Liverpool in the Liverpool actually
guard of honour playing the game pic.twitter.com/285yJMSGQ6

He had us in the first half, not going to lie.

I remember winning a league with one game still to be played. Celebrations lasted a few days and the hangover even longer! We lost our last game 6-0, but had a cup final still to play. We used that loss as motivation to go on and be crowned Under 15 league and cup winners 2005

The best Liverpool vs Man City matches from the past decade

It’s been a big week for the pubs too, don’t forget.

Arsenal are the Premier League’s official banter club, but we need to appreciate just how bad Spurs have been this year.

Hate this model of TV series getting shorter and shorter. Everything’s just a miniseries now. Whole arc of Mourinho arrival to implosion condensed into one year.

Carlo Ancelotti didn’t even know the player he was being asked about.

At least Luke Garbutt took it in good spirits.

There you go Carlo look at what your missing @Everton 😅 pic.twitter.com/kh0Q51lj8K

They won’t make that mistake again…

"Excuse me, but are you Luke Garbutt?" pic.twitter.com/kFHWwMwWvg

This thread is the most factual thing you will read all week.

Cons: A little bit on the older side, & a bit of a disciplinarian around the gaff but consistent with this & generally fair.

Pros: top level of banter for an old bloke & loves a chippy tea. Happy to share a few cans with you too on the weekend

This is equal parts nice and awkward.

A special moment between the Gaffer and Mourinho post-match 👏 pic.twitter.com/0cMf8PKLAW

The comeback of the year is on.

You have got to make those 120 seconds of a match count.

Every Irish footballer to have played in Serie A

It’s official: OGS is just like yer da trying to figure out how video calling works.

Every single Zoom meeting in 2020. pic.twitter.com/hZWNwW6M3I

The Wycombe Wanderers has a ‘look’ anyway, that’s for sure.

That’s what I call a false economy.

When you order Aguero and Kompany off wish https://t.co/hOn1cbJf7D

Give the Nuge his respect.

statistically the greatest england striker of all time.

and wayne rooney's there too. pic.twitter.com/bHyiiJo54h

This offside decision is so bad that it’s making me mad 30 years on.

Doing some research on the Italia '90 third-place play-off – this goal was ruled out by possibly the worst offside decision I've ever seen… pic.twitter.com/XGC1hWSitZ

Gone without a trace.

The most random football video games you forgot even existed

Speaking of, this is surely goal of the century.

Here's my application for the best goal in Football Manager 2020 pic.twitter.com/j5IVk7gm3Y

If you get it immediately you belong in the elite tier.

I don't care if Monday's blue
Tuesday's grey and Wednesday too
Thursday, I don't care about you
It’s pic.twitter.com/9wKTbnUAI8

Read: Five of the Premier League’s most iconic goal celebrations

See Also: Five of the best comedy football sketches ever