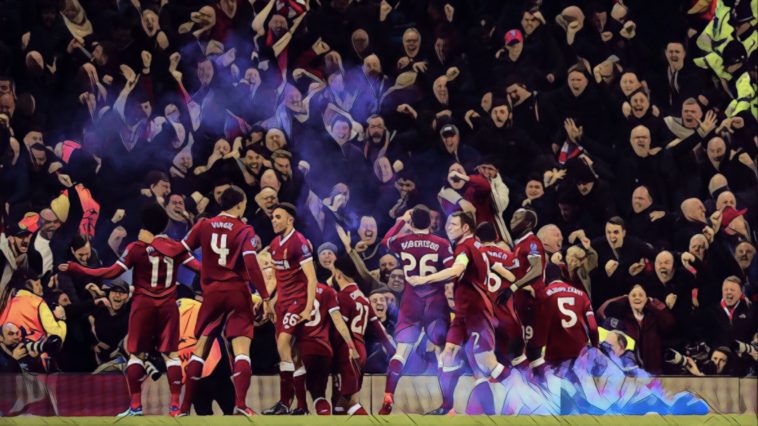 From stirring three goal comebacks to bus bombardments, Liverpool and Man City’s rivalry has grown in intensity and acrimony over recent years.

The latest chapter of a modern rivalry is set to take place this evening as the two teams meet in the Carabao Cup’s fourth round at the Etihad.

Liverpool and Manchester City have gone head-to-head for major trophies in recent campaigns and have shared the past five Premier League titles, with the duo embroiled in a title race that went down to the wire last season.

Ahead of their latest clash, we look at five clashes that ignited the Liverpool and Manchester City rivalry.

Defining Liverpool vs Man City matches of the past decade:

After a runners-up finish in 2009, it would be another five years before Liverpool would challenge for the Premier League. In the meantime Man City had won their first top-flight title in 44 years, supplanting the Reds as one of the best teams in the country.

Under Brendan Rodgers though, they embarked on an incredible 11-game winning run in the 2013/14 campaign that put them in the driving seat for first place. The Northern Irishman had his charges playing a chaotic brand of football which was very much the embodiment of “you score three, we’ll score four”, empowered by the likes of Luis Suarez, Philippe Coutinho and a very young Raheem Sterling.

Liverpool’s home meeting with City in April of 2014 was a classic example of this. They took a deserved two-goal lead through Sterling and Martin Skrtel after 26 minutes and should have seen the game out without a bother. But a David Silva strike and a Glen Johnson own goal after the break shifted the momentum entirely. Typical.

But just as they had done so many times on that unbeaten streak, they just would not die; Coutinho capitalised on an uncharacteristically poor clearance from Vincent Kompany to smash a winner home in the 78th minute.

After the final whistle Steven Gerrard gave his famous “we go again, do not let this fucking slip” speech to his teammates as they leapt ahead of Chelsea in the table, but it was sadly a precursor for things to come; the captain did indeed slip in a 2-0 defeat to the Blues, before drawing 3-3 at Crystal Palace.

This 3-2 win was the one that gave them the belief they could win the holy grail, but it’s the hope that kills you. That, and Tony Pulis.

Man City were a juggernaut in the 2017/18 campaign, something Liverpool learned very early on in the season. The Reds started off well, but it was the hosts who took the lead after 24 minutes through Sergio Aguero. If that wasn’t bad enough, disaster struck for the visitors soon after.

Struggling to latch onto a long ball from Joel Matip, Sadio Mane inadvertently booted goalkeeper Ederson square in the face. The Senegalese was predictably sent off for the challenge, landing his side with the most uphill of tasks. With a defence featuring Ragnar Klavan and Alberto Moreno, they simply weren’t up to it.

A brace apiece for Gabriel Jesus and Leroy Sane completed a major demolition job of Jurgen Klopp’s charges. The final goal was the best of the lot, the German winger left in acres of space on the edge of the box to send the ball top bins.

Liverpool fans claimed that their side had outplayed City before the red card, which was viewed as a laughably pointless piece of analysis, but they would have the last laugh in the next three meetings between these two.

City topped the league by 15 points, having won 20 of their opening 22 games of the season, drawing the other two. They were looking well to emulate Preston North End and Arsenal, the only two clubs in English football history to go an entire top-flight league season unbeaten.

And having crushed Liverpool earlier in the campaign, few would have bet on City leaving Anfield with anything less than a point at least. But they ended up with their first defeat of the campaign.

Liverpool and Man City played out a #PL classic #OnThisDay in 2018 pic.twitter.com/eSa37xtJpl

A collection of spectacular goals from Alex Oxlade-Chamberlain, Roberto Firmino, Mane and Mohamed Salah gave the home side a shock 4-1 lead after 70 minutes, with the only response coming from Sane.

Although Virgil van Dijk had signed for Liverpool at this point, he wasn’t in the team here, and this was also before they had bought Fabinho and Alisson Becker, so there were still huge holes in their defence.

In a game that should’ve been dead and buried, there was still a chance for City, who scored twice late on through Bernardo Silva and Ilkay Gundogan. It wasn’t enough though, as they finally tasted defeat at the final whistle.

This felt like a weird one-off result at the time, but it was actually a harbinger of the challenge Liverpool would bring to City over the next couple of seasons.

That challenge would come sooner than expected, as the two Premier League clubs were drawn together at the quarter-final stage of that year’s Champions League.

Anyone who expected a similar kind of ding-dong battle to the one that occurred just three months previously were in for a rude awakening, as Liverpool unexpectedly destroyed City. It was no fluke either; they dominated the game from start to finish, and looked decidedly more comfortable at the back with Van Dijk in the starting line-up.

Mane and Salah scored either side of an Alex Oxlade-Chamberlain screamer to give themselves an incredible lead, all within the first half-hour of the game. But the main talking point after the match concerned the Man City bus, which had been pelted by objects from the home support as it made its way to the stadium. Did it rattle them? Who knows for sure, but it certainly looked that way.

There was no miracle comeback in the second leg, as Liverpool won 2-1 at the Etihad and made a run all the way to the final. As the two best teams in the country, and arguably the top two in Europe, they have played each other so many times in big games that they know each other inside out. That has led both Klopp and Pep to be more conservative in their tactical approach whenever they face each other these days, but every time they meet it is a fascinating encounter nonetheless.

Title races are never decided in November, but this result essentially consigned Man City to also-rans. Holding a five-point lead in the table going into this match, Liverpool seized the initiative and never looked back.

After just six minutes of play Fabinho hit a stunning effort from range to open the scoring and by the 13th minute Salah had doubled their lead. It was the first time since December 2016 against Leicester City that City had conceded twice in the opening 15 minutes of a league match.

Any chance of a comeback was smothered just after the second-half began, as Sadio Mané struck home in the 51st minute. A Bernardo Silva consolation late on could not hide the reality that was now facing City: Liverpool were going to be champions.

City were missing two key players in the form of Ederson and Aymeric Laporte, meaning Fernandinho had to play alongside John Stones in the centre of defence. They couldn’t handle the ferocity of the host’s attack and it was only natural that they succumbed to such a battering.

The previous season Liverpool came within literal millimetres of scoring the goal that may have been enough for them to win the league, only for Stones to clear it off the line in the nick of time. This time they were definitive and didn’t let the opportunity slip through their fingers.