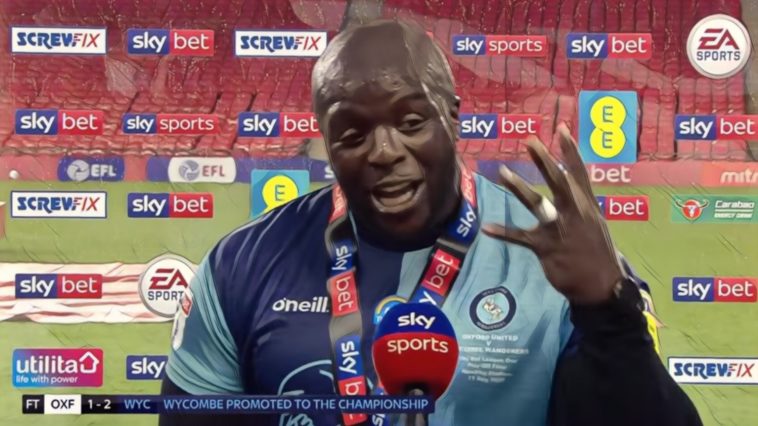 If the past four years of Beast Mode’s career was a Hollywood film story arc, this week would have been the perfect ending.

Actually, this was the happy ever after he deserved.

Adebayo Akinfenwa asked Jurgen Klopp to 'hit him up on Whatsapp' after Wycombe's promotion and the Liverpool manager didn't disappoint! ?? pic.twitter.com/MLxIAyFkCd

He wasn’t the only one enjoying his team getting promoted.

Whatever you think of Leeds United, you can’t help but be happy for Marcelo Bielsa.

His backroom staff are probably cursing him, however.

Spare a thought for Marcelo Bielsa’s coaching staff, whilst we all celebrate they’re just about to start binge watching every Burnley game since 2007.

And Frank Lampard is definitely sweating.

If Marcelo Bielsa doesn’t inflict an absolute pummelling on Frank Lampard’s Chelsea next season before giving a PowerPoint presentation in Costa Coffee Wetherby explaining exactly how he did it, we can just sack football off.

But Pep Guardiola will always have mucho respect for the real G.O.A.T.

This does not make for pretty reading for Liverpool fans…

The Premier League’s five most relegated teams ever

.@MarcusRashford made them disappear ? pic.twitter.com/lKiM0x6DF1

Will Kai Havertz break into the team, though?

That is so many footballs.

Okay, but the thing is I’m really good at it…

men hating women for liking astrology .. u literally play a game of spreadsheets where u pretend to be the manager of a football team

This guy has FPL sussed out though.

Premier League managers should take note of this.

I don't think you're ready for this, but here's the best free-kick in the history of football. Absolutely amazing stuff. pic.twitter.com/CN2M0pisCo

Some people have far too much time on their hands.

Read: Appreciating Darren Anderton and his wand of a right peg