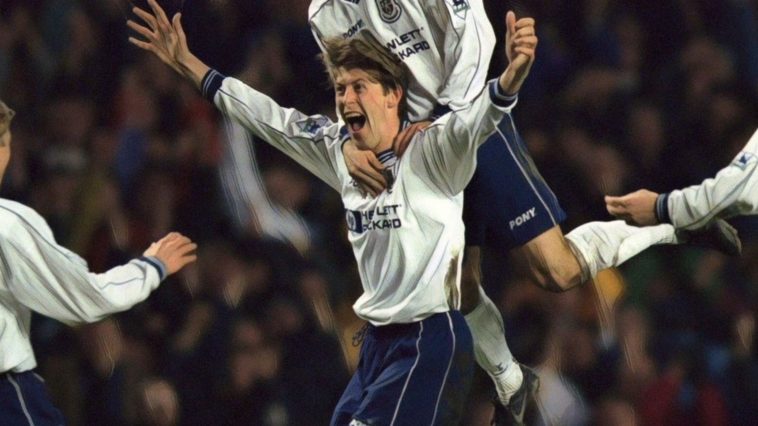 If there were ever any doubts raised about the consistency of Darren Anderton, then one need not look further than his head of hair.

For the past thirty years the former Tottenham Hotspur player has steadfastly refused to change up his barnet, instead sticking with the tried and tested curtains to this very day. As a footballer he was more adventurous, but his overall game matched his coiffure: reliable, dependable, persistent.

It was these traits that aided Anderton to become Spurs record appearance maker in the Premier League, lining out for the club 299 times, and play for his country at two major tournaments. He scored a few spectacular goals along the way, and set up so many more for quality strikers such as Teddy Sheringham, Les Ferdinand, Alan Shearer, Jurgen Klinsmann, and Robbie Keane.

But before all that, Anderton’s story began on the south coast. Although he was Southampton born and bred, at 18 years of age he ended up signing for Portsmouth in 1990. His career was really kick started by the team’s FA Cup run in 1992, during which he scored a brace against Leyton Orient.

Anderton opened the scoring with a stunning volley in off the post; the woodwork would become a recurring theme in his most famous strikes. He had developed a superb link-up with Guy Whittingham that season, with the future Sheffield Wednesday striker supplying a gorgeous pass over the top of the Orient defence to set Anderton up for his excellently finished second goal.

He scored seven goals in total for Pompey, but it was his final goal for the club that was his most famous – against Liverpool in the FA Cup semi-final at Highbury.

Portsmouth were able to take the Reds to extra-time, with the game scoreless after 90 minutes. With ten minutes left in the match, Anderton met a long ball in the final third and was through on goal. His shot wrong footed Bruce Grobbelaar and the Second Division side were, sensationally, in touching distance of Wembley.

Alas, the underdog’s hearts were broken as Ronnie Whelan scored an equaliser just five minutes later, taking the game to a replay. Once again it was scoreless after full-time, but Liverpool won on penalties.

For Portsmouth, it was the end of a dream, but for Anderton it was the beginning of his journey. Spurs paid £1.75m to sign him, a bargain given what they got in return.

Anderton started out as a striker and was given the number 9 when he arrived at White Hart Lane, forming an exciting relationship with Sheringham and Nicky Barmby. Many of his goals in the early part of his time at the club came from deep inside the box, showing a striker’s instinct.

Transitioning to the role of a wide attacker as time went on, he became much more of a creative force on the wing or just behind the frontline. He never lost that eye for goal, though, popping up every now and again in the box to punish opposition defences. But as became apparent for both club and country, he developed a taste for long-range belters.

Anderton ‘only’ won 30 England caps in his career, and should have had many more, but his time with the national team was potted with some brilliant finishes, scoring seven in total for his country.

His first goal came against Greece in May 1994, a game which marked a new era for the England team following the bitter disappointment of their failure to qualify for that summer’s World Cup. Terry Venables was taking the team from transition to finished article, of which Anderton was to be a key part.

He was one of four goal scorers that day as the Greeks were thrashed 5-0 at Wembley, a scoreline that might have made neutral viewers wonder which of these countries were actually going to be playing in a major tournament in just a month’s time.

Anderton didn’t score again for England for over a year, but when he did he scored twice in the space of five days. He got the opening goal in a 2-1 win over Japan in the Umbro Cup, a warm-up tournament held ahead of Euro 96.

That was followed up by one of the most spectacular goals ever scored by a player in an England shirt. With the clock ticking towards full-time and the team losing 3-2 to Sweden at Elland Road, Graeme Le Saux bombed the ball forward in the hopes of creating one last chance.

Teddy Sheringham headed the ball into the path of Alan Shearer, who in turn nodded it down for the onrushing Anderton, coming in off the right wing. Instinct took over and the Spurs man hit it on the half volley towards the goal, crashing off one post, then the other before landing in the net for the equaliser.

That double crash off the woodwork is one of the most satisfying sounds you’ll hear in football, and Anderton later said he “never struck a ball so sweetly in my entire career”. You could well believe it.

Although England didn’t win the Umbro Cup, eventually losing to reigning world champions Brazil, their display in the mini competition showed they were on the right track. Injury struck at exactly the wrong time, however, and he only made six starts in the 1995/96 Premier League campaign.

This is what Anderton claims to be the source of his inescapable reputation as ‘Sicknote’, the misfortunate nickname bestowed upon him by former Portsmouth teammate Andy Gosney and seized upon so ruthlessly by the tabloid media. He claimed that manager Gerry Francis was asked incessantly about the player’s fitness in the lead up to Euro 96

Although he recovered in time for the tournament, his fitness and reputation were never quite the same again. Still, he made the most of Euro 96 as England went all the way to the semi-finals. It was here that Anderton came within inches of a life-altering moment, as his close-range shot against Germany in extra-time came out off the post.

Off the post!@England are inches away from the winner as @DarrenAnderton strikes the post! Terry Venables can’t believe it! Neither can we 😩#Euro96Relived #ITVFootball pic.twitter.com/NfCDMcXV26

It was the most famous goal he never scored, company he shares with Paul Gascoigne who agonisingly missed an equally great opportunity to win the match with a golden goal. But just as had been the case six years earlier in Italy against the same opposition, England went out in the last four on penalties.

Almost as a sign of things to come, Anderton found it hard to find the net for the next two years thereafter. He scored five times in all competition for Spurs the following season, but failed to find the target in the season after, playing just 653 minutes in the Premier League in 1997/98.

The next time he did score however, it was with a bang. Facing Colombia in the final group stage match of the 1998 World Cup, England needed a win to guarantee passage into the knockout round. With 20 minutes gone, Anderton walloped the ball into the roof of the net from an acute angle. It was a stunning strike for his first goal in over a year and he could hardly have picked a better time to do so.

The next season Anderton went on to have one of his best seasons at club level, providing 13 assists in the league and winning the Worthington’s Cup after Spurs beat Leicester City in the final with a last minute Allan Nielsen goal.

It was in the FA Cup though that Anderton made his most memorable contribution. It was in the fifth round tie with Leeds United that his teammate David Ginola sparkled, bamboozling his own manager, George Graham, with a shot across the face of the goal that came crashing off the post. The Frenchman smacked another brilliant effort off the frame of the goal, before going to score a cracking volley later on.

It was Anderton, however, who opened the scoring after the Leeds defence left him in acres of space on the right. With no one closing him down, the England international fired a scud missile towards the goal, thumping into the net off the left post. “Oh, he caught that!” remarked Clive Tyldesley as its trajectory became clear.

Anderton’s ability to pull a rabbit out of the hat every now and again was splendid, but it was his creativity and assist-making that he was most known for during his time at the north London outfit. He became a paragon of intelligent passing and accurate crossing with his ability to unpick defences, providing 68 assists on top of his 37 goals in the Premier League over 12 years for the Lilywhites.

In his final few seasons with Spurs he found the net with less regularity, scoring just once in the league across the 2002/03 and 2003/04 campaigns. Fittingly his last goal for the club came against their arch-rivals, Arsenal.

The finish itself was nothing to write home about, but it was classic Anderton in a way; coming in off the wing to arrive in the box and meet the ball in the right place, at the right time. Several times in his career he caught out defences just like this.

Anderton’s time in the top flight was nearing an end, however, as he ended his long relationship with his beloved to Spurs to spend one more season in the first tier with Birmingham City, before moving on to Wolves and Bournemouth.

Spending his twilight years in the lower leagues, Anderton managed to score the first and only hat-trick of his career when he put three past Leyton Orient in 2007, showing he never lost that shooting ability or positional sense.

The Cherries were a far cry from the well run Premier League outfit they are today, suffering relegation to League Two in Anderton’s second season at the club, but he was still able to produce flashes of brilliance before retiring in 2009.

In the end, Anderton made 593 senior appearances over a 19-year long career – not bad for a player supposedly dogged by injury.