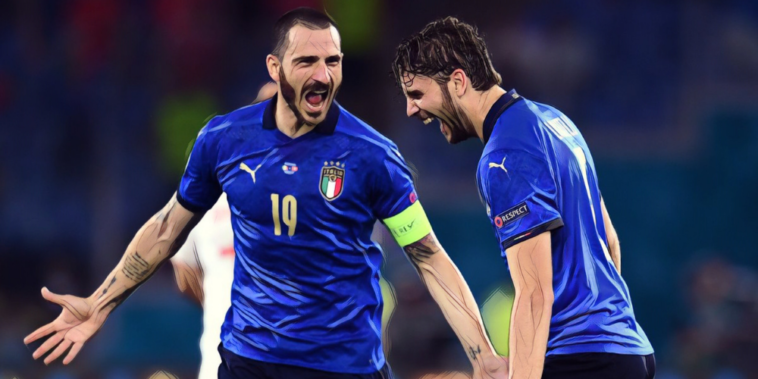 Italy have been a side transformed under the management of Roberto Mancini, with the nation’s strong start to World Cup qualification leading to a record-breaking feat.

Mancini arrived following the nation’s failure to qualify for the 2018 World Cup and has had an incredible impact upon the side, with Italy now the reigning European champions and unbeaten in 36 games across all competitions.

Italy were deserved winners of Euro 2020 after being the most impressive team throughout the tournament and the Azzurri will now be amongst the favourites to lift next summer’s World Cup following their record-breaking run of form.

Here are the longest runs without defeat in international football – penalty shoot-outs excluded.

France are the reigning world champions and their current contingent are amongst the best in Les Bleus’ history, though Didier Deschamps’ side have some way to go to match the nation’s longest unbeaten run.

Deschamps formed part of the side as a player in the mid-nineties that went 30 games unbeaten, a new side emerging following France’s failure to qualify for successive World Cups in 1990 and 1994.

France’s run began with a 1-0 win over Italy in Naples in February 1994, with Les Bleus handing debuts to a number of players who would become national team legends in the following period, including Zinedine Zidane and Lilian Thuram.

France qualified for Euro ’96 and reached the semi-finals of the tournament unbeaten, losing on penalties to the Czech Republic following a goalless draw at Old Trafford.

Their run eventually ended with a 1-0 friendly defeat to Denmark in November 1996, though their developing team continued to improve and won a maiden World Cup on home soil two years later.

Italy are now just one game short of levelling the national record, set over a four-year period some 81 years ago.

After losing 2-0 to Czechoslovakia in October 1935, the Azzurri compiled a 30-game unbeaten run, though were fortunate to see that sequence maintained after a clash with Austria was abandoned due to crowd trouble in 1937.

The Austrians were 2-0 ahead at the time of the abandonment, with just 16 minutes of the clash remaining and the result subsequently declared void.

Italy’s run included winning gold at the 1936 Olympics in Germany, in addition to World Cup success after defeating Hungary 4-2 to be crowned champions in 1938.

That latter success made it consecutive World Cup triumphs for Italy after their previous success in 1934, with their record unbeaten run coming to an end following a friendly defeat to Switzerland in November 1939.

Argentina rank third for longest unbeaten runs in international football, their side of the early nineties having amassed 31 games without defeat between 1991 and 1993.

The South Americans’ run began following defeat to West Germany in the 1990 World Cup final, with Argentina bouncing back to amass a record-breaking unbeaten sequence.

The run started with a 2-0 friendly win over Hungary and included La Albiceleste’s successes at the 1991 and 1993 editions of the Copa America, remaining unbeaten throughout both tournaments to secure consecutive triumphs.

Gabriel Batisuta led their charge across the unbeaten period with 16 goals, including a double in the 1993 Copa America final win over Mexico, the forward becoming Argentina’s record goalscorer during his international career with only Lionel Messi having since eclipsed his 54 goals.

Spanish football enjoyed a golden period during the late 2000s after decades of underachievement, a brilliant side ending La Roja’s wait for success with an unprecedented three consecutive major tournament victories.

The foundations of their all-conquering side began with a 35-game unbeaten run that started in 2007, the first fixture a 1-0 win over England at Old Trafford that saw Andres Iniesta net his first international goal.

Spain had ended the previous year poorly but remained undefeated throughout 2007 and 2008, the latter year seeing Luis Aragones’ side win the European Championship after beating Germany in the final, Fernando Torres scoring the game’s only goal.

Spain’s run continued throughout the start of 2010 World Cup qualification, though their sequence ended in shock fashion after being beaten 2-0 by the United States in the semi-finals of the 2009 Confederations Cup.

That result proved the one anomaly in a run of fixtures that otherwise included an incredible 27 wins from 28 games, with Spain proving themselves as arguably the greatest international side ever over the following years after winning the 2010 World Cup and 2012 European Championship.

Level with Spain for the longest unbeaten run in international football is Brazil, who also reached 35 games without defeat during the early nineties.

Brazil lost 2-1 to Germany in a November 1993 friendly as they prepared for the following summer’s World Cup, in what would be their last defeat as the Selecao were crowned world champions in the United States.

A side containing Dunga, Bebeto and Romario won the World Cup in unbeaten fashion, defeating Italy 3-2 on penalties following a goalless final in Pasadena.

Brazil won 10 and drew one of their following 11 fixtures after their World Cup success, and whilst defeat on penalties to Uruguay in the 1995 Copa America final was a setback, their unbeaten run in normal time extended into 1996.

Brazil’s charge was eventually halted in January 1996 – over two years after their previous loss – when Mário Zagallo’s side were beaten 2-0 by Mexico in the Gold Cup.

Their rise under Roberto Mancini has been nothing short of remarkable, having been transformed into one of world football’s most impressive sides since failing to qualify for the World Cup in 2018.

Italy’s last defeat came against Portugal during a Nations League fixture in September 2018, their run included a victorious passage to Euro 2020 success after defeating England in this summer’s final at Wembley.

Mancini has forged a team greater than the sum of its parts and a well-oiled machine have continued to gain both results and momentum, with the Italians now in a prime position to challenge in Qatar next year, as the Azzurri bid to level Brazil’s record of five World Cup successes.

Algeria is now going up. Could you please update? Thanks!!