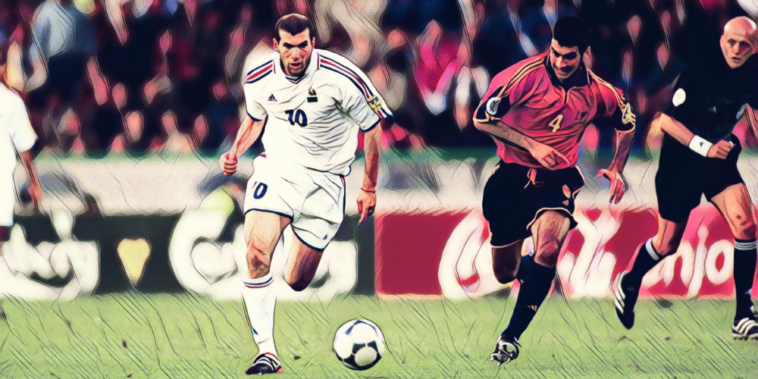 Euro 2000 remains one of the best European Championship finals in memory, a tournament which delivered a glut of goals and some stellar performances from a number of generational talents.

The Netherlands and Belgium became the first nations to co-host the event, with the former amongst the pre-tournament favourites and impressing during a free-scoring run to the semi-finals.

Portugal’s Golden Generation were another who threatened to emerge victorious before falling in the last four, the final won by France in the most dramatic of fashion as Les Bleus beat Italy with a Golden Goal winner to win back-to-back major tournaments.

It was a summer to savour for European football and we’ve decided to look back at the names to have lit up the tournament with their performances.

Here is the Euro 2000 Team of the Tournament.

Toldo spent the majority of his 28-cap international career as a back-up option for Italy, though was thrust into the number one position after Gianluigi Buffon injured his hand just eight days before the tournament.

The goalkeeper was brilliant throughout Euro 2000 as the Azzurri progressed to the latter stages on a foundation of signature defensive strength, keeping three clean sheets including shut-outs in both the quarter-finals and semi-finals.

Toldo’s tournament was defined by a heroic semi-final against the Netherlands in the last four, saving a penalty from Frank de Boer in normal time and making a string of saves to keep the game goalless.

🇳🇱🆚🇮🇹 Toldo on EURO 2000 clash: "I really had fun that night. The more they were bombarding me, the more I was pumped to make more saves. Winning at their home after 120 minutes of assault was just beautiful."@azzurri | #NationsLeague pic.twitter.com/hUrS0qihCx

Toldo then made saves from De Boer and Paul Bosvelt in the following shoot-out to book Italy’s place in the final.

Lillian Thuram was a key part of the France side that made it successive tournament successes, the right-back’s strong defending and marauding runs forward influential for Les Bleus.

Thuram established himself as one of the best defenders of his generation and played in three major finals for France, whilst he remains the nation’s most capped player after making 142 appearances at international level.

Blanc was an experienced performer at the heart of the defence in what proved his final swansong for France, retiring shortly after their success at Euro 2000 after winning 97 caps.

Blanc was incredibly named in the European Championship Team of the Tournament in three consecutive editions, having also been named amongst the best XI in 1992 and 1996 respectively, whilst he managed France during Euro 2012.

One of three Italians to feature across the backline and goalkeeping positions, Fabio Cannavaro was instrumental in the Azzurri’s progress to the Euro 2000 final.

Cannavaro formed part of a cult Parma side during the late nineties and early 2000s, before enjoying spells at Inter Milan, Juventus and Real Madrid.

His best performances – and achievements – arguably came on the international stage however, captaining Italy to World Cup success in 2006 to win the Ballon d’Or, becoming just the third defender to win the honour.

Undisputedly amongst the best defenders of all time, Paulo Maldini enjoyed a career of incredible success, though international honours alluded the former Italy captain as he formed part of the sides beaten in the 1994 World Cup final and Euro 2000.

He amassed 126 caps for Italy and led the side at the 2000 finals, producing a number of superb performances as the Azzurri progressed to the showpiece.

Maldini is arguably the greatest player in AC Milan’s history after a staggering one-club career at the San Siro, making 902 appearances across all competitions and winning seven league titles and five European Cups.

Patrick Vieira was a bit-part player in France’s World Cup triumph, but two years later had established himself as an indispensable part of Roger Lemerre’s victorious side.

Vieira had starred as a box-to-box powerhouse at Arsenal and was central to Les Bleus’ victory, featuring in every single fixture as France wrote themselves into the history books with European Championship success.

Named as the tournament’s best player following France’s success, Euro 2000 was Zinedine Zidane at the peak of his majestic powers with the midfielder producing some mesmeric performances for the winners.

Zidane was Euro 2000’s outstanding player from start to finish, with his performances against Spain in the quarter-finals and a semi-final showing against Portugal living long in the memory.

Zidane scored a spectacular free-kick against the Spanish in the last eight, before stepping up in the 118th-minute to score a Golden Goal penalty against Portugal and book France’s place in the final.

Throwback to EURO 2000 and this Zinedine Zidane clinic against Portugal. What a player, so easy on the eye. 🇫🇷🇵🇹

The immaculate close control and manipulation of the ball that made Zidane a generational great was on show throughout the summer, as opposition sides chased the shadow of France’s creative genius.

Davids was the driving force of a Dutch midfield, with the co-hosts emerging as favourites for the trophy following a strong group stage campaign – that included a win over France – and 6-1 thrashing of Yugoslavia in the quarter-finals.

The Netherlands’ dream ended in the semi-finals against Italy however, missing two penalties in normal time before spurning three more in the resulting shoot-out, the Azzurri riding their luck to eliminate a free-scoring Oranje outfit.

Davids’ performances saw him included in the tournament’s best XI however, the tenacious midfielder in the midst of a successful seven-year spell at Juventus that delivered three league title.

Luis Figo starred throughout the tournament and was named as winner of the Ballon d’Or in 2000, the winger the inspiration behind Portugal’s run to the semi-finals.

Figo scored a long-range effort against England in the group stage and was outstanding in the quarter-final win over Turkey, setting up both goals for Nuno Gomes to book a last four clash with France.

There proved no triumph for a Golden Generation of Portuguese talent despite Figo’s best efforts, though his inspirational performances persuaded Real Madrid to splash a world-record fee to sign the star from arch-rivals Barcelona that summer.

Italy’s success may have been built on stoic defending and a resilient rearguard, but the Azzurri needed moments of inspiration further forward with Francesco Totti enjoying a tournament to remember.

Totti scored just twice at Euro 2000 – in wins of co-hosts Belgium and Romania – but produced a number of superb showings with his effortless elegance shining through during the finals.

Totti scored a sublime Panenka penalty during the semi-final shoot-out win over the Netherlands and was unfortunate to be on the losing side in the final, being named as Man of the Match despite Italy’s dramatic defeat to the French.

Patrick Kluivert inspired the co-hosts to the last four of Euro 2000, the forward enjoying a prolific tournament to win the competition’s Golden Boot alongside Yugoslavia’s Savo Milošević.

Kluivert netted in group stage wins against Denmark and France, before scoring a stunning hat-trick as Yugoslavia were hit for six in the quarter-finals as the Dutch cemented their status as tournament favourites.

🇳🇱 Patrick Kluivert scored a hat-trick as the Netherlands won 6-1 to book their place in the EURO 2000 semi-finals!#OTD | @OnsOranje | @PatrickKluivert pic.twitter.com/q7jvcN7eG3

He spurned a penalty in the semi-final exit to Italy in normal time, striking the post, though it was a rare lowlight in an exceptional tournament for the Dutchman who scored 40 goals in 79 caps for the Netherlands – a record at the time of his retirement.

Do you have a biase view on thierry henry or something?. He won 3 motm in that tournament, including the final and was their top scorer and he dosent make the team of the tournament?