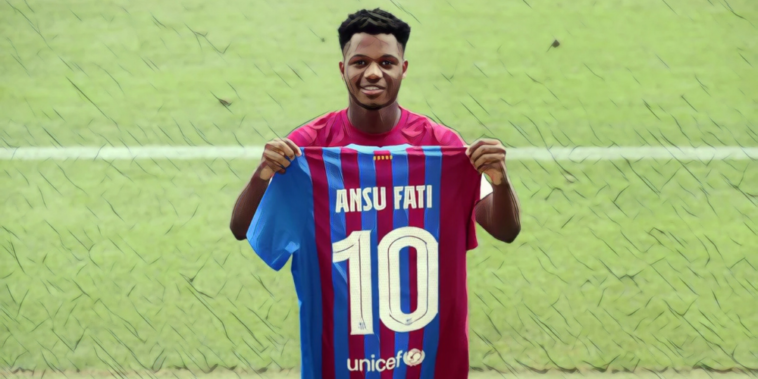 Barcelona have named Ansu Fati as the club’s new number ten, the teenager inheriting a historic shirt made famous by some of the world’s greatest players at the Camp Nou.

The shock departure of Lionel Messi to Paris Saint-Germain had left the iconic shirt vacant this summer, with the Spanish giants placing a huge show of faith in the emerging Fati, who has starred since breaking into the senior side.

Fati is regarded as one of the brightest talents in world football and the Champions League’s youngest ever goalscorer will be hoping to emulate some of his illustrious predecessors to have worn the shirt.

Barcelona have a long history when it comes to Brazilian imports, with Giovanni inheriting the number 10 shirt upon his arrival from Santos.

The attacking midfielder formed part of a new-look side in the post-Johan Cruyff era, forming a fine partnership with compatriot Ronaldo as Barcelona won a Spanish Super Cup, UEFA Cup Winners’ Cup and Copa del Rey treble during his maiden season in 1996/97.

He scored once and provided three assists in the Super Cup thrashing of Atletico Madrid, whilst a late winner against Real Madrid to edge a 3-2 thriller further endeared the creative star to the Barcelona support.

Giovanni’s second season proved his best for the club on an individual level after netting 18 goals in all competitions, but the arrival of Louis van Gaal the following season led to unrest as the Dutchman fell out with Barca’s Brazilian contingent.

His breakdown in relationship with Van Gaal later led to Giovanni branding his former manager an ‘egomaniac’ amongst other less complimentary comments, the midfielder having departed Barcelona to join Olympiakos for a fee of £10.8m in 1999, winning five league titles during a memorable period in Greece.

Giovanni’s departure saw Rivaldo swap from number 11 to 10, with the forward having been signed the previous summer following Ronaldo Nazario’s world-record departure to Inter Milan.

Rivaldo scored 28 goals in all competitions as Barcelona won a domestic double during his debut campaign, before another inspired season saw a second successive Spanish championship head to the Camp Nou.

That second campaign saw the Brazilian coronated as the best player in world football, after being named as winner of both the Ballon d’Or and FIFA World Player of the Year awards in 1999.

Barcelona failed to build on those success during a turbulent period in Catalonia, though Rivaldo remained the leading light of an inconsistent side and scored 130 goals in 235 appearances for the club across a five-year spell.

His finest individual season came after scoring 36 goals in all competitions in 2000/01, including a hat-trick against Valencia that secured Champions League qualification and is regarded by many as the greatest ever scored.

Rivaldo’s time at Barcelona largely coincided with a lull in success – either side of Cruyff’s Dream Team and a return to the summit of European football under Frank Rijkaard and later Pep Guardiola – but the Catalan club saw the very best from one of Brazilian’s all-time greats.

Iconic Performances: Rivaldo and the greatest hat-trick ever scored

Rivaldo’s falling-out with Louis van Gaal, alongside fellow Brazilians Sonny Andersen and Giovanni, saw the Brazilian great move on and join AC Milan with the club turning to another South American star to fill the creative void.

Juan Roman Riquelme had been amongst a collection of talented Argentine playmakers to have earned unhelpful comparisons to Diego Maradona, with the midfielder’s brilliant performances for Boca Juniors persuading Barcelona to secure his signature for a fee of £10m in 2002.

Riquelme had starred in his native Argentina, but his move to Barcelona proved a disaster as a combination of form and fitness issues saw him fail to make an impression.

Often shunted into a wide position which failed to utilize his qualities, he endured just one disappointing season before being loaned to Villarreal, where trusted with being the creative fulcrum of an emerging side he flourished in a central role.

He spent four seasons with Villarreal to become one of the club’s greatest players, before a second spell at Boca Juniors where he remains arguably the club’s most revered figure – a case of what might have been for Barcelona who failed to coax the best from a unique talent.

Ronaldinho had formed part of Brazil’s World Cup-winning side the previous summer and soon proved the catalyst behind Barcelona’s rise back to the summit of European football, establishing himself as the best player in world football during his time at the Camp Nou.

From elasticos to step-overs and many more tricks pulled from the magician’s hat, Ronaldinho played the game in an expressive and extravagant manner with the number ten tormenting Spanish defences.

He arrived at a Barcelona side without a trophy in four seasons, inspiring the side to back-to-back league titles and the 2006 Champions League, winning the Ballon d’Or in 2005 and FIFA World Player of the Year awards in both 2004 and 2005.

Ronaldinho’s very best was brief but his brilliance at Barcelona has left a lasting legacy, the samba superstar who became the world’s best with a signature smile upon his face.

There can be no more daunting task than inheriting the shirt number of the club’s greatest player, but that is the challenge Ansu Fati has taken on after accepting Barcelona’s number ten.

Lionel Messi’s summer exit sent shockwaves through European football, the club’s crippling financial situation leading to the separation of a footballing match made in heaven.

Messi’s promise was spotted whilst still a child as Barcelona invested in the development of the diminutive Argentine, who rose through the ranks to set unprecedented standards at the top-level of world football.

His impact on both the club and sport has been nothing short of extraordinary, becoming Barcelona’s all-time record scorer after netting 672 goals in all competitions – more than the club’s next three leading scorers combined.

Those goals have come alongside ten league titles, four Champions League trophies and a record-breaking six Ballon d’Or accolades, though the statistics only tell half the story of arguably the game’s greatest ever talent.

There are few superlatives left to described Messi when operating at his very best, his ability to do unprecedented things in the confines of a pitch having become almost routine.

His exit this summer brings an end to one of the most iconic chapters in club football history, with Fati facing a huge task to follow in Messi’s legendary footsteps.

Read – End of an era: Paying homage to Messi’s remarkable stats at Barcelona