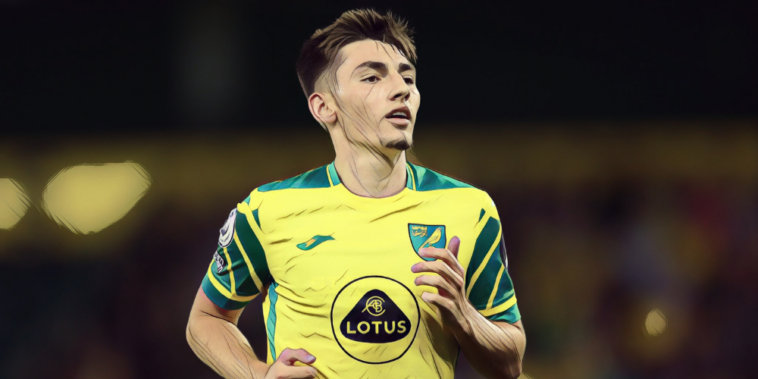 Premier League clubs once again spent big during the summer transfer window, but the loan system can often provide sides with a cost-efficient method of strengthening their squad.

Loan signings can be used to gain players experience or get unwanted assets off the books, with a host of Premier League sides having sanctioned temporary departures in moves they will hope prove beneficial for all parties involved.

We’ve picked out some of the most notable names out on loan this season, here is a best XI from the players loaned out by Premier League clubs this summer.

Gavin Bazunu was thrust into senior football as a 16-year-old at Shamrock Rovers, his early impression persuading Manchester City to spend £420,000 to prise the promising shot-stopper away from Ireland.

Last season saw the teenager impress on loan at Rochdale, before signing for Portsmouth ahead of the 2021/22 season where he will hope to help the side to promotion from League One.

Bazuni has already earned five senior caps for the Republic of Ireland senior side and made headlines after saving a Cristiano Ronaldo penalty during this month’s international break.

Hector Bellerin’s decade spell at Arsenal has come to an end this season with a loan move to Real Betis, the full-back having informed the north Londoners of his desire for a new challenge.

Bellerin impressed after breaking into the side as a teenager and was named in the PFA Team of the Year during the 2015/16 season, but his career at the club has stagnated amid injury issues and a turbulent period for the Gunners.

Still just 26, he will hope a return to his native Spain can kick-start his fortunes and the four-cap international departs having made 239 appearances in all competitions for Arsenal.

William Saliba is now in his third consecutive loan spell away from Arsenal, having failed to make a senior appearance for the club since a highly-anticipated £27m move from Saint-Etienne.

The 20-year-old made 22 appearances in all competitions for Nice last season, before linking up with Marseille for the current campaign where the Gunners will hope exposure to Ligue 1 and Europa League football can aid his development.

Signed as one for the future despite his significant price-tag, Arsenal will hope Saliba – who has started each of Marseille’s first three league games – can return to the Emirates an improved player with their current centre-back options having struggled in recent weeks.

Manchester United’s signing of Raphael Varane has paved the way for Axel Tuanzebe’s loan exit, the defender signing for Aston Villa despite interest from Newcastle.

Tuanzebe returns to Villa Park after two previous loan spells with the Birmingham side during their time in the Championship, forming part of the team that won promotion in 2018/19.

Villa have since consolidated in the top tier and the 23-year-old will be hoping to break up the partnership of Tyrone Mings and Ezri Konsa this season, as he seeks a run of games to establish himself as a centre-back of Premier League quality.

Chelsea have allowed European Championship-winning left-back Emerson Palmieri to leave for pastures new this season, the Italy international having struggled to win favour ahead of Ben Chilwell and Marcos Alonso.

Emerson formed part of the Azzurri side that were crowned winners of Euro 2020 this summer and has joined Lyon on a season-long loan deal.

The 27-year-old’s move will provide him with regular minutes, having made just 23 league starts since signing for Chelsea from Roma three-and-a-half years ago.

Arsenal’s attempted rebuild has seen a mass exodus of unwanted assets, with Lucas Torreira once again shipped out on loan after being informed he is not part of Mikel Arteta’s plans.

Torreira spent last season on loan at Atletico Madrid and won the Spanish league title, but made only three league starts in a frustrating period and was not retained by the La Liga champions.

The Uruguay international has now returned to Italy after joining Fiorentina on loan for the 2021/22 campaign, having moved to Arsenal from Sampdoria in 2018.

The deal for the 25-year-old includes an option to make the move permanent for a fee of £13m.

Matteo Guendouzi was a regular in the Arsenal side during Unai Emery’s time in charge, but soon fell out of favour under Mikel Arteta who raised concerns about the midfielder’s attitude and temperament.

Guendouzi spent last season on loan at Hertha Berlin before a move to Marseille this summer, where he has linked up with fellow Arsenal player William Saliba at the Stade Vélodrome.

The 22-year-old has impressed in his opening appearances for Marseille to earn a call-up to the France squad for World Cup qualifiers against Bosnia, Ukraine and Finland, and the Ligue 1 side have an option to make the move permanent.

Chelsea boast one of the most talented midfields in world football right now, with the addition of Saul Niguez from Atletico Madrid further adding to an embarrassment of riches for Thomas Tuchel.

The west London side’s depth has allowed Billy Gilmour to move on loan in search of minutes, joining Norwich on a season-long deal in a switch that Chelsea will hope can accelerate his development.

The Scotland international is one of the brightest prospects in the Premier League and has shown in his fledgling career already the potential he possesses, his arrival at Carrow Road a major coup for the Canaries.

Reiss Nelson’s career has failed to take off as expected at Arsenal, with the winger finding himself on the fringes of Mikel Arteta’s plans.

Nelson enjoyed an impressive loan at Hoffenheim during the 2018/19 season before returning to feature in Unai Emery’s squad, but his options have been limited since Arteta’s arrival with the 21-year-old making just two substitute appearances in the Premier League last season.

Feyenoord have offered the youngster an opportunity to feature regularly this season, having seen a move for Manchester United’s Amad Diallo collapse due to an injury.

Michy Batshuayi has almost as many loan moves (5) as league goals for Chelsea (8), with the forward’s existence having been a nomadic one since arriving into the Premier League in 2016.

Batshuayi has enjoyed mixed fortunes during loans at Borussia Dortmund, Valencia and two separate spells with Crystal Palace, before packing his bags once more to sign for Besiktas this summer.

His lack of a settled surrounding has seen the 27-year-old’s career stall, but a record of 22 goals in 35 appearances for Belgium at international level indicates his quality.

Batshuayi signed a contract extension with Chelsea before his move to Turkey to protect his value, but now is the time for the forward to find a home after bouncing round a succession of clubs.

Moise Kean has returned to Juventus this summer on a season-long loan deal from Everton, re-joining the Italian side who have an obligation to buy the forward for a fee of £24m in the summer of 2023.

Kean returns to Turin two seasons after making the move to Merseyside, with the 21-year-old failing to make an impact after scoring just two goals during a disappointing debut 2019/20 season.

He spent last season on loan at Paris Saint-Germain and impressed to score 17 goals in all competitions, though the Ligue 1 side failed to make the move permanent after pursuing a move for Lionel Messi.

Kean will now hope to settle at Juventus, where he scored eight goals in just 21 appearances before signing for Everton in 2019.