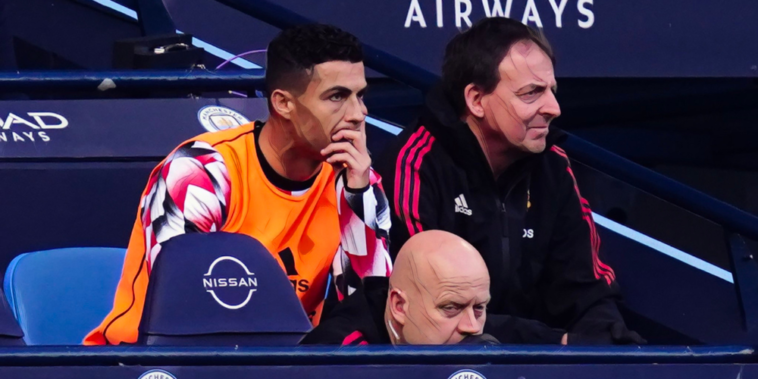 Erik ten Hag has elaborated on his decision to leave Cristiano Ronaldo on the bench during Manchester United’s derby defeat at Manchester City last weekend.

Ronaldo remained an unused substitute as United were thrashed 6-3 at the Premier League champions on Sunday, with the Red Devils four goals down at half-time in a one-sided Manchester derby.

Ronaldo’s future dominated the headlines post-match, though Ten Hag justified his decision by declaring it a mark of respect to the five-time Ballon d’Or winner given how events unfolded at the Etihad.

Speaking ahead of the Red Devil’s Europa League clash at Omonia Nicosia, the Dutchman reiterated his stance that Ronaldo’s omission was decided ‘out of respect’ to the forward.

“When we’re 4-0 down or 6-1 down [against Manchester City], I said I didn’t bring him [Cristiano Ronaldo] on out of respect. That has no connection with his future at the club,” Ten Hag told his pre-match press conference.

“I don’t see he is unhappy, he is training well and enjoying being here.”

“Of course, he wants to play, he’s unhappy when he’s not playing. But I already said and I have to repeat, he’s training well, he has a good mood, he’s motivated and he gives his best, that is what we expect.”

The defeat at Manchester City ended a four-game winning run for United in the Premier League and Ten Hag admits the manner of the loss was a reality check for his transitional team.

“Obviously it was a difficult game [defeat to Manchester City] and as always, we analysed it. It was a reality check, we have to learn from it and carry on.”