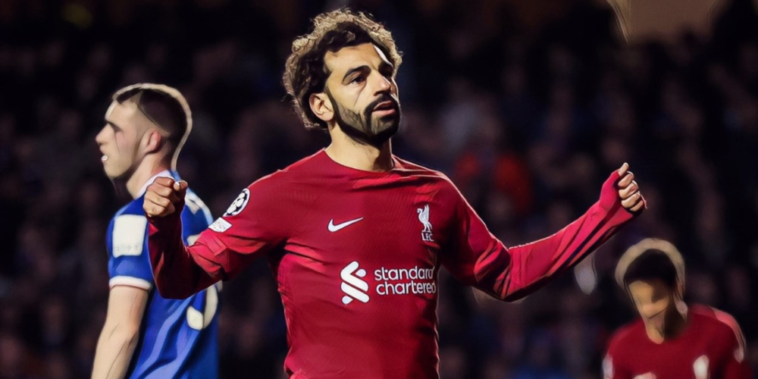 Mohamed Salah has set another goalscoring record after netting a Champions League hat-trick for Liverpool against Rangers.

Salah’s treble off the bench was the competition’s fastest ever hat-trick and also saw the Egyptian international move clear for the most goals scored in the Champions League for an English side.

Here are the players with the most Champions League goals scored for English clubs.

Wayne Rooney netted 30 goals in Europe’s premier club competition for Manchester United, with the forward having been a key performer in a Red Devils side that reached three finals between 2008 and 2011.

Rooney memorably scored a hat-trick on his Champions League debut for the club against Fenerbahce, as the teenager produced a scintillating showing following his arrival from Everton.

Rooney formed part of the side that won the 2008 Champions League after beating Chelsea in the first ever all-Premier League final, whilst he also netted in a losing effort as United were beaten by Barcelona in the showpiece three seasons later.

The former England captain is the leading English goalscorer in the competition’s history, his 30 goals more than Paul Scholes (24) and Frank Lampard (23).

Thierry Henry scored 35 goals in the Champions League during a glittering career at Arsenal, part of a haul of 228 he scored for the Gunners to become the club’s all-time record goalscorer.

Amongst Henry’s greatest European performances for the north Londoners include a scintillating hat-trick away at Roma in 2002, whilst he also tormented Italian opposition with a sublime two-goal showing as Inter Milan were beaten 5-1 at the San Siro the following season.

The ultimate success eluded Henry during his time with Arsenal, with defeat to Barcelona in the 2006 final the closest the French forward came to winning the competition with the Gunners.

He moved on to Barcelona in 2007 and won the Champions League under Pep Guardiola during the 2008/09 campaign. Henry finished his career with 50 goals in 112 appearances in the competition – the eighth-highest figure of any player.

Ruud van Nistelrooy was a goalscoring machine on the Champions League stage at Manchester United, with the forward arguably the competition’s finest finisher during a prolific five-year spell at Old Trafford.

Van Nistelrooy signed for the Red Devils from PSV Eindhoven in 2001 and became an instant hit following his move to the Premier League, as he scored 36 goals in all competitions to be named as the PFA Player of the Season.

🗣️ Sir Alex Ferguson: "Without doubt the best finisher we have ever had [at Manchester United]."

The Dutch forward finished as the Champions League’s leading scorer during that debut campaign, before repeating the feat the following season as part of a Premier League joint-record of 44 goals scored in a single campaign.

Van Nistelrooy finished as the Champions League’s top scorer a third time in 2004/05 and departed English football having scored 35 goals in just 43 games in the competition for United.

Manchester City’s all-time record goalscorer, Sergio Aguero netted 260 goals for the Citizens during a decade of success at the Etihad.

The Argentina international was one of the key signings that aided City’s transformation into a superpower of English football, winning five league titles amongst a wealth of major honours at the club.

He scored 36 goals for City in the Champions League, though defeat to Chelsea in the 2021 final was the closest Aguero came to winning the competition before a transfer to Barcelona.

Perhaps his finest moment came during a thrilling 3-2 victory over Bayern Munich in 2014, in which the forward scored a hat-trick – including two in the final five minutes to turn defeat into victory – as City secured a dramatic win against the Bundesliga giants.

Didier Drogba previously shared the record with Aguero for the most Champions League goals scored for an English club, having scored 36 times in the tournament across two spells at Chelsea.

Drogba was often the man for the biggest occasion for Chelsea, including a starring performance as the west Londoners defeated Bayern Munich to win the Champions League for the first time in 2012.

The Ivorian scored a dramatic late equaliser against the German giants, before scoring the decisive kick in the shoot-out as the Blues’ caused an upset at Bayern’s own Allianz Arena.

Drogba’s overall record in the Champions League stands at 44 goals from 92 appearances, the forward sandwiched between Alessandro del Piero (42) and Filippo Inzaghi (46) among the all-time leading scorers.

In addition to his 36 goals for Chelsea, he also scored eight times in the competition during spells at Marseille and Galatasaray.

Salah’s hat-trick against Rangers saw him move to 38 goals for an English side, having eclipsed Steven Gerrard’s club-record for Liverpool in the competition proper during a group stage game against Midtjylland in 2020.

The Egyptian has set all manner of records tumbling since moving to Merseyside, having netted 164 goals in just 267 appearances for the Reds.

That haul includes three Premier League Golden Boots, with only Thierry Henry (4), Alan Shearer (3) and Harry Kane (3) having ever matched that feat.

Salah scored 10 goals as Liverpool finished as Champions League runners-up in 2018, before playing an integral role as Jurgen Klopp’s side returned to the final the following season – scoring from the spot as Tottenham were beaten in Madrid to claim the Reds’ sixth European crown.

He has now scored 41 goals in the Champions League (38 – Liverpool, 2 – Basel, 1 – Roma) and is 18th among the all-time top goalscorers in the competition. Only Didier Drogba (44) has scored more among African players.

Goo Salah! You deserve it this time