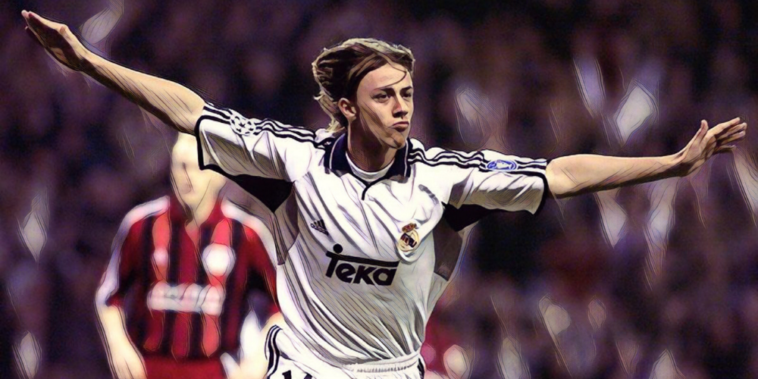 It’s fair to say you don’t spend over two decades of association with world football’s biggest club without talent and in José María Gutiérrez Hernández, Real Madrid had a player bursting at the seams with ability.

Our latest series profiles some of the best midfield magicians the game has seen, footballers who oozed creative class and possessed an ability to conjure moments others could not even imagine.

Better known as ‘Guti’ to most football fans, the Spaniard was a footballer who often appeared to play by his own rule book – both in the confines of the pitch and during an occasional rock and roll lifestyle away from it.

He rose through the ranks before making his debut for Los Blancos as a teenager, a home-grown hope whose flashes of brilliance rose expectations that – despite huge success – for some were never fully met.

Guti was an enigma of a footballer, one labelled by former Real Madrid president Ramon Calderon as the ‘eternal promise’ even as he reached the latter stages of his Bernabeu career.

This was a footballer capable of the unexpected and unimaginable, but who failed to truly produce his best on a consistent basis and remained a divisive figure amongst the club’s ever-demanding support.

For the dreamers he was a talent who captured the imagination, though for others his lack of application, tempestuous personality, and mercurial nature diminished his status and perhaps prevented Guti from reaching the status of the Galacticos he rubbed shoulders with in the Spanish capital.

After breaking into the side in the mid-nineties, his pathway to a prominent role was blocked by the arrival of Clarence Seedorf, whilst Florentino Perez’s famed Galactico transfer policy later provided a further stumbling block to his chances of superstardom.

Guti’s most productive campaign came during the 2000/01 season as he was tasked with deputising for the injured Fernando Morientes further forward, scoring 18 goals across all competitions as a 28th league title was delivered to the Bernabeu.

There are goals…and then there are GOLAZOS! 😱

Zinedine Zidane arrived in a world record transfer deal at the conclusion of that campaign, before fellow Ballon d’Or winner Ronaldo signed from Inter Milan the following season – the high-profile purchases leaving Guti facing a fight against a who’s who of the world’s finest footballers to find himself a defined role in the side.

He dropped deeper to accommodate an embarrassment of attacking riches, where his imagination and vision shone through as he dismembered defensive lines with purposeful and penetrative passing.

Great players are often remembered for spectacular moments that define their career, microcosms of their talent that ensures younger generations are well-versed in the past exploits of notable names.

For Guti, his are a sumptuous pair of assists that perfectly showcased the extraordinary talent he occasionally allowed to explode in the colours of Real Madrid.

The first came during the 2005/06 season against Sevilla, a side for whom the midfielder often saved his best, with this moment of ingenuity catching even his own teammates off-guard.

A half-cleared ball finds it way to the Spaniard just outside of the Sevilla penalty area, as the opposition’s defensive line pushes out to close down the space ahead of him.

After an initial touch takes him away from goal, Guti fires the ball back into the danger area with his heel, removing four Sevilla defenders from the equation and finding the feet of a surprised Zidane as he drifted his way back onside.

The Frenchman does the rest, firing home as part of a second-half hat-trick, to seal three points for Real Madrid and add a huge highlight onto Guti’s reel of improbable assists.

If the midfielder’s astonishing assist against the Andalusians proved one that would live long in the memory, it is this moment of creative genius that immortalised Guti as the extravagant enigma he came to be.

Deportivo La Coruna had been a far from happy hunting ground for the capital giants, the long trip to north-western Spain having delivered no wins in the past 19 seasons for Real Madrid ahead of their 2010 visit.

Such was their misfortune away in Galicia – an area of superstition, ritual, myth and legend – the pre-game talk surrounded the ‘curse’ of the Riazor, as Real went in search of a first away win at the ground since the 1991/92 campaign.

The talk post-match, however, was another story entirely.

Guti’s gift from the heavens, later referenced as ‘the heel of God’, had helped break the spell, a moment that even when replayed over a decade later leaves no shortage of wonder.

Guti – now jostling for status amongst a second wave of Galacticos – is threaded through on goal with Real leading through Esteban Granero’s early header, providing the midfielder with the chance to fire home and put the capital club on course for a drought-breaking win at Deportivo.

With just the goalkeeper to beat a goal seemed a formality, and so it proved, though not how any other person inside the Riazor had imagined as Guti once again failed to conform to conventions.

The goal at his mercy, Guti steps over the rolling ball and back-heels it, leaving the confused goalkeeper on the turf and allowing Karim Benzema the simplest of finishes into an open goal.

11 years on, we still can't believe @GUTY14HAZ actually did this… 😱#OnThisDay pic.twitter.com/Xx5OozoTti

For all the talk of spells and witchcraft, it was Real’s own wizard who helped provide an advantage the visitiors would not relinquish.

Amongst his finest showings was another clash against Sevilla, when introduced as a substitute with Real trailing at half-time he helped turn defeat into victory, involved in all three goals in a 3-1 win, including two brilliant assists.

It was these flickers of brilliance that are why Guti remains so fondly remembered and there remains something so ever endearing about players with raw potential who ultimately fail to maximise their gifts.

Guti was capped on just 13 occasions by Spain across a six-year international career, an inconceivably low total for a player with his natural ability.

He was an exquisite passer of a football, threading balls through to some of the game’s greats, though his dismay at often accommodating star signings was just one of the factors that contributed to the sense of a talent unfulfilled.

One of the best passers of the ball EVER. 🙇‍♂️

Even if his considerable ceiling was not quite reached, it is important not to dwell on Guti as a hard-luck story of a player whose career came to be wasted.

Yes, his work-ethic left much to be desired and both his vanity and love of a celebrity lifestyle were no secret, but in our eyes footballers should be appreciated for what they are – and not what they aren’t.

This is a footballer who amassed 542 appearances for Real Madrid and who counts five league titles and three Champions League trophies amongst his honours – a collection of accolades most players can only dream of.

That those statistics have only come to be mentioned now is perhaps both poignant and fitting, in an era where numbers are crunched and comparisons made between footballers based on tangible success, it’s worth remembering what the game is really about.

It is the moments that prove impossible to forget, pieces of brilliance that ensure jaws drop and eyes widen.

Guti – for all his faults and flaws – produced those in abundance and for that the Spanish schemer should always be cherished.