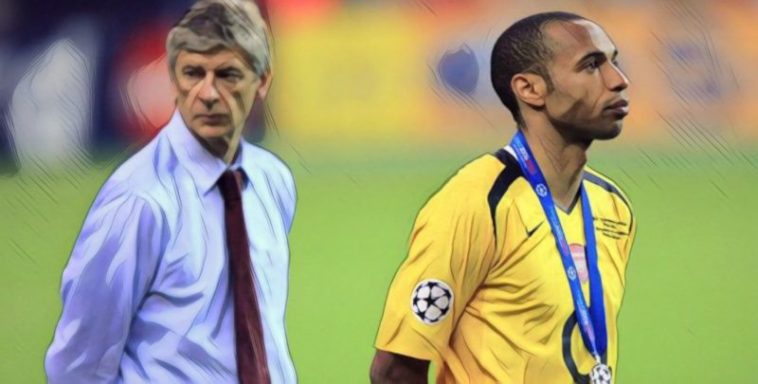 In 2002, Arsene Wenger told L’Equipe “I can’t imagine finishing my life without winning the European Cup”.

His Arsenal side at that time was among the elite in Europe for the best part of a decade, so why couldn’t they fulfill his dream?

Most squads fail to make an impact when they start in European football’s highest level competition, but by the early 2000s Arsenal had a seasoned squad, rife with quality, and with the experience of European finals under their belt.

In the very season that Arsene Wenger’s famous quote was delivered, they went out in the second group stage to a Deportivo La Coruña who finished 2nd in La Liga, ahead of Barcelona and Real Madrid, and soon to be Italian champions Juventus.

A team with the perfect combination of old-school, rigid defence and modern forward players brimmed with flair should have been able to achieve a Champions League semi-final by then.

Despite continuing to play stunning football and compete for the major trophies domestically, Arsenal disappointed in the second group stage again in 2002/03, winning one of six games to finish third in their group of Valencia, Roma, and Ajax.

The 2003/04 season was their outstanding opportunity to lift ‘big ears’.

Wenger’s side became the only side in Premier League history to go unbeaten throughout a season, with an incredible squad boasting Henry, Pires, and Bergkamp in their prime to name but a few.

The team is remembered for the offensive brilliance of such players, but the intelligent central midfield workhorses: Viera and Gilberto provided a solid base for these maestros to operate.

Although this team was entertaining, it played a lot of counter-attacking football and won many games through defensive determination.

It seemed inevitable that this team would be crowned European champions before it dispersed.

Arsenal was finally replicating their domestic form in Europe, topping their group winning 5-1 at the San Siro along the way.

They then avoided the dreaded second group stage, as the competition had just begun to operate in its current format, and comfortably defeated Celta Vigo 5-2 on aggregate.

A golden opportunity to enter a final four with Monaco, Porto, and Deportivo appeared for Arsenal, Wenger’s side drawn against Claudio Ranieri’s Chelsea in the quarter-final. After a 1-1 draw at Stamford Bridge, Arsenal were 1-0 at half time at home to the team they would finish 11 points ahead of in the Premier League.

The second half saw The Gunners blow their lead, and miss an opportunity to go down in history as one of the great European sides. This was unlike the rigid, experienced team described above.

Chelsea had lost this London derby in their home and away Premier League fixtures 2-1. In these tight encounters, The Gunners showed grit and experience to find a way to win. When it mattered most in Europe, they couldn’t replicate these traits, losing their lead through two soft goals.

In the 2004/05 campaign, Arsenal had begun to decline domestically and was beaten in a tight affair in the early knockout stages by Bayern Munich. In 2005/06, fortunes changed for them.

With the departure of club legend Patrick Vieira and an ageing core of the squad, Arsenal had not been touted by many to achieve a historic European trophy. A declining team could have done with the big names that would likely have been attracted to them, as European champions.

Yet the North London giant’s demeanour had completely changed in Europe. After comfortably topping their group, they knocked out European giants Real Madrid, Juventus, and Villareal on their way to a Paris final, without conceding a goal.

This was the first time Arsenal had shown Europe what their team was really about. Their defensive concentration and organisation meant they could bully and dominate these European giants, and rarely look in danger of conceding.

Despite an early red card for Jens Lehmann, Arsenal began the final brightly, going 1-0 up against Barcelona via Sol Campbell’s header. Having kept a clean sheet in every knockout game in the competition, they were looking comfortable, despite Samuel Eto’o hitting the post.

In the second half, Henrik Larsson’s introduction helped sway the game in Barcelona’s favour, and their pressure told, as 10-man Arsenal conceded a late equaliser and winner, losing 2-1.

During this run is where Wenger’s men had truly stood up and showcased their quality to their European rivals, some fortune was needed at the very end. Most European champions experience some along the journey.

Perhaps a rejuvenated side with fresh faces could have seen Wenger compete with Arsenal in Europe again, however, the Frenchman placed faith in the young players in his squad, saying “We will be back of course…We have plenty of good young players behind this team”. Unfortunately for the club, they didn’t.

In the coming seasons, the club’s top players left for clubs likely to achieve more, and Wenger’s faith in youth and panache was not repaid. The financial implications of the move to the Emirates stadium suggest this faith was forced, but the incapability to replicate such performances in Europe and England eventually cost the club legend his job.

Theirry Henry’s face at full-time told the whole story. The stars of the ‘Invincibles’ had aged, with the likes of Barcelona, Chelsea and Manchester United growing in Europe, this was their chance to make history.

They really should have.

Read Also – Teams that should have won the Champions League: Early 2000’s Valencia