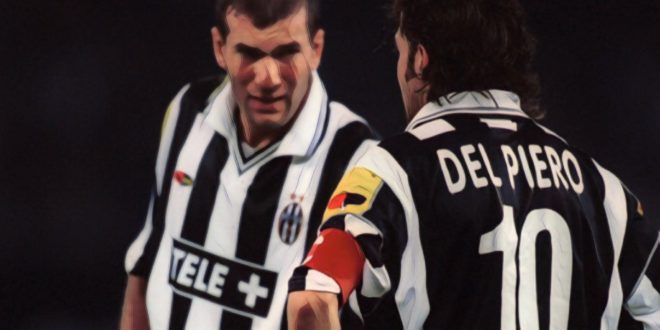 Teams that should have won the Champions League: Late 90’s Juventus

On the 22nd of May 1996, Vladimir Jugović slotted ‘that’ decisive penalty past Edwin Van Der Sar and Juventus beat Ajax to win their first ‘real’ European cup.

What should be looked back on as the most joyous occasion in supporting Juve for Bianconeri faithful, is now seen as the spark of their long run of being nearly-men in Europe.

Widespread accusations of PED use years after the final damages the ‘realness’ of this victory. Since then, the Italian giants have failed to win a Champions League, falling at the final hurdle five times.

As Marcelo Lippi improved his team in the summer of ‘96 to become ‘the benchmark’, how did the side widely recognised as the best in Europe fail to prove it by winning a Champions League?

Soon to be club legend Allesandro Del Piero was emerging, but the significant change to this team came in midfield, as Juventus had just signed Zinedine Zidane.

The French maestro became the unplayable master in midfield that dominated world football that season. Initially struggling in a defensive midfield role, Lippi pushed him not only further up the field but also physically to new levels during the 1996-97 campaign, and he began to show the world his true capabilities.

“Lippi was like a light switch for me, he switched me on and I understood what it meant to work for something that mattered.” – Zidane said on growing at Juventus

Zidane began to shine for the Old Lady in the second half of this season, as they marched on to win their third Scudetto in a row, as well as the European super cup and Intercontinental cup.

The mostly Italian, solid back four of this team was protected by Zidane’s French teammate Didier Deschamps, who was surrounded by midfield workhorses Angelo Di Livio and Vladimir Jugović, giving Zizou freedom at the tip of the diamond to combine with the quick, prolific partnership of Vieri and Bokšić.

Juve had continued to thrive in Europe, comfortably topping their group which included Manchester United, before strolling past Rosenborg.

They then faced their European finalist opponent of 1996 in the next round, Ajax. After drawing 1-1 in normal time in a well-contested showpiece event, these fixtures would show if Lippi had successfully managed to improve his European champions.

His side passed this test with flying colours, as they won comfortably home and away, with Zidane shining in a 4-1 rout at the Stadio Delle Alpi, to win 6-2 on aggregate.

By blitzing their seemingly greatest challengers, the Italian and European champions made themselves huge favourites to lift old big ears by beating Borussia Dortmund, who had rode their luck against Man United in the semi-finals. Many of Dortmund’s key players had been discarded by Juventus in recent years.

Recent fixtures between the two sides had shown that Juve had the power, panache, and speed to overcome this Dortmund team. All they had to do was show up.

Dortmund scored two goals from corners which were uncharacteristic of the Turin side. A brilliant team goal finished by Del Piero delivered hope of a comeback, for about 6 minutes. However, more sloppy defending gave substitute Lars Ricken the opportunity to masterfully lob Peruzzi, ten seconds into his appearance.

A lack of decisive performances from the key players of this phenomenal squad meant Juve had let themselves down on the big stage. Lippi’s answer to this was to reshuffle his team again.

Strike partners Vieri and Boksic were sold to Atletico Madrid and Lazio respectively. Del Piero had grown in stature and was trusted to be the main partner of new big-money signing Filipo Inzaghi, while 18-year-old Marcelo Zalayeta came in to take Del Piero’s place on the bench.

Their forward line was looking stronger, but the midfield was where the biggest improvement came, as Juve landed AC Milan star Edgar Davids and highly-rated Napoli midfielder Fabio Pecchia to assert their dominance in Italy and right the previous year’s wrong in Europe.

The change in personnel was part of a change in playing style for Lippi’s men. There was a more attacking emphasis from his side, and the general formation of the team shifted to a 3-5-2.

The brilliance of their forwards made up for the more regular leaks in their defence during the 1997-98 campaign. Their defensive instability showed particularly in Europe, as they lost 3-2 to Man United and 2-0 to Feyenoord to scrape through to the quarter-finals of the Champions League with 12 points.

The class of the team showed throughout the campaign, as they won another Scudetto, and progressed against Dynamo Kyiv in the Champions League quarter-final. Thanks to Zidane, Del Piero, and Inzaghi’s genius, The Old Lady managed to reach another Champions League final, despite conceding four times in a 6-4 aggregate win against a much weaker Monaco side.

Real Madrid was the final hurdle, as Juventus were heavy favourites once again to become champions of Europe. This mediocre Madrid side had finished fourth in La Liga and was struggling to score goals. Juventus were rated as the far superior outfit, all they had to do was prove the pundits right.

Once again, they didn’t.

The exceptional combinations of the world-class Juve front three did not appear often, as Deschamps and Davids had the Turin side’s most memorable chances. Madrid shut Juventus out, eventually scoring on the break in the second half, to end their 32-year drought in the Champions League.

Again Lippi’s side had not done themselves justice on the big stage, and again he turned to the transfer market. Without any significant departures, a young Thierry Henry was signed from Monaco.

With world cup heroes Zinedine Zidane and Didier Deschamps returning to Turin in stunning form, The Old Lady was tipped to challenge on all fronts again.

After a mediocre start to the season, November hit Juve hard. Allesandro Del Piero and Zinedine Zidane were injured, leaving an already underperforming team short of their key attacking players.

Deschamps appeared burned out, Henry was not meeting the required standard. There were issues all over this team, and they struggled through the Champions League group stage, drawing 5 of their 6 group games.

Marcello Lippi was not able to guide his team to reproduce the brilliant attacking football of previous seasons and announced his intention to leave and manage Inter Milan in December.

Lippi’s side had won only one game in the new year by February 7th, when he stormed into a press conference announcing his immediate resignation.

“I have decided to resign. If I am the problem, if the problem is linked to my December announcement about my future, then I’ll say good day to you and leave.” – Lippi told the media.

Carlo Ancelotti took over from Lippi and successfully steadied the ship. Juve progressed to the semi-finals of the Champions League and had lost only once since his appointment when old foes Man United came to Turin.

We all know what happened then.

After an impressive performance in the 1-1 draw at Old Trafford, two early Filipe Inzaghi goals meant anything but Juventus progressing to their fourth Champions League final in a row seemed impossible. They simply did not lose two-goal leads at home.

On the big stage, they simply let themselves down again.

This great team dispersed over seasons afterwards, with near misses for many of this iconic squad’s players in 2003 when Lippi had returned and future Bianconeri sides in 2015 & 2017.

All since that decisive penalty.