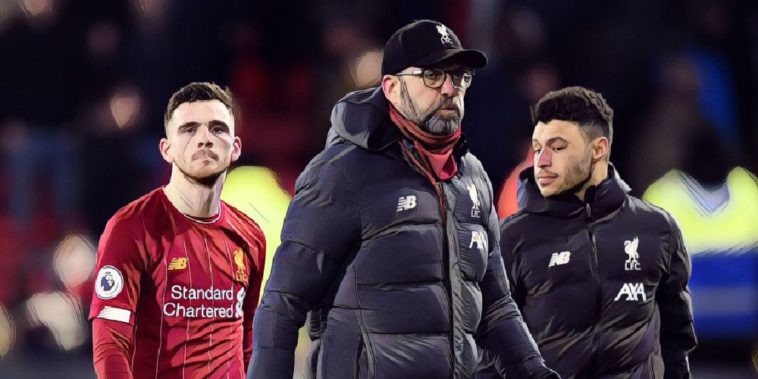 Liverpool’s imperious form took a few notable hits in the last few weeks. A loss to Chelsea in the FA Cup – albeit with a weakened starting eleven – was an uncharacteristic display, muddled with individual errors and a lack of the collective drive and relentlessness that have characterized Jurgen Klopp’s side.

Yet perhaps the more notable losses were to Atletico Madrid in the Champions League round of 16 and a 3-0 defeat to Watford in the Premier League. Both had intriguing tactical setups that for the first time this season ruthlessly exposed Liverpool’s weaknesses.

Against Atletico Madrid, Liverpool encountered a team and coach who over two legs, displayed the purest distillation of their footballing identity. Diego Simeone wholly embraced the plight of facing the European champions in a way only he can, drawing on the tactical and emotional principles that are held sacred to him.

The vertically compact and horizontally narrow 4-4-2 he set his team up in brilliantly congested the centre of the pitch and forced the Reds to channel their play out wide. For all the quality of Andrew Robertson and Trent Alexander-Arnold, they could do little to penetrate the Atletico defence, as the two banks of four seamlessly shifted from one side to the other in order to compress the space out wide and win back the ball. Even if a cross was delivered, the aerial ability of the centre-backs and the excellence of Jan Oblak in goal presented a daunting attacking task for the Liverpool attack.

Simeone also instructed his forwards to press the Reds central defenders aggressively in the first-half of the first leg, a ploy he does not usually use but indicated his desire to maximize counterattacking opportunities and stifle the Liverpool buildup. The result was a 1-0 victory and an invaluable advantage to take to Anfield.

Both managers made alterations in the second leg. Klopp encouraged more horizontal switches of play, instructed Georgino Wjanldum to push higher and slightly wider on the left to afford Robertson more space and allowed Roberto Firmino to make more runs out wide to give Liverpool an extra man in the half and wide spaces.

Simeone did away with the periodic high press he implemented in the first leg and instructed his side to remain in a low block for the duration of the match, ceding even more possession for the sake of greater compactness in the defensive shape. The result was a dominant display from Liverpool, who were relentless in their control of possession, creation of chances, and counter-pressing. Atletico were pinned back to the extent that their counterattacking opportunities were significantly hampered, and they were somewhat dependent on the awe-inspiring performance of Oblak and wasteful finishing from Liverpool.

Yet Simeone deserves immense credit. In extra time, he more assertively instructed his forwards or onrushing midfielders to attack the space behind the Liverpool fullbacks. Perhaps more importantly, his substitutions maintained the La Liga sides energy levels and ended up winning him the game, as Marcos Llorente and Alvaro Morata scored the three goals that would guarantee Atletico’s progression.

That Llorente would score twice to effectively end the game was particularly fitting. The Spaniard is the prototypical Simeone player. A physical specimen. A tireless worker. A man who plays with a chip on his shoulder and that extra bit of aggression as a result. Purchasing and acquiring players with such physical and mental resilience is as much of Simeone’s managerial approach as his theatrical outbursts on the touchline or astute tactics.

Atletico’s win was undoubtedly a result of specific strategies: the congestion of central space, attacking the space behind the Liverpool fullbacks on the counter, pressing in wide areas, and shifting across to compress space. Yet it was also the result of a plethora of intangibles. Mentality. Commitment. Desire. All can be pejorative platitudes, but all can also be decisive attributes. Atletico Madrid’s embodiment of such qualities was instrumental for the successful execution of their tactical instructions.

Watford’s victory over Liverpool was obviously more surprising by virtue of their league standing. Their approach was tactically interesting and implemented to perfection, a testament to the commendable work of the often derided Nigel Pearson.

The Hornets set up in a 4-4-1-1 low block which sometimes shifted to a 4-5-1. Unlike Atletico Madrid, Troy Deeney provided the centre-backs with ample space and instead looked to close down Fabinho. This both prevented the Brazilian from setting the tempo of the Liverpool buildup and left Abdoulaye Doucoure in a free role, enabling him to drop into the two banks of four to bulk the midfield or loiter in space for the Watford counter. By using Doucoure in this way, Pearson ensured that Watford constantly enjoyed numerical superiority in the centre, even when Roberto Firmino dropped into midfield. Just like Atletico, they blocked the centre of the pitch and forced Liverpool to play wide.

Gerard Deulofeu and Ismaila Sarr were instructed to man-mark the Liverpool fullbacks to deny them space, retreating deep into their half and occasionally giving Watford something of a back six. Both wingers also had to emerge from deep defensive positions in order to attack the space behind the Liverpool fullbacks, a role that demanded tremendous energy and discipline. Watford created numerous chances in the first half through Deulofeu, but it would be Sarr and Deeney who would steal the headlines with three goals between them to seal the most surprising result of the Premier League season.

Watford’s superb concentration and focus were somewhat of an anomaly, as their loss to Crystal Palace the following week showed. The intangibles that are so steeped in Atletico’s footballing DNA are perhaps absent at Watford, an understandable circumstance given Pearson’s short reign thus far. Yet Pearson’s intelligence in the way he set up his team and his ability to get primarily attacking and creative players to buy into his defensive system is extremely impressive.

What is interesting about both Atletico Madrid and Watford was that they afforded Liverpool space in wide areas despite the fact that many regard Liverpool’s fullbacks as their primary creative threats. The reason for this seems to be that it was easier to limit space and win back possession in wide areas. For Atletico Madrid, this was done through astute pressing and shifting across, whilst Watford relied on the discipline of their wingers to consistently deny space and force the Reds to play the ball into congested areas. It shows how simply analyzing a team’s strengths and weaknesses are insufficient to devise an effective method of playing against them.

Irrespective of football’s potential return this season, Liverpool have dominated proceedings in the Premier League. Yet the losses to Watford and Atletico Madrid could serve as a blueprint for other sides to counter the runaway league leaders. Other teams have tried similar tactics and lost, and it is probable that more will lose in the future playing the same way. But with the right mentality and personnel and a tactically astute coach, Liverpool can be hampered by narrow defensive units and direct counterattacks out wide. Whether it will impede them from future successes remains to be seen.