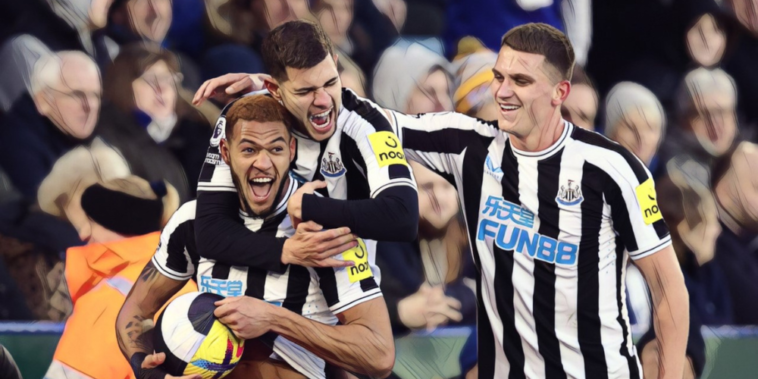 When Newcastle United was purchased by the Public Investment Fund of Saudi Arabia, many believed they would eventually emerge as a new contender for the Champions League places in the Premier League.

Few, though, would have predicted this swift of an ascendance. At the turn of the year, Newcastle sit third in the Premier League table, and with the fourth-best expected goals and third-best expected goals against, it’s hard to argue they don’t deserve to be there. It’s an astonishing turnaround from their frequent relegation fights and mid-table meandering under Steve Bruce, and is a credit not just to increased investment in the facilities and squad, but the supreme coaching of Eddie Howe.

At Bournemouth, Howe was rightly praised for maximizing the potential of a limited squad on a tight budget. Yet one of his major limitations tactically was a seeming inability to make his outfit comfortable in their rest defence. Bournemouth struggled to cope with sustained periods of opposition pressure, lacking the necessary structure and drilling without the ball to be difficult to break down.

At Newcastle, Howe has shown his progression as a coach by making The Magpies both resolute and proactive without the ball. As opposed to the stodgy 5-4-1 low-block implemented by Rafa Benitez and later Bruce,they now play in a more aggressive 4-5-1 mid-block. The wide attackers, usually Joelinton or Allan Saint-Maximin on the left and Miguel Almiron on the right, engage the press when the ball moves to the opposition fullbacks and are supported by a central midfielder and a fullback. Joe Willock, Bruno Guimares, Joelinton when played in midfield, and Sean Longstaff are all extremely energetic and are quick to apply opposition pressure. Many of them also carry a significant physical presence, adding a further dimension to the Newcastle press.

Deeper in their own half, the 4-5-1 gives excellent defensive coverage both vertically and horizontally. Sven Botman in particular is a central defender used to playing in teams who sustain defensive pressure, and the aerial ability of Dan Burn at left-back and Kieran Trippier’s proficiency in defending the back post means that Newcastle can remain compact and narrow and trust their ability to keep crosses from wide at bay.

Nick Pope is also an extremely assertive goalkeeper, capable of commanding his area and ensuring his defensive line doesn’t need to drop very deep to defend the penalty area. With this personnel, Howe has shown greater acumen in being able to drill his team to understand where and when to apply pressure and when to be more passive and close space in dangerous areas.

People will say Newcastle have spent money adding quality – and they have – but the job Eddie Howe has done with the likes of Joelinton, Almiron, Longstaff, Schär & Willock over an extended period of time now has been quite something #NUFC

Offensively, while many coaches have clear in-possession structures that are imposed on the team regardless of personnel, Howe has clearly shaped his attacking tactics based upon the players at his disposal. With Almiron and Saint-Maximin on the flanks, Newcastle mainly truly to isolate their wide players one-on-one with opposition defenders.

Crucially, though, unlike the Steve Bruce era where they often had to collect the ball in their own half and go past many players, Howe has implemented specific patterns to isolate his wingers in more advantageous situations. In Bruno Guimares especially, he has a superb progressive passer and carrier at the base of his midfield who can lure and they bypass an opposition press. Newcastle can build slowly in the centre of the pitch to draw the opposition inward, leaving space out wide for the wingers to exploit once Guimares can break the press and find them.

Howe also encourages his team to build attacks differently on each flank. On the left, Burn sits deeper and more central to allow Willock or Joelinton to push up and combine with Saint-Maximin. Often, the goal of these interchanges of passing and movement is to have Saint-Maximin driving at the opposition with at least one runner from midfield in support. Joelinton can also perform a similar role on the left wing with his underappreciated ball-carrying, balance, and strength. On the right, Trippier pushes higher to either play in Almiron with passes along the outside or to push wide himself and allow Almiron to cut infield. The Paraguayan can receive and drive with the ball himself, but also loves running in behind or into space. Trippier’s movement augments him well, occupying opposition defenders and facilitating Almiron’s playing style.

Eddie Howe is the first English manager to win more than 20 Premier League matches in a single year in the 21st Century 🤯👏 pic.twitter.com/4UYLeiHOAC

Indeed, Almiron’s sensational form is one of many examples within the team of dramatic improvements in individual performances after Howe’s arrival. While Howe’s influence has taken time to have a clear effect on Almiron’s performances, it’s clear that the pressing style, partnership with Trippier in attack, and more proactive style generally have all made the most of Almiron’s explosive, pulsating approach.

Similarly, Joelinton’s reinvention as a central midfielder or left inside forward is an example of Howe’s intelligence in understanding a player’s strengths and weaknesses. While his hold-up play, box movement, and shooting technique may not be optimal for a striker, the Brazilian’s energy, dribbling, and strength make him a versatile option who can help Newcastle play through pressure and maintain a strong press. Joe Willock, once a struggling midfielder at Arsenal, now appears to have found a role and environment that best suits his traits.

Throughout Newcastle’s revival, Howe’s influence is clear. Tactically, his implementation of more proactive tactics including a more assertive press, improvements in defensive organization at set-pieces and in deeper areas, and greater structure in build-up that maximizes one-on-one situations for attackers have all improved the team.

Perhaps even more importantly, he has cultivated environment players want to be a part of. He constructs his team around the strengths of his players and how they can complement each other, and has successfully moulded a squad with that in mind. They’re seemingly simple changes that are, in actuality, incredibly difficult to implement. While the ownership of Newcastle United continues to merit scrutiny, it’s clear that Eddie Howe is becoming a truly excellent head coach.