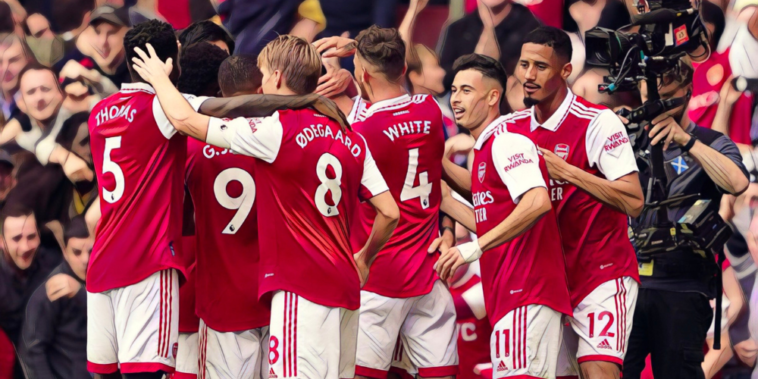 Every club is saddled with stereotypes, though naturally some stick harder than others.

Think of Everton, particularly at Goodison in front of their ferocious fans, and old-school values come to the fore. Whether they’re playing well or poorly, this is a team that favours passion and fight, with little stock placed in aimlessly passing it around the back.

Think of Tottenham and an unfortunate propensity to snatch defeat from the jaws of victory springs to mind. It’s all so very Spursy.

With Arsenal, a number of tropes persist and what is amusing about these is that even the cliches that deserve to be viewed positively are given a distinctly negative slant.

Known and admired for their passing football from Arsene Wenger’s era onwards, the Gunners’ love of possession is said to have tilted too far towards style over substance in recent years. Consequently, they have often been accused of trying to ‘walk the ball into the net’.

Elsewhere, as Wenger’s reign began to flounder, the North London side have been widely criticised for being soft-centred, sorely missing the gnarly leadership of an Adams or a Vieira, and from this came another stereotype, one that is a close cousin to Tottenham’s weakness.

Because while Arsenal would think nothing of bullying the likes of Norwich 5-0 at home, turning on the tricks and flicks and looking sensational, when it really mattered, they too regularly failed to show up, either self-combusting, or simply putting in a performance insipid by their usual standards.

This variation on bottling it was very much in evidence late last season when a Champions League spot was almost securely in their grasp. With three games to go they held a four-point advantage over their arch neighbours Spurs so only an embarrassing collapse would have them miss out. They missed out.

It was the latest in a long line of disappointments, that coincidentally or otherwise occurred when the pressure was cranked up to eleven and of course, this most Arsenal of dramas happened on Mikel Arteta’s watch, a manager who at that point had experienced crisis and success in equal measure at the Emirates.

Indeed, it was believed by many that this season would be make or break for the former midfielder. With the stakes raised even further courtesy of an atypically lavish transfer window, it was top four or bust.

Fast forward to the here and now though and every goalpost has been moved.

Arsenal will end 2022 top of the Premier League 📈 pic.twitter.com/kwnb9zNMoN

From the off Arsenal have been fantastic, winning their opening five games on the spin, a start that saw them claim top spot three weekends in, a position they have proudly retained ever since. Losing only once since August, it is an exceptional and sustained run bolstered by the best centre-back pairing the club have had in years, engineered by Thomas Partey in midfield, and propelled by an exciting quartet of attacking talent in Saka, Martinelli, Odegaard and Jesus.

Solid at the back, fluid in the final third, it finally feels like the completion of Arteta’s ‘process’, a side that presses sagaciously and has a clear roadmap in how to break opponents down. Furthermore, so consistent have they been that increasingly they resemble genuine title contenders. Perhaps they are pretenders to the throne no more.

But naturally, you already know all of this. You know it because you have no doubt marvelled too at their unexpected rise, a sharp improvement that few saw coming even after they bought shrewdly over the summer.

What is especially interesting about their elevation, however, is how their entrenched and long-standing stereotypes are beginning to fade away with every passing week.

Partey’s governing of the centre circle has impressed while foraging around him, liberated as a box-to-boxer, Granit Xhaka is a player transformed. No longer an ill-disciplined liability, the Swiss international is taking ownership of every blade of grass, as fervid as ever but now restrained. Behind this no-nonsense pair meanwhile, Gabriel Magalhaes has been a colossus; commanding, calm and brilliant.

Reporter: Did you expect #Arsenal to be 5 points clear?

Zinchenko: I’m not surprised, not because I’m here now, but because I could smell, even from last season, that Arsenal’s time was coming ❤️ #afc pic.twitter.com/8CHqtV7zoc

As for their previous want for walking the ball in, this incarnation in red and white still cherish possession, still knock it about with the best of them. But in 2022/23 to date, the Gunners have taken on the fourth highest number of shots in the Premier League, better yet backing up their bounty of efforts with the third best chance conversion ratio. Their 13.7% reveals they have a more clinical edge to Manchester City. Liverpool, Chelsea and Manchester United incidentally don’t even come close.

And lastly, we come to their habit of buckling at the first sign of adversity. It is undoubtedly the most Arsenal of stereotypes, and one we all witnessed just last May.

Factor in a couple of other games that would have definitely seen Arsenal sides of old shaken and full of self-doubt – one being a triumphant North London derby that had Harry Kane cancel out an early lead – and we can confidently surmise that the current league leaders possess a backbone. That they turn up on the big afternoons and they believe in themselves.

It could still unravel, of course, it could. Across a long season that is true of any team striving for greatness.

But what is striking at present is the Arsenal of today feels so very different to the Arsenal of yesteryear. Not just better but shedding their inherited reputation as they go.