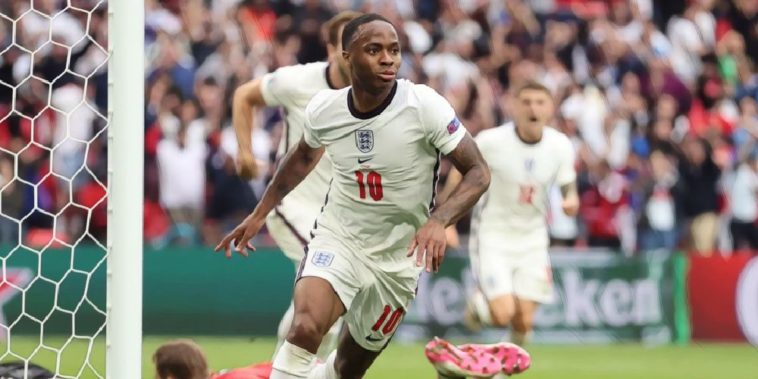 England progressed the last eight of the European Championships with a memorable victory over old rivals, Germany.

Much had been written in the buildup to the Wembley encounter, a fixture which evoked plenty of memories of when the two sides met back in 1996, with Germany dumping the host nation out at the semi-final stage on penalties before going on to lift the trophy against the Czech Republic.

This time, the two teams were thrown together at the last 16 stage, England having topped their group despite three unconvincing displays, while Die Mannschaft finished second in the so-called Group of Death which featured France, Portugal and Hungary.

Germany started the brighter at Wembley and had a number of chances to take the lead, the pick of the bunch falling to Timo Werner, only for the Chelsea striker to see his effort smartly saved by Jordan Pickford.

England did however grow into the game and saw Harry Kane squander a very presentable chance to take the lead before the break. The second half was a little more measured than the first, but just as it looked like it may be heading towards an extra 30 minutes, the hosts snatched the lead; Raheem Sterling arriving in the six-yard box to meet Luke Shaw’s low cross to fire home his third of the tournament.

Harry Kane has looked a shadow of his often prolific self so far in the competition, but sealed the Three Lions’ place in the quarter-finals as he finally got himself off the mark with four minutes to play, stooping to get on the end of a Jack Grealish cross from the left to leave Manuel Neuer with no chance.

The win provided some kind of redemption for manager Gareth Southgate – who missed the decisive penalty 25 years ago – and while he conceded he can’t fix the hurt of that night in ’96, he is pleased to provide new memories, before reminding everyone of the job still to do.

“I am just so pleased,” he told the BBC.

“I was looking at the big screen and saw David Seaman up there. For my teammates that played with me I can’t change that so it will always hurt, but what is lovely is we have given people another day to remember and now we have to do it in Rome.

“I just thought it was a brilliant afternoon. We have talked about bringing enjoyment to the nation and afternoons like this are what it is about. The players were immense right the way through the team and the fans were as well. It was as a good an atmosphere I can remember at Wembley.

“We deserved to win but I am the party-pooper because if we go and don’t do it on Saturday it won’t count for anything.”

Despite his positive performance against Czech Republic last week, Southgate opted to drop Jack Grealish back to the bench as he matched up Joachim Low’s side and played with a three-at-the-back, and the England boss admitted he would have been ‘dead’ if the result would have gone the wrong way.

“You know that if you change the shape, you pick certain personnel over others and it goes wrong you are dead,” he said. “We had to go about it in the way we believed. We felt speed in behind Harry Kane would cause them problems and I thought Saka and Sterling right from the start created that jeopardy in their back line.

“Our whole team defended brilliantly all the way through. It was a fabulous performance, I can’t give enough credit to the players.”

There were question marks over the inclusion of Raheem Sterling for the tournament opener against Croatia, though the Man City man has more than repaid the faith shown in him so far with three goals in four games. There have also been doubts about skipper Harry Kane following some anonymous displays so far this summer, though Southgate said he has always had faith in the attacking pair.

“They [Sterling and Kane] both have to prove people wrong all the time and Raheem has been immense for us over a period. We have that faith in him and trust in him and his performances have been electric right from the start.

“For Harry when you are a centre forward you need those goals, I was pleased to see that second one go in.”