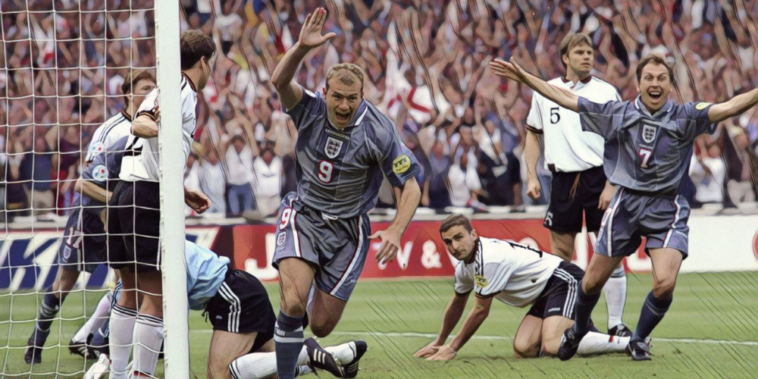 England against Germany. It’s one of international football’s most historic rivalries with the latest instalment set to for Wembley in the last 16 of Euro 2020 on Tuesday evening.

The two nations have played out some classic contests in major tournaments throughout the years, though it’s fair to say that it is Germany who have often enjoyed the better of the rivalry on the biggest occasions.

As European football prepares for what promises to be a fascinating showdown at Euro 2020, we look back at every previous England vs Germany clash at a major tournament.

The first meeting between the nations in a major tournament saw England enjoy their finest footballing hour, winning the World Cup for the very first time following a thrilling final on home soil.

Geoff Hurst wrote himself into folklore forevermore after hitting a hat-trick for the Three Lions at Wembley, with the former West Ham forward remaining the only man in history to net a treble in the World Cup final.

England had never previously lost to Germany heading into their 1966 final meeting (a far cry from the following five decades), with Alf Ramsey’s side maintaining that undefeated record following an extra-time success.

Helmut Haller opened the scoring for West Germany with a low effort after just 11 minutes, though the host nation restored parity eight minutes later as Hurst headed home his first of the game.

Martin Peters looked to have won the trophy for England after rifling home in the second half, but a last-minute equaliser from Wolfgang Weber forced the final into extra time.

Hurst, however, proved the difference with two goals in the additional period, the first controversially awarded by linesman Tofiq Bahramov after his shot crashed down off the underside of the bar, before racing away to thump home the clincher amid the backdrop of Kenneth Wolstenholme’s iconic BBC commentary.

Four years later and the two teams resumed rivalries in the quarter-finals of the 1970 World Cup in Mexico, though it was West Germany who prevailed this time following a comeback win in energy-sapping heat.

England were two goals ahead following the opening hour with the world champions seemingly on their way to the semi-finals, before tiring visibly as West Germany outlasted the Three Lions to force the clash into extra-time.

Franz Beckenbauer pulled one back for the Germans, before Uwe Seeler’s header levelled the scores with just eight minutes remaining and cancelled out England goals from Alan Mullery and Martin Peters.

Gerd Muller struck the decisive third for West Germany in extra-time and the holders – who were missing Gordon Banks through sickness – were out.

The clash proved to be the final fixture of Bobby Charlton’s England career, with the Manchester United midfielder – who had been substituted for Colin Bell shortly after Beckenbauer’s goal – asking Ramsey not to consider him for selection again.

England were eliminated from the 1982 World Cup despite going unbeaten in their five fixtures, Ron Greenwood’s side qualifying from the first group stage with a flawless record of three wins from three.

The 1982 edition of the tournament featured a second group which pitted England with West Germany and Spain, with the Three Lions playing out goalless draws with both sides.

England struggled to find a way past West Germany in their opening fixture of the second group phase, both sides cancelling each other out with the former’s cautious approach – including leaving Glenn Hoddle out – contributing to their elimination as the Germans beat Spain 2-1 in the group’s other fixture to progress.

Paul Gascoigne’s tears in Turin perhaps embody the ‘years of hurt’ England have suffered since winning the World Cup in 1966, the midfielder’s uncontrollable emotions spilling out as the Three Lions came heartbreakingly close to another final appearance at Italia ’90.

Bobby Robson’s side had somewhat fortuitously progressed to the last four of the tournament, finishing as group winners in unconvincing fashion, before a dramatic late win against Belgium and a narrow victory against Cameroon in the quarter-finals.

West Germany had reached this stage for the sixth time in their past seven attempts and had done so with minimal fuss, but it was England who started brightly with Chris Waddle rattling the crossbar from distance.

The Germans grew into what proved an open game and opened the scoring on the hour, Andreas Brehme’s free-kick taking a wicked deflection off Paul Parker to dip over the helpless Peter Shilton.

England – with Gascoigne at the heartbeat of the side – hit back, however, levelling with 10 minutes remaining as Gary Lineker drilled a low left-footed effort home to force extra-time.

Gascoigne’s mistimed challenge later led to a yellow card and an infamous reaction after realising he would miss the final should England get there, with the semi-final showdown heading to a shoot-out.

We all know how England against Germany from the spot turns out.

Euro ’96 and England met Germany in the semi-finals of a major tournament once more, the former roared on by a raucous home support as ‘football came home’ at the European Championship.

Terry Venables’ team had impressed in reaching the last four, securing memorable group stage victories over Scotland and the Netherlands before beating Spain on penalties – the nation’s first ever shoot-out success – in the quarter-finals.

Once again it was old rivals Germany who were standing in the Three Lions’ path to the final, though the clash could hardly have began better for England as Alan Shearer opened the scoring at Wembley after just three minutes.

Stefan Kuntz levelled for Germany soon after, but England had more than enough chances to win the game in normal time as Shearer headed wide, Stefan Reuter cleared off the line and Darren Anderton hit the post with a gaping goal.

Perhaps the crucial moment was Gascoigne’s agonising stretch that fell just short of meeting Shearer’s cross-shot, with penalties once again the deciding factor in the semi-final of a major tournament.

Once again it was Germany who prevailed, Gareth Southgate enduring Wembley woe after seeing a tame effort saved by Andreas Köpke.

England and Germany had been two of the best teams in Europe four years earlier, with the pair drawn together in the tournament’s ‘Group of Death’ alongside Portugal and Romania at Euro 2000.

As it turned out, the duo competed for the most embarrassing exit rather than the trophy itself, with both teams crashing out at the group stages after miserable campaigns in the Netherlands and Belgium.

It was England who claimed bragging rights in their meeting as Alan Shearer scored the only goal of the game, though it mattered little as a catastrophic late defeat to Romania saw Kevin Keegan’s side make an early elimination.

Germany joined their rivals after finishing bottom of the group with just a single point, the holder’s poor performances leading to a mass restructure of German football following the tournament.

England will be hoping for a marked improvement on their last major tournament meeting with Germany more than a decade ago, the Three Lions thrashed in comprehensive fashion by their old rivals at the 2010 World Cup in South Africa.

Fabio Capello’s team had laboured through the group stage with poor performances in draws with the United States and Algeria, sneaking through as runners-up courtesy of a narrow win over Slovenia.

With the scores at 2-1, England were controversially denied a justified equaliser, as Frank Lampard’s long-range effort clearly crossed the line but was incredibly not spotted by the officials, though in truth, were outclassed, outfought and outrun by an emerging German side in Bloemfontein.

Miroslav Klose, Lukas Podolski and a Thomas Muller double secured an emphatic win for Germany, who were incisive, inventive and clinical throughout as Mesut Ozil pulled the strings in midfield.

It was another sorry showing for England at a major tournament, whilst a youthful Die Mannschaft side reached the semi-finals, before winning the World Cup in Brazil four years later.

Read – Euro Classics: The Czechs and Holland serve up an epic attacking encounter in 2004