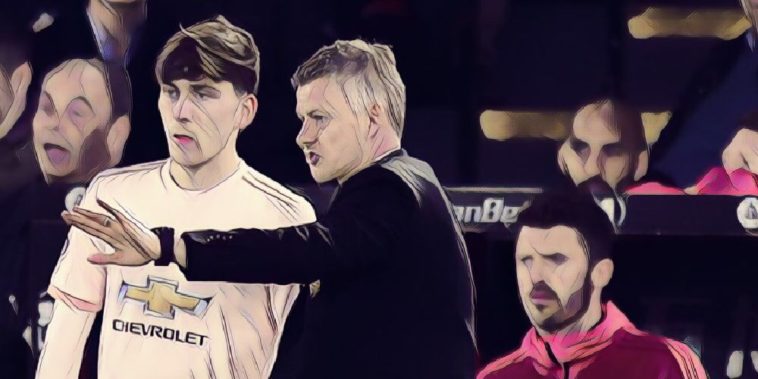 Ole Gunnar Solskjaer reckons Manchester United youngster James Garner could have a ‘great future’ after he made his senior debut for the club on Wednesday night.

The Birkenhead born midfielder came on as a 90th minute substitute in Manchester United‘s 3-1 win over Crystal Palace on Wednesday evening, and while he didn’t get a touch of the ball, caretaker manager Ole Gunnar Solskjaer has likened the 18-year-old to club legend and current coach, Michael Carrick.

“I believe he’s got the chance to have a great future,” Solskjaer said in his post-match press conference.

“Of course keep working, he knows we believe in him. We’ve got great faith in him as the next Michael Carrick.

“I know he’s young and I know it’s not fair on kids to compare to great players like Michael was, but he’s the same mould, he plays simple passes, plays through the lines. Scott McTominay did really well today, some of the passes through the lines into Paul were excellent.

“You’re at Man United, so Michael had the pressure of coming in after Roy Keane, that’s just the way it is at Man United.”

“We’ve been waiting for that chance. With Nemanja and Ander injured there’ll be more chances for Jimmy, we might even see him against Southampton on Saturday.”