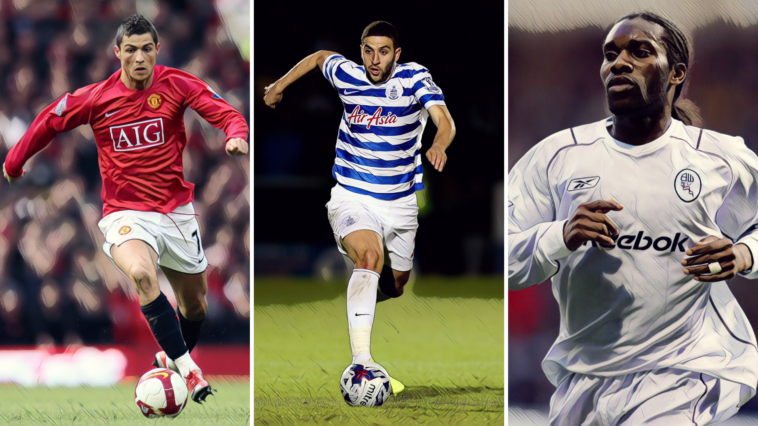 Whilst the pressures of winning football matches tends to dominate headlines at the highest level, there’s nothing quite like seeing players enjoying themselves out on the pitch.

Throughout the years fans have been wowed by some sublime skills from Premier League stars, players unafraid to express themselves and try something out of the ordinary.

Whether it’s an innovative and unique piece of trickery or a staple of the game executed in fine style, fans often delight in the art of the showboat and players bringing pizazz to the Premier League.

We’ve decided to pay tribute to some of the most notorious crowd pleasers in the division’s history, a collection of players who prided themselves on humiliating opponents with fancy footwork.

Here are five of the Premier League’s most great entertaining players:

‘So good they named him twice’ was the phrase often heard when referencing Jay-Jay Okocha, the sublimely skilled Nigerian who enjoyed a fine Indian summer in the unlikely location of Bolton.

This was a player whose career had been spent dazzling at clubs such as Frankfurt and Fenerbache, before becoming the Parisian poster boy of a cult Paris Saint-Germain side, his twinkle toes the inspiration of a team containing Nicolas Anelka, Mikel Arteta and a young Ronaldinho.

Once the most expensive African footballer of all time, Okocha moved to the Premier League on a free transfer as PSG looked to cut their wage bill, becoming one of a number of shock signings to join Sam Allardyce at Bolton.

Big Sam has developed a deserved reputation for overseeing some turgid football in his career, but his Bolton side were a mix of eclectic talents with Okocha the leading light.

Okocha cared little for reputation, if he faced you up there was only going to be one outcome.

Drag backs, step-overs and one notorious rainbow flick over a bewildered Ray Parlour, Okocha helped transform Bolton from relegation candidates to European qualifiers, inspiring those on the pitch alongside him and astonishing those off it.

The game could do with more players of Okocha’s care-free quality.

Cristiano Ronaldo’s evolution has seen him transform from fleet-footed prospect into one of the finest footballers of all time, the greatest goalscorer in football history and a five-time winner of the Ballon d’Or.

Whilst the forward’s insatiable drive to score goals and become the best is well publicised, the early version of Ronaldo that lit up the Premier League is one that holds a special place in the hearts of fans.

Arriving at Manchester United as an 18-year-old, the winger was whirlwind mix of step-overs, chops and flashy footwork, his desire to entertain the crowd often coming at the cost of irking his own teammates.

Ronaldo was electric in possession and often left opposition full-backs contorted and confused, his dancing feet leaving no shortage of defenders with twisted ankles and bruised egos.

If ever there was a player who delighted and frustrated in equal measure, it was Adel Taarabt.

The Moroccan’s magic had seen him compared in style to a certain Zinedine Zidane as a young player, though his story is one of a flawed genius who would never reach his true potential.

He did, however, leave a lasting impression on English football with a scintillating period at Queens Park Rangers, inspiring the club to promotion to the Premier League before bringing his box of tricks to the hightest level.

Taarabt was a street footballer in every sense of the world, the type of player who would nutmeg opponents without a second thought and laugh at their expense as he collected the ball on the opposite side.

His work ethic was often questioned, but running wasn’t his gig.

Taarabt was genius and not graft, a piss-taker of epic proportions, a player who brought the fun factor and made a mockery of those who tried to stop him in his tracks.

Robinho’s arrival in the Premier League remains one of the most stunning signings the league has seen, the Real Madrid star signing for Manchester City in a British transfer record.

This was a Manchester City side that had finished ninth the previous season, but an Abu Dhabi-led takeover late in the transfer window meant the club were after a statement signing and Robinho arrived at the Etihad.

Robinho had been labelled, somewhat unhelpfully, as ‘the next Pele’ at former side Santos, and here he was being paraded by a side without a major trophy in more than three decades.

His impact was instant with a debut goal against Chelsea – a side he so nearly joined before City hijacked the deal – before netting a hat-trick in his fifth league game against Stoke.

Robinho was the big fish in a small pond that the club’s ownership wanted to turn into an ocean, delighting the crowds with a full repertoire of tricks and flicks, including an audacious scoop to score against Arsenal.

After a bright start he fizzled out, but the memories of a natural entertainer remain, the first major signing of what has become a glittering era for the Etihad side.

You get the impression that Yannick Bolasie would swap a perfectly executed showboat over three points, such was the winger’s desire to embarrass opponents when at full flight.

Beginning his career in the humble settings of non-league and Malta, Bolasie’s imaginative style soon won admirers with his best years coming in the colours of Crystal Palace.

Such was his unorthodox and innovative style of dribbling, it was entirely probably Bolasie did not know what trick was next to be pulled out of his magic hat, leaving opposition full-backs entirely helpless.

Bolasie’s bamboozling of Christian Eriksen during a game against Tottenham saw his outrageous turn christened the ‘Bolasie 360 flick’, the ultimate salute to a stylish showboater.