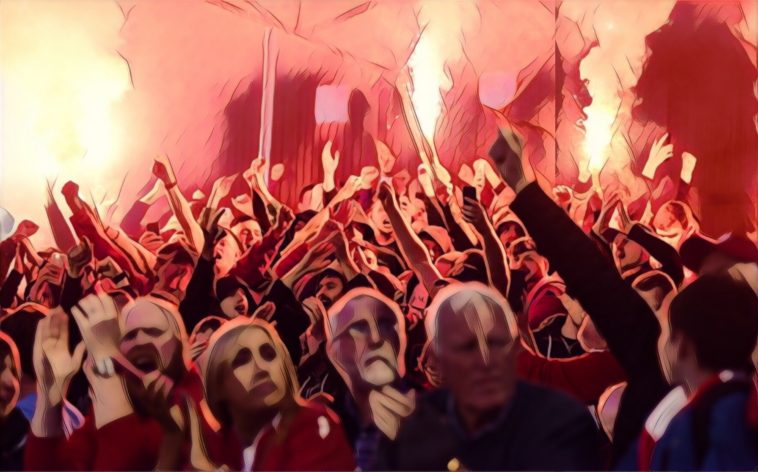 In this week’s League of Ireland column, there’s Shelbourne’s promotion back to the top flight, Dundalk secure the first part of their treble bid, and searching for the positives from Bohemians’ defeat to Waterford.

After falling short last season, after enduring a rocky start to the campaign, and carrying the burden of the favourite’s tag, Shelbourne ensured their status as a Premier Division club next year with victory over Drogheda United on Friday with a week to spare.

The Drogs themselves could have made the title race run until the last weekend with a win here, but instead it was the visitors who left as First Division champions after winning 3-1.

What a night at United Park ?

All the goals as @shelsfc seal the First Division title and promotion to the Premier Division with a 3-1 victory over @DroghedaUnited ?

In front of a sellout crowd of 2,956 at United Park, the Reds broke the deadlock on 64 minutes through Aidan Friel, but the home side responded with a goal from Luke McNally. Late goals from Oscar Brennan and Lorcan Fitzgerald clinched the three points though, preceding scenes of joy and delirium from the Shels faithful. Next season will be their first time in the top flight since 2013.

Oscar Brennan lines up his shot for Shelbourne’s second goal.

With the quality they possessed in their squad, Shels were always expected to win the league, but huge credit must go to their manager Ian Morris. The former Leeds United player is only 32 years of age and in his first managerial role. He was still playing up until last year, and was expected to line out for Bohemians again this season before surprisingly moving to the dugout to take over their cross-town rivals.

To win the league in his first campaign as a gaffer in such a competitive division with both Longford Town and Drogheda looking good for a title tilt at various points is some achievement. But the real test is yet to come, and the Premier Division will ask entirely different questions of them.

Since their demotion to the second tier for financial irregularities in 2006, the Reds have returned to the top flight just once. They stayed up that season, but were sent crashing back down the year after, finishing dead last with a dismal five wins out of 33 games.

And as both Finn Harps and UCD have shown this year, bridging that gap can be arduous and challenging, but Shels should have more quality than both of those teams going into next year. Presuming the Students go down, 40% of the league will be comprised of Dublin teams — which could rise to half if Cabinteely FC win the playoffs — which means a lot of tasty derbies, if not a good spread of clubs around the country.

Why are clubs choosing youth over experience for managerial roles?

The first silverware of the season has been handed out and it would have to be Dundalk who pick it up. The Lilywhites twice had to come from behind to get an equaliser, with Michael Duffy and Sean Gannon cancelling out goals from Derry City’s David Parkhouse and Junior Ogedi-Uzokwe.

The two sides could not be separated after 120 minutes, and so it went to a penalty shootout, in which Chris Shields scored the decisive spot-kick in sudden death.

With the league title virtually wrapped up with six games to go, Dundalk are potentially just two cup games away from completing the hallowed treble. It would be an astonishing feat given how many key players have moved to England and Scotland in recent years, as well as losing their instrumental manager Stephen Kenny to the Ireland U21s. If they are not already considered the greatest LOI team of all-time by now, they likely will be by the end of this year.

As for Derry, this defeat was a bitter one to swallow, but they can be proud of how they have performed, pushing the league champions to their very limit. Few teams have tested Vinny Perth’s side quite as much as them, earning three 2-2 draws since losing to the Louth outfit back in March. The two clubs meet again for the last time this season in just over a fortnight, let’s hope it’s as competitive as we have come to expect.

City had a particularly strong desire to stop the visitors, as they are the only Irish team to have completed the ‘modern’ treble, which they did in 1989. Shamrock Rovers and Bohemians both achieved the treble, although that was when the now defunct League of Ireland Shield was still a thing. The Candystripes can claim to be the only ones to have won the trio of league, FAI Cup and League Cup trophies. For now.

Manchester City and a short history of treble successes

Yet again Bohemians suffered a disappointing result for a game in which this writer was in attendance. I was there for Conan Byrne’s wonder strike from the halfway line a couple of years ago, the drawn semi-final against Cork City last season that they deserved to win, and couple of other underwhelming games in between.

I attend merely as a neutral observer, and yet some of the supporters may come to see me as some sort of bad luck charm. I was starting to feel that way myself after seeing the Gypsies endure a series of unfortunate events against Waterford this past Friday night.

What a finish from Tom Holland! Waterford re-take the lead against Bohemians #RTESoccer pic.twitter.com/Ip2J03xEjZ

Firstly Luke Wade-Slater missed a glorious chance from no more than two yards from the goaline, his shot bouncing off the bar before going safely out for a goal kick. Not long after the same player knocked the ball into his own net after goalkeeper James Talbot had just made a save. Calamitous.

Then, with Bohs chasing an equaliser in closing seconds of the game, the referee missed a hand ball in the box. To be fair to the official, it wasn’t the most obvious of infractions and needed a few replays to show that it definitely was a hand ball, but it was still a sickener for the home side.

Controversy at the end as Waterford claim a crucial win over Bohemians at Dalymount Park #RTESoccer pic.twitter.com/yUjhzpVy6f

Regardless there were some positives for the Dublin outfit to take from the game. Missing a number of key players, such as Daniel Mandroiu, Keith Buckley and Darragh Leahy, some of the team’s youngsters stepped up and showed they can perform at this level. Ross Tierney, in particular, showed he is a bit of a baller, and the 18-year-old can develop into a first-team regular in the next year or so.

But the reality is that this was a bad result for Bohs. They remain in third place and the last European qualifying spot, but are now only two points ahead of Derry who have a game in hand. Those two meet this Friday in what could turn out to be the deciding fixture in who finishes third at the end of the campaign.

A quick note on Cabinteely, who secured a place in the promotion playoffs for the first time in their short history this past week. A 3-1 win over Athlone Town was enough to finish in fourth place ahead of Bray Wanderers, who also beat Longford 2-1 on the night.

@RobertManley97 keeps breaking records. The @SSEAirtricityLg First Division top-scorer has now netted 17 times in the league; 18 in all competitions. Both clubs records this season. He has also scored in all three games against @AthloneTownAFC this season. pic.twitter.com/zdxtD3KnB6

No matter what happens from this point, the campaign has been a huge success for the Stradbook club. With bigger clubs who recently dropped down from the Premier Division like Bray, Limerick and Galway United also in the mix, they weren’t expected to do this well. But now they have the chance to shock the entire country by going one step further.