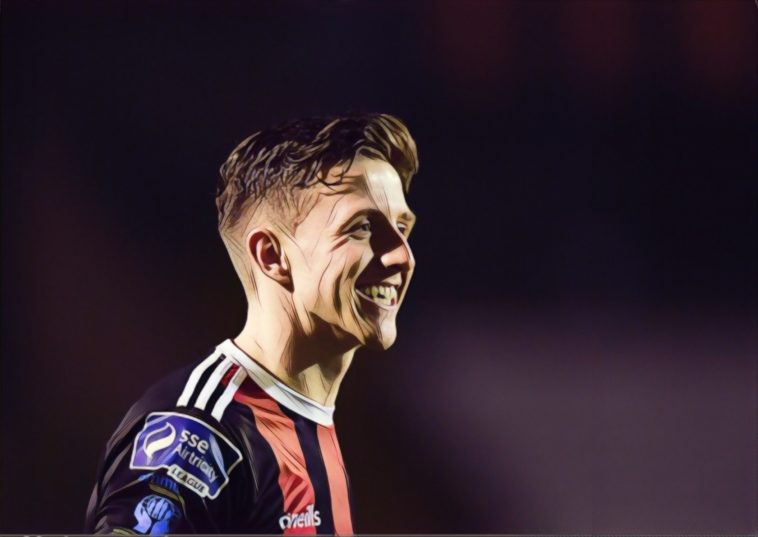 Keith Buckley sits down for a chat about Bohemians, growing up as a Shels fan, how the inner city moulded him as a player, why diversity is good for football and Ireland.

The inner city has been known to create a few crafty footballers over the years. The likes of Johnny Giles were known as ‘street footballers’, players who could dazzle you with their skill but were also perfectly capable of handling themselves if a scrap ever broke out.

We don’t know if Keith Buckley ever got involved in fisticuffs growing up, but we know for sure football had a massive influence on the Bohemians midfielder, as it did for so many young lads of his generation. “There’s a football pitch there in the middle of the flats” on Pearse Street where he would partake in organised five-a-side games between the various flats. There were more than a few “tasty” challenges in those contests, but it was during these matches that he picked up the skills and traits that made him a League of Ireland footballer.

Cognisant of the wider impact of football, the 27-year-old is clearly aware of the power of football in bringing people of all colours and creeds together.

“Football is a huge thing,” said Buckley. “You meet so many diverse characters through football. Certain different sports will have different backgrounds. For instance rugby, I don’t know anyone from the inner city that plays rugby, the people who play seem to be from similar enough backgrounds. Whereas in football you have people of all ages, different cultures, everything like.

“You have Aymen Ben Mohamed, who is playing in Tunisia, and he was playing in the African Cup of Nations only recently. He’s Muslim, from Sandyford, and I got to play with him.”

That outlook spreads to everyday life too, and the Dubliner, who works as a painter when he’s not playing football, is enamoured with the diversity of modern Ireland:

“It’s all different nationalities now, even just walking down the street in Dublin you see it, it’s great. It was only last week I was walking through town and I saw so many different people from different countries and places, it’s a multicultural place. It’s coming on so much like.

“I think it’s great, like.  You just see people coming from everywhere to work and a lot of people love Dublin as a city. I’d love to come to Dublin city as someone who doesn’t live here. I love to see what my perception of it would be coming in as an outsider. ”

Buckley grew up a Shelbourne fan, but he ended up playing for Bohemians. An awkward situation given the two sides play each other this week in the FAI Cup. He even missed a penalty against his old flame a few years ago in another cup tie, but he takes it all in his stride now. He’s been at Bohs so long now that he’s practically “converted to the Bohs!”

?????? Artist Niall O’L (who also did Phillo and Bob in Dalymount) has just finished his latest piece today at @onthebackpage – hopefully unveiling another in D7 tomorrow ?

But how did he end up being a Dalymount favourite and not at his childhood club?

“Some of the lads I played with at Belvedere, like Roberto Lopes, ended up going to Bohs so I went the same way,” he says. “I was invited to Shels as well, but at the time Bohs were top of the table and obviously if you’re a young lad and one of the top clubs in Ireland are looking at you…”

Buckley had his early career all mapped out, planning his progression to the senior team in a very clear way. He called it his three year plan, where he would climb each rung of the youth system before making the first team by the third year. Then financial disaster struck the club and the young players had to be thrown in at the deep end to make up the numbers. His plan was accelerated by two and a half years.

The club has done its best to put the bad days behind, and now they are practically thriving, on the pitch at least. They sit third in the table, occupying the last European qualification spot, and are still in three cup competitions. With so little money in the club to spend on players, what is the secret? How does the management team of Keith Long and Trevor Croly do so well on a shoestring?

“I don’t know what it is,” admitted Buckley, who was speaking at the launch of Dublin City Sportsfest. “Together they are just a good match. They have good qualities and they bounce off each other in a way. But whatever it is, it just works. The two of them are so focused.”

“Trust in the players is a big element in the mix too. “If we need any improvements, they’ll put it to the group. So it might be, “right, we need to score more goals” or “we need to get the ball wide quicker”, and they’ll give us feedback and let us know what they think. But ultimately they’ll say “it’s down to youse and how you feel” on the pitch.

“It’s not a dictatorship. You have to have feedback from the players, because we’re the ones on the pitch. So we’ll share ideas and work together, and that’s what I think is great.”