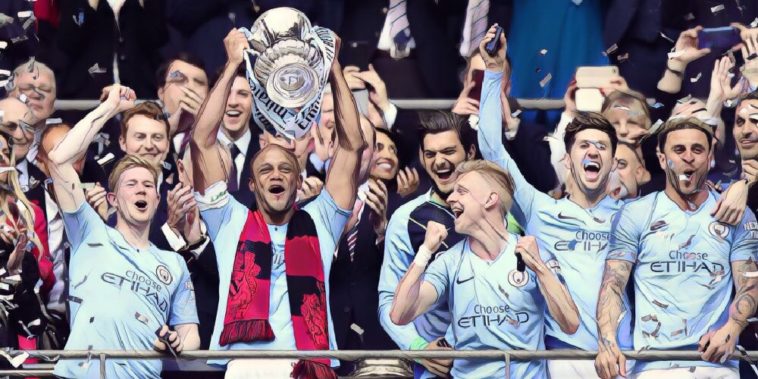 Man City became the first men’s team to win a domestic treble in the history of English football, but which other teams have won three trophies in one season.

In the end it was as predictable as it was unprecedented. Manchester City cantered to victory over Watford in the FA Cup final in May, defeating Javi Gracia’s side by six goals to nil, thus completing a domestic treble.

Although no men’s team had completed the feat in English football before this season, it was achieved by Arsenal Ladies in 2007 and 2009. (The first time around Arsenal won the quadruple, including the Uefa Women’s Champions League). They are the only two teams in England to have done it, but how rare are treble successes? Where does this one stand in the annals of football history?

This is how easy it is to help normalize and slowly remove bias from women’s soccer. 👏🏽 pic.twitter.com/KKBSRShaBt

Manchester United famously became the first English club to win a treble of any kind when they captured the Premier League, FA Cup and Champions League all in the one season. But it was Celtic who were the first club to ever win a continental treble in 1967, which they did either side of two domestic trebles. The Glasgow outfit just won a Treble Treble of domestic trophies, following victory over Hearts in the Scottish Cup final, the seventh treble in their history.

Sticking with continental trebles, Celtic’s record was matched just five years later by Ajax, led by coach Rinus Michels and their star player Johan Cruyff, who won the Eredivisie, KNVB Cup and European Cup in 1972. Not to be outdone by their local rivals, PSV Eindhoven did the same 16 years later. That team featured great players such as Soren Lerby, Ronald Koeman and Wim Kieft, with the latter two helping the Netherlands win Euro 88 later that summer.

Man United were at least the first side from any of the top five leagues to win all three, and were only joined by Barcelona, who, incidentally, did so in 2009 by beating the Red Devils in the Champions League final in Rome. At that point continental trebles were a rare thing indeed, a once-in-a-decade occurrence. It’s extraordinary to think that the Real Madrid teams of the fifties, nineties and the past few years have not done it at least once.

Barcelona’s win seemed to inspire a spate of trebles though, with Internazionale (2010) and Bayern Munich (2013) doing so soon after. Barcelona themselves did it again in 2015, becoming the first team to win a continental treble twice.

The only other English team to have won a trio of trophies (not including the blooming Community Shield) in one season is Liverpool, who claimed the fabled Mickey Mouse treble in 2001 by winning the League, FA and Uefa cups. The Reds also won the European Cup, First Division and League Cup in 1984. Everton came so close to becoming the second English team to do it in 1985 however, when they won the English First Division and European Cup Winners’ Cup but lost to Man United in the FA Cup final.

Domestic trebles are a somewhat odd phenomenon in that not every nation has three competitions that the top clubs can compete in. French football does, and has seen PSG claim three since 2015. The Parisian’s missed out on it this year after losing to lowly Guingamp in the Coupe de la Ligue quarter-finals before also falling to Rennes on penalties in the Coupe de France final. Like City, their financial muscle makes them simply too strong for their competitors (they’ve won six of the last seven league titles).

If we step away from Super Clubs for a moment, we find that Rangers have done it more than anyone else. The Scottish side have done it seven times, the last of which came in 2007, although Celtic could also equal that record this year.

Benfica (2014) and Bayern Munich (2000) are two big clubs that have also completed trebles this century, while the most notable trebles outside Europe perhaps belong to Brazilian outfit Cruzeiro (2003) and Atletico Nacional (2014) of Colombia.

It has also been achieved by a number of clubs who feature in minor leagues down through the decades, but here are some that stood out; Sofia in Bulgaria is home to two treble successes thanks to Levski (1984) and CSKA (1989), while Toronto can also claim the same thing in two entirely different eras of north American football.

Toronto Croatia won one of sorts, by winning the NSL Cup as well as being champions of both the regular season and the playoffs, while Toronto FC — the most recent addition to this list before City — replicated that feat by winning the Supporters’ Shield, MLS Cup and the Canadian Championship in 2017.

They, along with Dublin and Glasgow, are the only cities to have two teams win a treble. And, now that Manchester can be added to that roll call, that bit of trivia might come in handy in a table quiz someday.

City’s winning of the Premier League, League Cup and FA Cup is no doubt impressive. No one has been able to do it before now, and Pep Guardiola — who, as far as I am aware, is the first manager to win a treble with two different teams — has created a supremely wonderful team that could lay claim to being the best in the world.

But their vast wealth and advantages over the chasing pack make this accomplishment seem a bit hollow. Liverpool pushed them as far as they could go, both teams finishing on 98 and 97 points respectively, but that feels like an anomaly, the kind of title race that can’t possibly be replicated (remind me of this in twelve months time when Liverpool win the league with 100 points). Meanwhile, in the cup competitions, they handily defeated the likes of Fulham, Burton Albion, Burnley, Newport County, Swansea City and Brighton. Their biggest test came in the form of Chelsea at Wembley in February.

City’s completion of the treble by trashing Watford 6-0 at Wembley didn’t feel like a historic moment in English football. Rather it felt like a new normal, one in which Man City rule the footballing world and we just live in it.